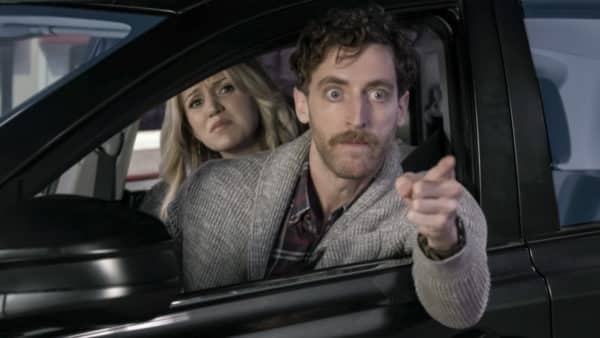 “Die Alysis” – When Drew’s condition worsens, he needs to make sure Gina is still serious about donating her kidney and winds up making her an offer she can’t refuse, on B POSITIVE, Thursday, Nov. 12 (8:31-9:01 PM, ET/PT) on the CBS Television Network. Pictured (L-R): Annaleigh Ashford as Gina and Thomas Middleditch as Drew. Photo: Best Possible Screengrab/CBS ©2020 CBS Broadcasting, Inc. All Rights Reserved

The episode opens with Drew (Thomas Middleditch) talking to God about his current situation when his doctor tells him he now needs dialysis. Once he is off the phone, he tells God (or dude, as he calls him) that he is not going to believe this new turn of events.

The next day, he enters dialysis,where he meets Gideon (Darryl Stephens), who snarks at him for being late and takes him to meet his dialysis mates and says he is the best. Eli (Terrence Terrell) is a former NFL player who likes to remind people of his glory days, and Jerry (David Anthony Higgins) a dentist. Samantha (Briga Heelan) is a workaholic who is lying to her boss about her condition. They tell him that he is replacing Cheryl, who got a donor. He struggles to tell them he has a donor, but they figure it out anyway.

Gina (Annaleigh Ashford) is working when Drew calls her to meet up. The people on the bus tease her about him, saying that he might not need a kidney and want her instead.

Drew and Gina meet for coffee to discuss his situation changing. She is distracted by her motorcycle and getting free coffee, but she then tells him he has her word that she will give her kidney and she has been sober for three days….just not in a row.

Gina goes to the restroom when (Sara Rue) calls and asks Drew to switch Maddie days. He asks if she has a date but she won’t confirm or deny. He then says he is on a date and hangs up on her, but not before saying he will switch days.

Drew continues to wait for Gina, but she escaped out the bathroom window. He thinks she let him down and is being a flake again. As he drives home, she jumps in his car, hiding in the backseat. It turns out she owes money to a bad guy, but she won’t go into specifics. Drew notices a car following them and yells at the driver when they get next to each other, but it turns out it is the wrong guy. He then apologizes as Gina waves from the backseat.

Maddie (Izzy G) and Drew have dinner together and she complains he is on his phone. He asks about what is going on in her world and she says some girls in her class are on the pill. He changes the subject and gives her a pep talk that includes telling her to listen and travel. She thinks he is weird, but they hug and Maddie goes into her room, not listening to Drew anymore.

At dialysis, Gideon compliments Drew on being early and sets him up. Eli asks him what is wrong and Drew says he is afraid Gina will let him down. He, Samantha and Jerry say they were let down and at least Gina is trying to help, despite being a mess.

Drew goes to visit Gina at work. The receptionist (Kether Donahue) asks what this is regarding and calls Gina. She runs away when one of the residents (Linda Lavin) yells at him, wondering what he wants. He explains he is the kidney donor and she calls Gina to tell her it is him.

Gina finally confesses that she borrowed money from a loan shark to help a friend and now he keeps trying to find her. He offers to let her live with him so he can take care of her, but she turns him down. He leaves and her resident yells at her before leaving for water aerobics.

Later on, Gina and her friend go to her apartment, which is being ransacked by the loan shark. They slowly back away to avoid being seen.

At dialysis, everyone is getting ready to leave when Gina comes in to tell Drew that she will live with him and still be his donor. He introduces her and she says she wishes she had kidneys for everyone. Drew says she only has the one and it is going to him.

The show ends with the two of them getting used to living together and meeting his neighbors.