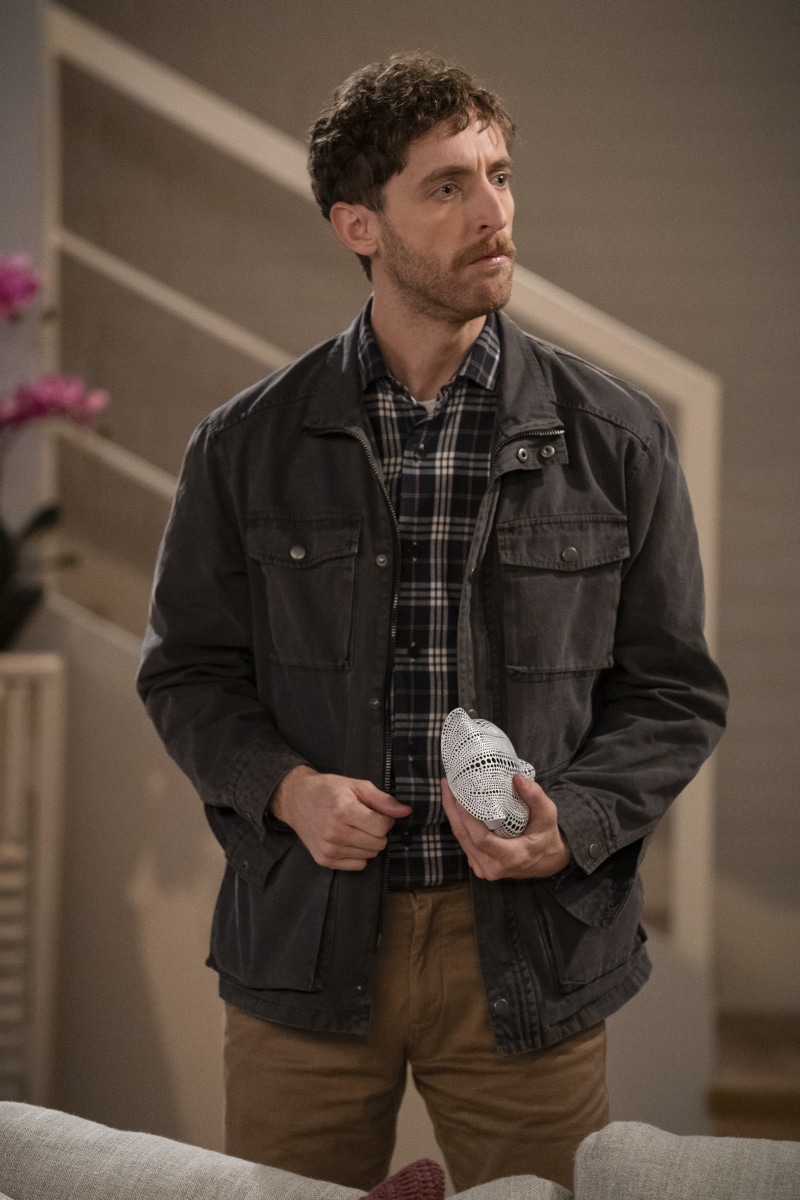 The episode opens with Drew(Thomas Middleditch) in dialysis, telling Gideon (Darryl Stephens), Samantha (Briga Heelan), Jerry (David Anthony Higgins) and Eli (Terrence Terrell) about his divorce mediation. Samantha tells him that his mediator O’Connell hates women. Drew asks how she knows this and she says they are dating.

Jerry talks about his own divorce. Eli had no idea he was married. Gideon says that Jerry was married to his college sweetheart Leslie for twelve years and that she got the house and half his dental practice. Gideon says he listens and Jerry says he told him that in confidence.

Drew says that he can’t believe they are divying up fifteen years of marriage. Samantha gives him some ideas, but Drew says he doesn’t want to play any games. She compares him to a lamb going to slaughter and baaas when he goes to leave.

Later on at home, Drew is in the bathroom when he hears a scream, causing him to pee on the floor. He rushes downstairs to see what is happening and sees Gina (Annaleigh Ashford) waxing Gabby (Kether Donohue). It turns out her other home business is waxing. Drew wonders what happened to her beer business. She says she gets her clients drunk then smooth and compares their home businesses.

Gina goes on to talk about getting rich when Gabby suggests she date the old lesbian at work who puts shots of vodka in her tea. Gina says she isn’t gay, but for 2 mill, she is open to new things. Drew tells Gina she should sleep with her because of the loan sharks.

Drew goes to leave for his mediation with Gina cheering him on. After he is gone, Gabby asks if he knows about Gina’s pot business. She says as long as she has his kidney, she has his support.

At the mediation, O’Connell (Matt Malloy) tells Drew and Julia (Sara Rue) he is there for both of them and tells them to be respectful. Julia shows Drew a list of things she wants and he tells her to just take it because it is just stuff. She says he has health issues down there and he clarifies it is an issue with his kidney, not his penis. He reiterates he doesn’t want anything and Julia still thinks he is playing games.

Gina brings her resident Norma (Linda Lavin) beer and weed. The two of them talk about Drew with Gina wishing he would be pacified with beer and weed like Norma, who says he is lucky to have her. Gina tells her she is getting the friends and family discount. Norma says another resident wants ecstasy. Gina says he is 90 years old and wonders why. Norma says he met a girl or a guy, she was only half listening.

Drew is playing the piano when Gina comes home. He talks about the mediation leading him to realize his marriage is over. This leads to him smoking weed and allowing Gina to wax his legs and talking about how much he loved being married. She says he will get married again, but he says Gina is the one and talks about them stealing an owl while they do whippets. He decides he wants the owl and realizes Julia took it, He goes to get it back, but Gina tells him she should drive. They leave, but not before he takes the whipped cream.

Gina rushes them to the hospital, where they wait for news. Gina steals snacks for her and Julia and they bond a bit. Gina says that is Drew dies they can say he went out with a bang. Julia talks about her feelings vs worry when the doctor (Emmanuel Borria)tells him he had a pinched nerve and is going to be fine. He lets Julia see her, with Gina protesting.

Drew and Julia talk about their relationship, saying they shouldn’t jump back into things. Gina pops in, but leaves when she realizes what is happening.

The episode ends with Drew back in dialysis. Eli is mad he is not in Drew’s contacts, while Samantha teases him about the penis obsession O’Connell says he has. Drew retorts that maybe O’Connell is the one with the obsession when he is the one who brought it up.

Eli continues to complain while Gideon realizes Drew slept with his ex. As they talk about it, Eli adds his name to contacts and is mad about Jerry being there.

Drew says it is over with Julia, but ends up sleeping with her again.