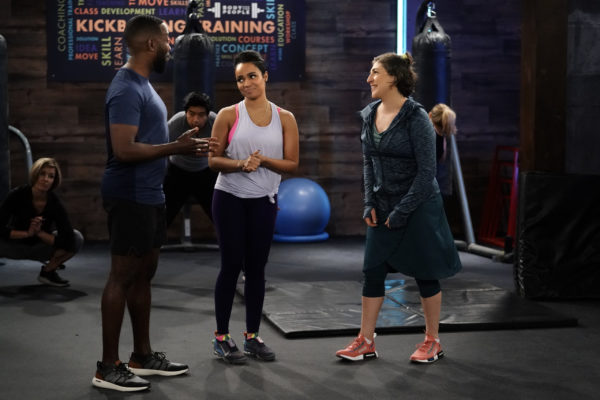 The episode opens with Kat (Mayim Bialik) telling the audience she missed us and that she was nominated for a 20 under 40 list. She shares the good news with one of her cats and gets a high five. She then says she talks about how she had the new gym jingle in her head, leading to her imagining joining the gym.

At the cafe, Phil (Leslie Jordan) talks to a woman about how they are now doing a story time for kids. She asks if they will be wine and he says yes. As she leaves, he says he doesn’t like how moms are into wine.

Kat comes in with her gym gear, saying to she had to be cut out of a sports bra. Randi (Kyla Pratt) tells her to do a zipper bra, but be careful not to zip a nip. They shudder as Phil talks about dancing for the Lord.

Sheila (Swoozie Kurtz) walks in with a lipstick for Kat, who remembers why lipstick is a disaster for her. They discuss the interview as she and Randi make plans to go to the gym.

At the gym, Kat hopes to find a gym buddy and ends up constantly hitting some random girl named Mia (Amanda Perez), who wants her to stay away. The boxing class begins with Kat being told she is beautiful by the instructor and using her mom’s criticism as motivation to do well in the class. Meanwhile, Randi and Daniel (Lamorne Morris) are partnered up, with him talking about a future wedding and kids, scaring Randi.

The next day, Kat wakes up, excited about her interview, but sore as heck.

Kat tells Randi that she is sore and wonders why she is not. Randi says she works out every day and is used to it. However, she is confused by Daniel wanting to get married after their third date. She says she called him a player, but he argued he is a for-realer.

Phil walks in with a book his mom read him as a child and shares memories. As he goes to the other room, the man doing the interview, Jordan Luther (Jim O’Heir) arrives. Kat says there are nine other people in Louisville with her name, the oldest being 93 and their ‘leader.’

He requests a cup of coffee before the interview, which Kat gets him, despite the pain. She admits

Later on, she retells the story to Carter (Julian Gant) and Max (Cheyenne Jackson), who tell her to ask for a new interview. She doesn’t think that will work and says they go to the same gym. They all offer to help her, even though Randi is with a new guy whose name she cannot remember. Carter tells her she better remember it in the throes of passion. She tells him to never say that again. Max, meanwhile, offers to be her emotional support person at the gym, recalling time he had in Paris with Brigitte (Schuyler Helford) . Kat imagines them together and freaks out in her mind.

Phil comes in, worried about the fact that his favorite childhood book may be racist. He asks Carter for advice, but he says he could not relate to many books from his childhood. Phil says he feels the same.

At the gym, Kat and Max bond over spinning and smoothies when the interviewer comes in. She goes to talk to him, but ends up getting sick and smearing the lipstick her mom promised would stay on. She later on admits she wanted validation, which is why the list was so important to her.

Randi gets ready for her date when Daniel shows up with his niece for story time. She says she has a date and he says he feels bad for him because she will be missing him. She walks off in a huff.

Phil uses storytime to tell his life story, but using cats in place of himself, making Carter cry.

Randi walks in, saying her date was canceled due to her date getting an emergency call. She and Daniel bond over missing each other at the gym, with him asking about a summer wedding.

Phil gives Kat a shoutout while she gives everyone cookies. Max is glad she is validated.

The episode ends with Kat trying to find a way out of her gym membership and everyone waving goodbye.