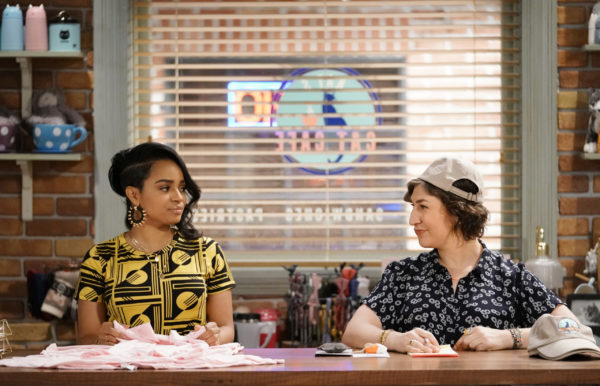 The episode opens with Kat (Mayim Bialik) at the gynecologist, saying her new doctor is so positive. The two bond a bit before discussing if Kat should freeze her eggs. Dr. Marshall (Elizabeth Ho) says it is something she should think about if she wants kids in the future, especially since she is getting older.

Kat talks to Randi (Kyla Pratt) about what to do and if Kat even wants kids. She says that she always wanted kids since she is an only child, while Randi feels the opposite. She adds that she was working while her friends were having kids and Wyatt (Tim Bagley) offers to help her out. However, he ends up creeping her out.

At the bar, Max (Cheyenne Jackson), Carter (Julian Gant) and Phil (Leslie Jordan) talk about Phil’s online dating life. He admits that he sent the guy money without meeting him, causing the others to warn him about catfishing. However, Phil doesn’t grasp what it means.

Kat tells Randi that the cat Nelly is finally being adopted when the delivery guy Steve (Adam Bartley) drops off supplies. He talks to her a bit before asking her out. She is confused at first, but finally agrees. He says he will get her number off the invoice and leaves, with her phone ringing right away. Thinking it is him, she says something silly. However, it is Dr. Marshall with some news. She tells Randi to hold her and as they hug, Wyatt tries to join in, only to get yelled at by Randi.

Kat tells everyone that the doctor said her eggs are somewhat viable, leading them to make a pros and cons list. Carter offers to let her have his kid, who has being annoying all week. Max worries about her body going through torture, while Phil wonders where the eggs go after retrieval. She says they are in a freezer and she will worry her people-cicles melting when the power goes out.

Phil gets his phone from Carter before going home. It turns out Carter was updating it and while doing so, Henry the online guy texted Phil. He says they will find out if he is real, which causes Phil to freak out.

Sheila (Swoozie Kurtz) and Tara (Vanessa Lachey) go to visit Kat, armed with maternity clothes and baby fever. Sheila offers to pay for the retrieval, while Tara tries on her old clothes. They both put on fake bellies, while Sheila talks to her about how she was never able to have more children.

Phil tells Randi about what Carter did and admits he used Max’s picture to send to Henry (Gedde Watanabe). It turns out that he is legit and ends up hitting on Max.

Kat decides to test out being pregnant with a fake belly. She ends up getting special treatment, including getting free ice cream. However, she ends up running into Steve, who is confused and no longer wants to go on their date. She confesses that it is an experiment and tells him the story as to why she is doing it. However, as she removes her belly, everyone in the ice cream shop sees and realizes she was faking her pregnancy.

Carter and Max confront Phil about his catfishing. He admits he was afraid to show the real him, so Carter, Randy and Max try to make him feel better by saying his greatest attributes. He decides to talk to the guy as Kat comes in, saying that lying is a bad idea.

Max and Kat discuss what happened and whether or not they want kids. Max says he doesn’t, but Kat says that she still unsure of what the future holds. He thinks she should go for freezing her eggs because he thinks she wants to know having kids is a possibility. They also say that they could tell her mom she is doing it and go on a cruise.

The show ends with Kat giving Nelly the cat to a little girl and Phil meeting Henry for real.