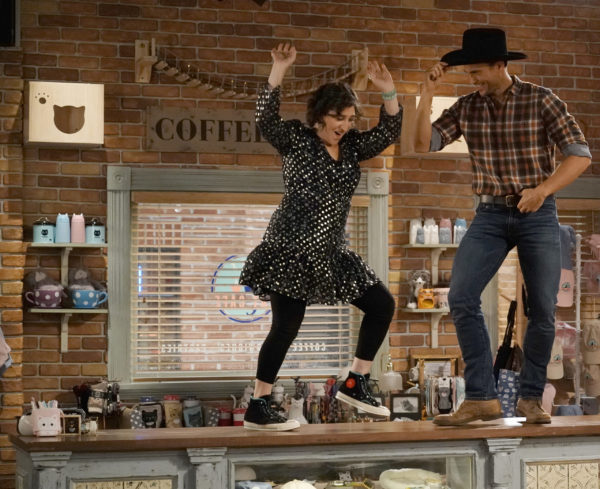 ICYMI: Call Me Kat Recap for All Nighter

The episode opens with Kat (Mayim Bialik) telling Alexa to remind her to call her mom at 6pm every day. Sheila (Swoozie Kurtz) gets sassy with her, so Kat has Alexa make a fart sound. Sheila admonishes her, then tells her a burial plot suddenly became available. Kat wonders how this happened and Shelia says that the police couldn’t comment on it. She adds that Kat should scoop it up because she doesn’t have a husband to share one with at this point.

Kat, Max (Cheyenne Jackson), Daniel (Lamorne Morris) and Randi (Kyla Pratt) are at the bar talking about pee streams and age. Daniel leaves to do work, kissing Randi goodbye. After he is gone, she complains about him, even though he is decent to her.

At the cafe, Randi says she is going clubbing with her cousin. Kat and Phil (Leslie Jordan) want to come, but she tells them they are too old. She mentions a mechanical bull ride, which makes Phil want to go even more because it is on his whistle list. Kat and Phil still want to go and beg Randi to let them tag along.

The trio enjoy drinks together when Kat brings up the grave. Randi teases her about being old when a guy asks her to dance. Kat reminds her she has a boyfriend and Randi teases her again about her age. She then enjoys drinks with Phil, who is picked up by a woman whose friends find him adorable. She jumps on his back and they go back to her group.

Kat is now alone, falling asleep. She tries to do some exercises to wake up when she crashes into an attractive man (Christopher Rivas). She apologies and has him pick something out of her bag. He takes her keys and they bond over going to the same college and how he was the school mascot. She said she auditioned for the role, but doesn’t say when. She wonders when she turned into her mother and recalls a conversation with Sheila about her age.

Phil goes on the mechanical bull with his new friend, who falls off. Meanwhile, Kat jumps on the bar to find him, but she ends up yelling at Randi for dirty dancing with the random dude.

At that moment, Man! I Feel Like A Woman comes on, so she and the bartender dance together. She is thrilled when people throw money at her.

Phil falls off the bull, says he is ready to party and also begins to dance.

In the Uber, Randi says they were at the wrong club. Kat says they both scared her because of their actions at the bar. As Randi defends herself, they pass the cemetery where Kat’s possible ‘permanent residence’ might be. They decide to check it out, leading to Phil and Kat falling in the grave and Randi making fun of them.

Kat asks Randi to get a vine to help them get out, causing her to be snarky. As she leaves, Kat and Phil enjoy whiskey and bone broth, discussing his list and bonding. They are both afraid to die and think about what they will miss after they are gone.

Randi comes back, upset about Daniel not texting her and with no vine. She says her cousin Birdie is at a diner with a hot older guy she wants her meet. She then uses her double bras to get them out.

At the diner, they all discover Max is the hot older guy with Birdie (Azur De) and that he posed for Playgirl. Kat asks him if this is what he does on weekends and he says age is nothing but a number and goes to sit with Birdie.

Randi asks if she is okay with this and that she will shut it down if she wants. Kat says she is fine and discovers that her mystery man from the bar is there and goes to chat with him. They agree to go out and exchange numbers. He also returns the keys she forgot she gave him.

Daniel comes in and talks to Randi about their relationship and they agree to move in together.

The episode ends with the trio back at the cafe, showing off their matching tattoos and saying goodbye while dancing to Shania Twain.