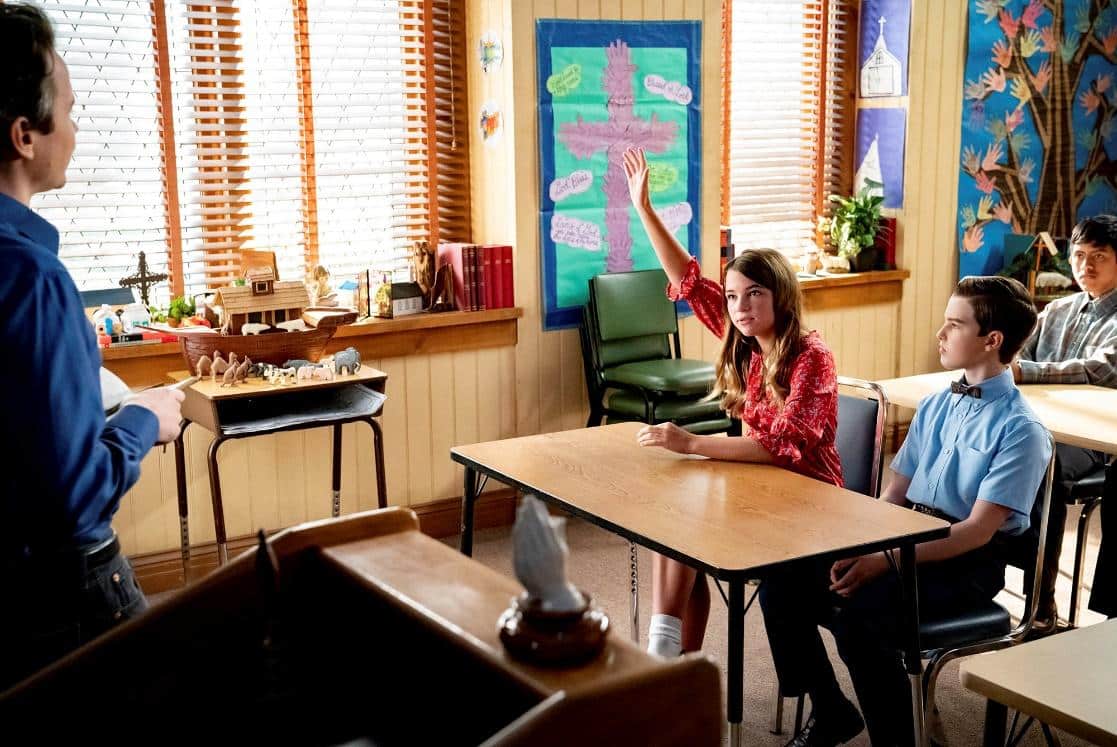 ICYMI: Young Sheldon Recap for Money Laundering and a Cascade of Hormones

This week’s Young Sheldon opens with Adult Sheldon (Jim Parsons) discussing Missy (Raegan Revord) discovering boys and how she has a thing for their new Pastor Rob (Dan Byrd). She asks a lot of questions about relationships, which leads to Billy (Wyatt McClure) and Pastor Rob revealing they are single and Sheldon (Iain Armitage) questioning everything.

Missy keeps asking questions, which leads to Pastor Rob telling Peg (Nancy Linehan Charles), Pastor Jeff (Matt Hobby) and Mary (Zoe Perry)that he thinks they should talk about sex (or S-E-X). Mary doesn’t think it is a good idea, but the pastors and Peg think it should be done, especially since Pastor Jeff has seen things on TV.

MeeMaw (Annie Potts) and Georgie (Montana Jordan) argue at the laundromat about him being assistant manager and what he should be paid. She wants more money, but she wants to give him half of his previous paycheck. He insists on getting a cut, which leads to another debate.

George and Mary discuss how Missy has been asking questions about sex. Mary then tries to give Missy and Sheldon ‘the talk,’ but Missy storms out and Sheldon gives biological facts.

Later on, Missy is in her room, listening to music. Sheldon comes to her window to talk to her and make sure she doesn’t run away. However, she gets mad and shuts the shade in his face.

Mary and Pastor Rob discuss the sex workshop for the kids. He wants her to do it, and she agrees, even though she finds it embarrassing.

MeeMaw and Georgie try to sell teddy bears in order to make money, but it ends up confusing customers.

Sheldon tells Dr. Sturgis about the sex talk fiasco with Missy. Dr. Sturgis tries to prove there is nothing to be embarrassed about when it comes to the topic, which leads to him getting fired.

As Mary and Pastor Rob plan their workshop, where they both admit they didn’t wait until marriage. They end up awkwardly laughing and leaving.

Georgie and MeeMaw continue to use stuffed animals to legally run the gambling business. They end up making a lot of money to the point where the box won’t close. At the end of the day, she wants to keep all the money, but he threatens her by saying he watched Scarface ten times.

She plans to watch it herself, which ruins his plan of getting the money.

Mary has a sex dream about Pastor Rob and wakes up in a panic. George can tell it was some dream because she is sweaty.

Pastor Jeff calls Mary and Pastor Rob to the office to tell them the sex talk is off because the parents are angry. This leads to Missy getting upset because she got uninvited to two birthday parties and lost her seat at the lunch table.

Officer Jake (Bill Fagerbakke) goes to see MeeMaw about her new business. He tells her that they can work together by her investing in local law enforcement. She knows he is shaking her down, so she pays him in quarters to get him to leave her alone.

Sheldon tries to help Missy feel better as he reflects on the past week. He ends up looking in his thesaurus to help find a new word for sex, landing on ‘coitus.’

The episode ends with Missy dreaming she marries Pastor Rob.