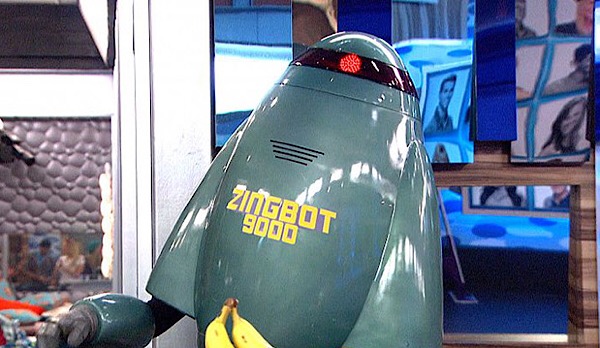 Tonight’s episode of CBS’s Big Brother will feature the POV competition and see if Christie or Nick will remain on their block or if someone will take one of their places. It is also the return of the Zingbot!

Christie is of course upset about being on the block. Several people in the house initially she was the prankster, but now they think it could be Nick.

Nick tells Christie that he hopes she wins the veto, but she knows he is full of it.

There are more pies in the face…..moving on….

Veto comp time! Holly, Christie, Nick, Jessica, Michie and Cliff are playing for the POV. Before we get to that, Christie tells Holly she plans to win in order to get herself off the block….even though she offered herself as a pawn. Holly is pretty much sick of her and hopes she is evicted.

The zingbot is in the house! I’m laughing so hard I am crying and I had to actually look up what was said because of how much I was laughing, so thanks, Gold Derby.

(The following are the quotes, courtesy of Gold Derby)

“Tommy! With all your constant singing and dancing this summer, you remind me of my favorite musical…’Little Shop of Attention Whores!’”

“Nicole! You say you’re afraid of birds, but you’ve been living with an old buzzard all season…named Holly! Zing!”

“Christie! Wow! You sure got loud on taco Tuesday. I don’t mean your fighting! I mean your chewing! Zing!”

He gives Nick a plain bowl and tells him it’s time for a new haircut. Zing!

“Nicole! It must be tough for you in the ‘Big Brother’ house with no friends, no boyfriend and no contact with the outside world. Actually, you must feel right at home! Zing!”

“There is one houseguest this summer who is very voluptuous. And if you don’t mind me saying, quite busty. Please to finally meet you…Cliff! Zing!”

“Jessica! With the game you’re playing this summer, fans are already planning a convention in your honor. They’re calling it…Snoozefest! Zing!”

Then he tells Michie, “We haven’t met yet! What should I call you? Jackson? Michie? Or pompous douche bag? Zing!”

Now we get to the veto competition, which consists of them freeing the zingbot, who has been arrested. They must get past security cameras by breaking them. Michie wins fairly easily and has the POV!

Of course, there is a lot of drama afterward. Word gets out that Nick is the prankster and he and Michie get into it a bit over the nominations and Michie winning POV.

The nominations stay as is, tune in tomorrow to see who is evicted.