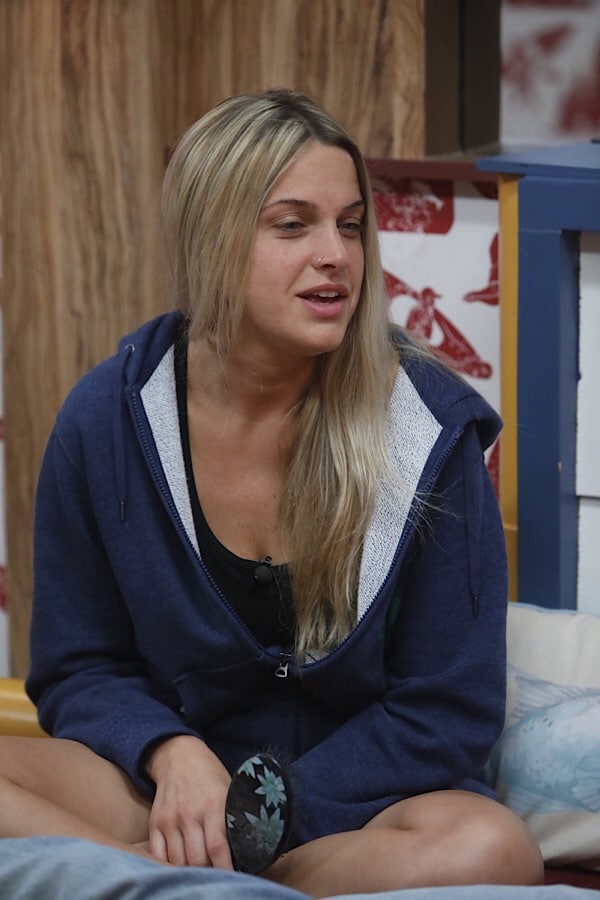 Tonight is yet another night of Big Brother on CBS. On the last episode, we saw Cliff and Kat get nominated for eviction, a new alliance formed and Ovi win a secret power.

Cliff is hurt by the nomination and Christie is in tears.

Kemi is trying to plan a showmance now that David is gone. She also seems to be bonding with Isabella. Apparently, she is talking smack about everyone as well.

Gr8ful is not happy about Isabella and Kemi bonding and plan to backdoor Kemi. Also…Christie plans to let the universe guide her as to who to target.

Kat and Jackson aka Michie seem to be getting closer, despite him not wanting a showmance. However, they are caught by Christie and Analyse, causing them wanting Kat gone even more.

Veto competition! Christie, Cliff, Kat, Nicole, Sam and Jack are competing, with season 20 winner Kaycee Clark hosting. They have to catch different types of food while being covered in slop. Sam ends up winning POV after earning 21 points.

Gr8ful is of course worried and corner Sam to see what his plan of action is at this point. He wants to save Cliff because he seems trustworthy.

Jack also seems to be taking over the game and wants to pick off Kemi, Jessica and Ovi one by one. This causes some friction with him and Christie.

Nick and Isabella want Kemi to stay. Nick shares this with Chrstie, who agrees. She just wanted to go with the rest of the house. She tells this to Jack, which causes more tension and her going crying to Tommy. At this point, she hopes Sam doesn’t use the POV.

Christie also warns Nicole about Jack. Nicole seems a bit clueless and to be enjoying the tea being spilled.

Christie also tells Sam to not use the POV to save Kemi. Sam had no clue this was a plan and has his heart set on saving Cliff. They discuss maybe putting up Ovi or Jack, but wonder if either one would be a good move.

Veto ceremony! Sam takes Cliff off the block. Ovi is the replacement nominee.