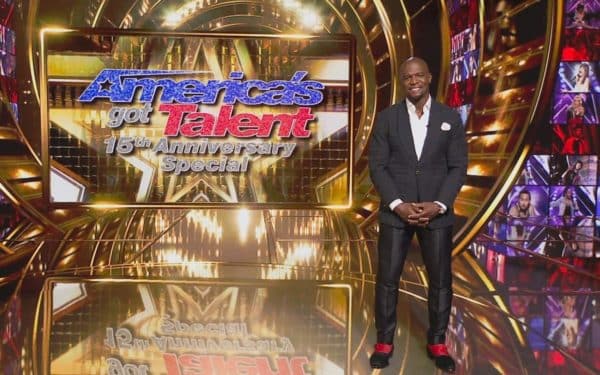 Tonight we are celebrating fifteen years of America’s Got Talent. We have had five hosts, twelve judges and over 200,000 acts grace the show and we are celebrating them all. We will also see the top fifteen acts throughout the show’s run.

After a quick recap of some series highlights, we get down to business.

14. Light Balance. They performed in 2017 and have over 119,000,000 YouTube views/ They told stories and performed dance movies via light art. I forgot how incredible they were. I hope they tour again once the pandemic is over so I can see them live.

11. Aaron Crow. He performed in 2018, doing a danger act. He has over 147,000,000 YouTube views. I do not recall this act, but it freaks me out to see him stick his eyes shut and cut a pineapple on Howie’s head using a sword. Did I mention his entire face was also covered? WOW.

10. Tyler Butler Figueroa. He is the violin player and cancer survivor from 2019’s season. He is such a strong, talented, incredible young man. I tear up whenever he performs and whenever I see Simon give him the Golden Buzzer. His YouTube count is over 149,000,000.

8. Men With Pans. They have over 231,000,000 YouTube views since being on the show in 2017. They danced wearing nothing but pans covering their private parts…..and yeah, it was funny as heck. Not surprising they did not make it through, but they made me smile.

7. Tape Face. He has over 242,000,000 YouTube views since his 2016 debut. He has his mouth covered in tape and does a singing act with two oven mitts…..and mimes. I have no idea what to make of this….but he is certainly unforgettable.

6. Grace VanderWaal Since 2016, she has earned over 260,000,000 YouTube views. Her singing and ukulele playing got her the win that year….and after watching her again, it was well deserved….as was the Golden Buzzer from Howie.

5. Angelica Hale. She has gotten over 296,000,000 YouTube views since debuting on the show in 2017. Her voice can top most powerhouse singers and she is certainly going places in the future. WOW. I forgot she got the Golden Buzzer.

4. Courtney Hadwin. She has over 310,000,000 YouTube views since 2018. It is amazing how she started off so nervous, but went into an incredible, exciting performance that earned her a Golden Buzzer from Howie.

3. Darci-Lynne. She has had 350,000,000 YouTube wins since winning the show in 2017. Her voice is incredible, but her ventriloquist talent makes it that much better. She really deserved her Golden Buzzer and the attention that followed since her win and being a runner up on AGT: The Champions.

2. Zurcaroh. They have gotten 423,000,000 YouTube views since season 13. I have no clue how I could have forgotten an act this good. I want to see them live once all this is over because they are that amazing. Tyra did the right thing by giving them the Golden Buzzer.