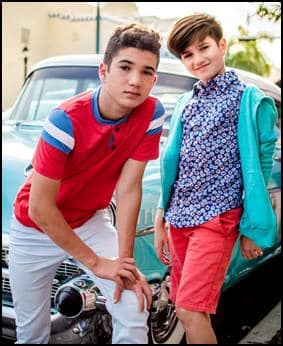 Tell me about yourself and career.
Bryan: I’m 12 years old, just started 7th grade and started acting when I was 8 years old after seeing my brother on set, and falling in love with craft services. Since then, I’ve really developed a passion for acting and enjoy the process of breaking down a script, figuring out who I want to be as that character and auditioning. When I’m not working, I also love drawing sketch art, I am a black belt in taekwondo and play flag football, golf and track and field.

Jonathan: Well, I’m a 14-year-old living it up in Miami. I love to create music and listen to music. I play many sports such as football, basketball, track, karate, and extreme anime watching. I started acting about 4 years ago, originally to pay for my karate tournaments, but I got hooked and have been acting ever since.

Tell me about Screwball.
Bryan: Screwball is a hilarious documentary about the steroid drug scandal that shook up baseball in the 2000s. Even though it seems like it’s about baseball, it’s really about adults acting like kids and makes you really think about it.

Jonathan: Screwball is a documentary about drugs in baseball, but it doesn’t stop there. It follows the life of the doctor played by my brother who started the Biogenesis operation and his $4000 scam on another dude. Oh, and everybody in it is a kid.

What is your role?
Bryan: I play the, as he says, “unlicensed physician”, Dr. Tony Bosch. Dr. T is the doctor who supplied the performance enhancing drugs to MLB baseball players, college and high school students.

Jonathan: I play the mafioso, jersey shore tanning salon owner, Pete Carbone aka The Bald Dude. I actually shaved my head for the role and I look so different in the film that my own grandma didn’t recognize me.

What attracted you to the project?
Bryan: Well my family is huge on baseball…my grandfather played in Cuba and he taught me how to play stickball, and my dad played all throughout his childhood here in Miami. I played a couple seasons as well, so to be part of a project about a subject my family is so passionate about is what made me want to audition for the role.

Jonathan: It’s a Miami story with very Miami people. The kind of stuff you won’t find anywhere else but Florida. My family is also a huge baseball fan. Basically, the whole project hit close to home and that was important to me.

What do you hope people like about it?
Bryan: I hope people find it as hilarious as I do, but also that they see some people who we consider our “heroes” don’t always do the best of things and don’t set a good example for kids like me, so it’s important to be careful about who we put on a pedestal.

Jonathan: The comedy. The way it took this serious problem and highlighted the ridiculousness of the whole situation.

What are some highlights from working with the cast?
Bryan: We had such a good time goofing off in between takes. I had four different wigs and facial hair for this film so I spent a lot of time with the hair and makeup crew and that was definitely my favorite time on set. Hair and makeup brought fake cockroaches to set one day and then me and my brother brought fake poop and fake rats and had a lot of fun pranking the cast and crew. The best was when Billy Corben, the director pranked me right back.

Jonathan: Definitely the pranks. We had so many setups and toys. Fake cockroaches, fake poop, buzzing toys – you know, exactly what you would expect when you do a film with an all kid cast.

What else are you working on?
Bryan: This spring, I worked on a world premiere play cowritten by Billy Corben (the director of Screwball) and Aurin Squire. Over the summer I finished up a great community theatre project about Miami and some of the things that affect us, like immigration, and transportation problems through this organization called PATH to Hip Hop, and now I’m working hard for episodic season!

Jonathan: Well, I have a project coming out next year that I hope to tell you more about then. Most recently, I was a Core Cast Member for an organization called PATH to Hip Hop over the summer. We created a hip hop theater production about Miami through our eyes where we spent time in different Miami neighborhoods, learned the history, and worked on creating a performing arts piece to reflect what we learned. It was a great experience and really helped me grow as an artist.

Tell me a fun fact about yourself.
Bryan: I can do a really good worm in the middle of a dance battle.

Jonathan: I’ve been writing lyrics which I keep in journals that I turn into my own songs. I don’t think the world is ready for that yet.

What are you watching on TV these days?
Bryan: I’m really into anime right now and am watching Fairytale and One Punch Man on Netflix, but I’m also my mom’s TV watching buddy and we have a long list of shows we watch. We are finishing up old shows like Gilmore Girls and Person of Interest. I also love Blue Bloods and game shows like The $100,000 Pyramid and Ellen’s Game of Games.

Jonathan: I’ve been binging shows on Netflix like The Office, The Get Down and Seven Deadly Sins.

Anything else you want to tell America?
Bryan: Screwball is available on Netflix right now, follow me at @thebmanbry on Instagram and let me know how you like it!