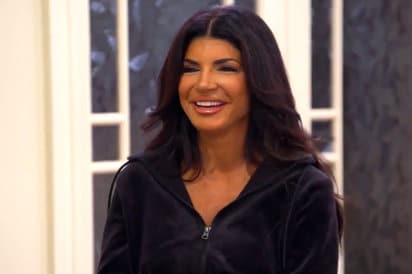 Tonight’s episode of The Real Housewives of New Jersey on Bravo continues from last week’s drama….and some new stuff. Here is a rundown of what happened with each housewife….and on the trip.

Melissa is preparing her store for new inventory. She is very excited about the things happening at Envy.

Later on, she is talks to Joey about how he is treating Delores. She thinks he needs to cool it with his attitude, while he wants his old wife back.

Jackie is planning her birthday party. It includes wine tasting and apple picking, which sounds like a blast.

As she fills Evan in on her plans, Delores calls to say she will meet them at the venue since she has a doctor’s appointment. However, Delores doesn’t have an appointment, she just doesn’t want to drive with the women after the way they treated her at Michelle’s party. Jackie tells her that is fine, but wonders if Delores is telling the truth.

Jennifer is redecorating her house when her mother calls. Josephine is very upset since Jennifer brought up the separation at the party. Jennifer tries to explain things to her mom, but no avail. She explains things to her dad, who doesn’t seem to understand what she is going through.

Teresa is having lunch with Milania when Joey arrives to help her move things in the house. She asks him why he brought up her new boyfriend and he says that he loves the fact that he treats her the way she deserves. Teresa agrees, but isn’t quite ready to go public because she is so guarded. Joey just loves that she is so happy.

Later on, she gets ready for a date with Louie. She talks to Milania about it, who says she is thrilled that she is so happy.

Margaret is preparing for her book cover shoot, which includes Marge Sr. The two of them have a blast together, joking and bantering back and forth. They both also have fun dressing up and getting into the theme of a caviar life on a tuna fish budget.

Delores and Frank prepare for Frankie Jr. And Gabby’s joint birthday party. They discuss how proud they are of the kids as they come home. There is a special sushi dinner for everyone and they all sit down to eat.

David joins them after delivering another baby. The discussion moves to Delores and David’s relationship and the party debacle. David doesn’t seem to care and Delores says he is there when it matters.

Jackie has a breakfast of coffee, eggs, fruit, bagels, croissants and lox for everyone. Melissa and Margaret are the first to arrive and the ladies immediately begin gossiping about Delores and Teresa. Spoiler alert: it is about their respective men.

The other ladies arrive and surprise Jackie with a beautiful pair of earrings for her birthday. She is so touched and puts them on right away.

As they get ready to go, Melissa gets a call that Joey is hurt. She rushes out to see what is wrong, but not before Jackie gives her a goodie bag.

The ladies leave and call Delores to see if she is on her way. She says yes and tells them to let Melissa know to take Joey to the hospital where David is working.

Teresa gushes about her boyfriend, but reiterates that she is taking it slow.

APPLES AND WINE AND FIGHTS, OH MY!

When they arrive and are excited to enjoy the day together. However, they begin to bicker over the Delores debacle and Joey’s behavior. Delores says she is upset that everyone took a poll about her relationship and they all need to mind their own business.

After the ladies pick enough apples to bake pies and fill their bellies, they do the wine tasting. As they enjoy their wine, Melissa texts them and says Joey has a kidney stone…..and David is taking care of him.

The topic switches to Margaret’s upcoming party. Margaret asks if Delores is bringing David, which causes another fight over the whole fiasco at the previous party. Delores says things changed, but she is still happy. She tells Teresa that things can change in a relationship and to go with it.