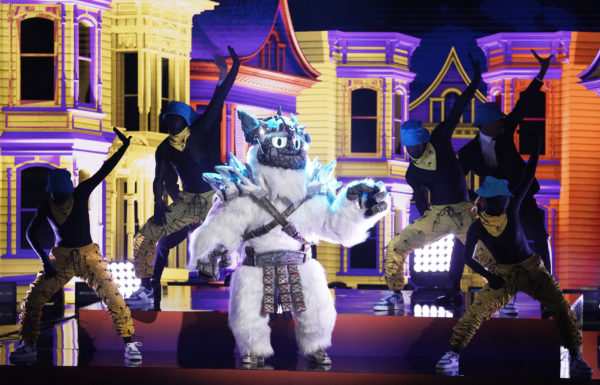 The Masked Singer Recap for The Spicy Six

Tonight is the Spicy Six on Fox’s The Masked Singer, where we will see the top six perform and one contestant leaving at the end of the night. Nick Cannon hosts, while Jenny McCarthy, Robin Thicke, Nicole Scherzinger and Dr. Ken Jeong judge. This Is Us star Chrissy Metz is also on hand as a guest judge.

Clues: bond with children, having purpose by being a father, pacifier

Song: It Takes Two by Rob Base and E-Z Rock.

Thoughts: He is so much fun and really gets into the dancing as much as the singing. It is the perfect way to begin the show.

The judges love him and this side of his personality.

The Men in Black Mind Reader: Corn on the cob.

Clues: Going to a theme park, having food stamps as a child, losing someone close ‘in the most tragic way.’

Thoughts: WOW, this was such a soulful, beautiful performance. If everyone is this good tonight, it is going to be a tough call to predict who goes home….and even sadder when said person is eliminated.

Clues: Birthmark in the shape of an apple on his head, dream girl, shaved head with fraternity, vampires, gold bars, numbers.

Song: Against All Odds by Phil Collins

Thoughts: I think he may have won the competition with this performance. He hit all the notes and put so much power and feeling into the performance. It was nothing short of amazing. The judges can tell how much he wants this and thinks he can go all the way.

Song: Do I Do by Stevie Wonder

Thoughts: This performance just made tonight that much more difficult to decide who should stay and who should go. She was incredible and really took this song and made it her own. The judges agree that she did a great job tonight.

Men In Black Clue: Mariah Carey….and beating one of her records was an honor.

Thoughts: Well, welcome to the finals, gents! There are only two tonight, but they really hit every note and literally brought tears to my eyes. Holy cow, this gave me chills from start to finish.

Thoughts: What a way to end the night. That was fun, exciting and as the kids say these days, LIT. I loved every moment of it. The judges think he is a front runner.

As an aside, tonight’s clues really threw me off. The only ones I have guesses for are Russian Dolls (Hanson) and Chameleon (Snoop Dogg). Other than that, I have no clue.

Robopine is none other than……TYRESE! He did the show for his kids and is thrilled to have been a part of this season.