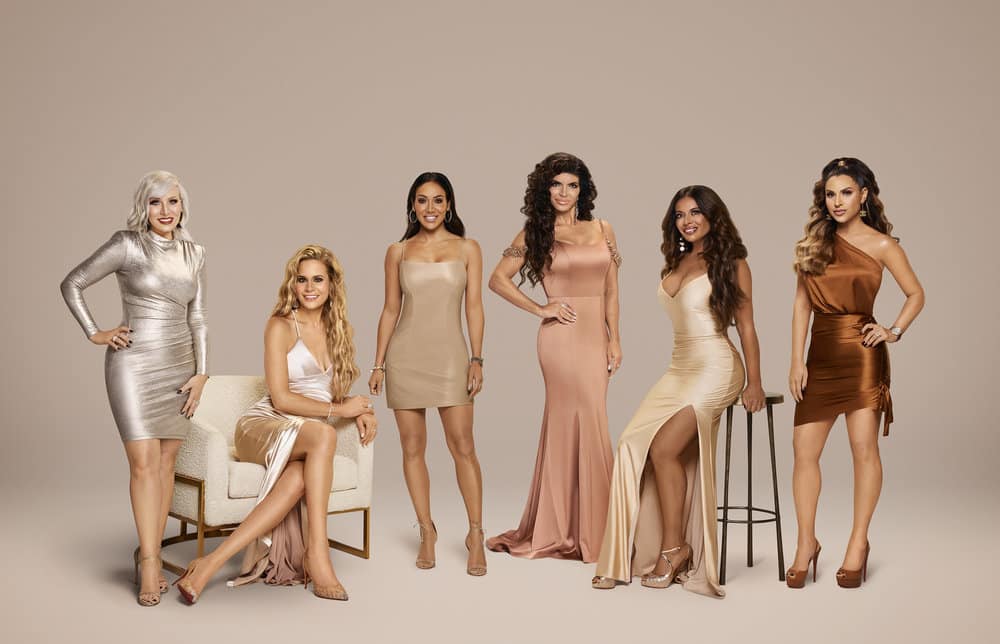 Tonight’s episode of The Real Housewives of New Jersey kicks off with Teresa Giudice screaming at the dinner table, telling people to EFF OFF. Joe Gorga goes to talk to her, but she screams at him to go away. He is frustrated with her attitude and walks away.

(No table flip, Teresa? Girl, you need to get back into that!)

Everyone else is screaming over rumors the guys have heard, causing Jackie Goldschnider and Margaret Josephs to fight and storm off. Melissa Gorga tries to get everyone to calm down, which leads to more tears, but people hugging it out.

(Scream, cry and hug. I can relate! #ItalianLife)

Teresa goes back outside to scream at Joe some more, leading to Melissa screaming at her as well. They both tell Teresa they always defend her and wonder why she is defending her ex husband. This causes more screaming and f-bombs being dropped.

(I should count how many f-bombs are dropped per episode and compare it to My Cousin Vinny.)

Joe makes it 1000% clear he hates Joe Giudice for the hell he put his family through and how he still be causing problems. Teresa tells him to calm down because Joe is now out of their lives.

(I don’t think Joe ever liked his brother-in-law. As much as he hates to admit it, I can bet a lot of it also boils down to a man hurting his sister.)

Joe, Melissa and Teresa hug it out, but Joe still wants Teresa to apologize to Jackie. However, she refuses to due to the jail crack she made.

People start to leave, saying that they will be meet up the next day. Jackie calls her husband Evan about the guy’s night and how Teresa is an animal. The two of them agree to stand united and hang up.

Meanwhile, Teresa keeps venting, but Delores Catania tells her to calm down and prove Jackie wrong.

The next morning, Melissa and Joe make everyone breakfast. Margaret, Jennifer Aydin and Frank eat and talk about night before. Joe admits he talked to Teresa earlier and told her to let things go because they are the only family they have. He reminds her that they need to prepare for the memorial.

(Food and family. Another Italian tradition I love!)

Teresa talks to her daughter Gabriella on the phone as she gets ready.

(What was the point of that conversation?)

When she is off the phone, she rants to Delores, who tells her to let things go. Delores is annoyed with the problems she and Joe Giudice are causing.

Jennifer’s husband shows up with food, along with Frank. As they eat, he is filled in about the night before. Delores says Teresa will apologize, but Teresa says that she will just tell Jackie to stay out of her face.

(Are we going to talk about ANYTHING else tonight?)

Jennifer tells her husband about the night before from her point of view. He tells her that boy’s night conversations should stay there. She says that she needs to set Margaret straight as they go to get ready.

(He is right, unless it is something completely life changing and terrible.)

Everyone gathers outside for some drinks and bonding time. Teresa tells Jackie they should drop everything and they agree to not bring up the husbands. However, Jackie says Teresa should talk things out with Evan. Teresa doesn’t want to, but agrees to do so anyway.

(Don’t mention my husband, but talk things out with him. Okayyyy….)

Melissa gives a tour of the house, saying how she and Joe upgraded from their first property. As they continue to talk about the night before, Evan arrives.

(Still with the night before. How long will this storyline last?)

Everyone says hello to him and Teresa takes the time to apologize. Jackie thinks it was weak, but accepts that getting anything from Teresa is a miracle. However, Joe is proud of Teresa for making an effort.

(I guess a weak apology is better than none?)

The gang goes into the water on boats and for once everyone seems to be getting along. However, it is short lived because the ladies begin fighting during lunch, causing the men to go to the other side of the patio. It gets even worse when word gets out that Margaret slept with her boss. She gets mad and screams at Jennifer for talking about it without knowing all the facts.

Margaret vents about it to Melissa, Jackie and the husbands, while Jennifer continues to talk trash about Margaret. Tune in next week to see what happens!

(Previews are intense! Are we going to see a Gorga divorce?)