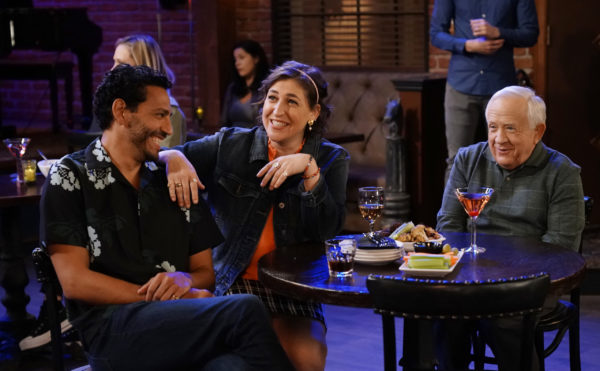 ICYMI: Call Me Kat Recap for Moving In

The episode opens with Kat (Mayim Bilaik) buying cat food at the pet store. She wants to use her twenty receipts to get a free bag, but the cashier Pete (Bob Clendenin) tells her that the promotion is over. However, he offers her a buy one get one free deal on snakes. This does not please Kat, who argues with him over the issue. He pretends to bathe in his tears and does not care about her anger. She decides to take the bag of cat food and run, despite the fact she is stealing and that security cameras are watching.

Later on, she shares the story with Oscar (Christopher Rivas), Max (Cheyenne Jackson), Phil (Leslie Jordan) and Carter (Julian Gant). She says she tossed the cat food into the wrong truck, sipped some random person’s coffee and when she finally did pull away, the perfect getaway song came on the radio. Carter guesses Getaway Car by Taylor Swift, which makes Oscar surprised. He asks if he is a Swiftie. Carter says yes but not to call it that.

Kat tells them it was Bad to the Bone, which Max thinks is a better song. Phil tells her the karma gods will get her, but Kat doesn’t believe him and argues over the fact that he tried to sell her snakes.

Carter says his son wants one, but he says no because his grades aren’t up. He says he tells him to stop playing video games and do his homework, but he argues that he wants to live with his mom. Carter then says that is when he listens to T. Swift to chill out.

Kat tells Carter Max can help his son, and Max agrees, saying that he was Teacher of the Year in Burma, even though he was the only teacher, but he probably still would have won.

Randi (Kyla Pratt) comes in, saying she needs to be out of her apartment, but Daniel is out of town. Carter and Phil say no, but Kat offers to help.

On moving day, Randi begins to freak out about all the pictures in Daniel’s place and finally admits she is scared to move in with him. She tells a story about a Single White Female roommate, when Kat gets a text from Oscar. Randi convinces her to send a sexy selfie and looks away. As Kat sends the picture and as she leans back, knocks over some things. When she goes to pick them up, she discovers a wedding picture of Daniel and a mystery woman.

Kat tells Sheila (Swoosie Kurtz) about it and shows her the picture, all while cuddling Buttons, her emotional support cat. She convinces Shelia to do a background check and is surprised she is into this kind of work because she never blends into anything.

Shelia wonders if Randi knows Daniel was married before, but Kat says she doubts it based on things Randi has said. She wonders if she should continue the investigation, but Sheila assures her she should because Randi can end up a sister wife. Kat ends up giving her his information ans she continues to cuddle with the cat.

Carter and Max prepare for the tutoring session, with Max showing off his rewards. It has a button that gives out compliments, which Carter thinks will be good for the bedroom.

At work, Kat fills Phil in on the Randi situation and asks what she should do. He gives her some advice but she isn’t sure if she should say anything. When Randi gets out of the bathroom, they end up telling her, making her upset and accusing Kat of snooping. The ladies end up arguing as Randi runs off. Phil says it is a karmic bitchslap. Through it all, Wyatt (Tim Bagley) keeps interrupting and making creepy comments.

Kat goes to the pet store to give back the cat food and get her good karma back. However, the bag breaks and spills it over the floor.

Later that day, Carter’s son CJ(Christopher Farrar) is on his phone when Max walks in to tutor him. He tries to get him off the phone, when Carter walks in, wondering how he got it in the first place. It turns out he replaced it in the sock drawer with a deck of cards.

Max makes CJ a deal to go fishing on his island if he does his homework and gets off the phone. As they go through the work, Max sees that it is a mess and filled with chocolate.

Kat fills Oscar in on the drama with Randi, saying she said she needs some space. As they talk it out, they also exchange secrets, which include Oscar admitting to stealing from a mall fountain. She says she took a sexy picture of herself for him but never sent it. He urges her to send it, but as she does she gets a text from Max and accidentally sends it to him. CJ sees it and gives Kat the eye when she runs in, screaming at Max not to check his phone.

Later on, Kat and Max talk it out and he says she looked great, but knows it wasn’t meant for him. However, Phil makes fun of her for it because it was so tame.

Max and Kat talk about the Randi debacle and she decides to fix it once and for all.

Phil and Kat go to Randi’s place, but she is not home. They try sneaking through the window, when Randi calls, saying she is at Kat’s place. The girls meet up Kat’s and Randi tells her about Daniel’s marriage. It turns out it was his college girlfriend and they annulled it after a month. She says she is not upset over that, but more upset that he told her she was overreacting. She isn’t sure what to do, so Kat offers to have her stay there for the time being. The two make up over a glass of wine.

The episode ends with Randi telling Pete off and Kat getting her cat food, whilst knocking over toys. Bad to the Bone plays as they all say goodbye.