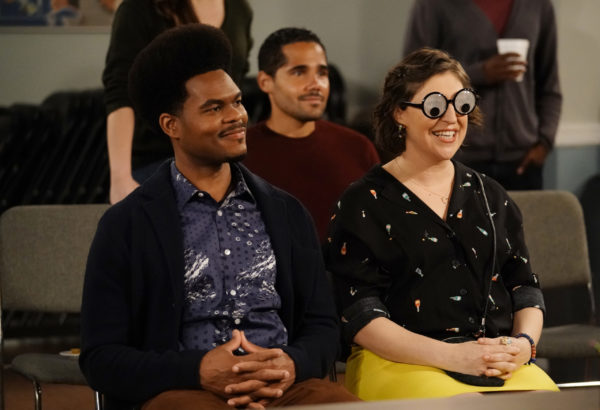 The episode opens with Kat (Mayim Bialik) in a business council meeting with Carter Julian Gant). Marlene, the woman in charge, says that Wayne’s store is no longer in business, so they need a new member of the business council. Kat is sad because she loves the store and puts on a pair of joke glasses.

Carter nominates Kat to be the newest member of the council and she gets it! Later on, she talks about it with Randi Kyla Pratt), Phil (Leslie Jordan) and Max (Cheyenne Jackson). She also promises Carter to vote for 1-A.

Sheila (Swoosie Kurtz) comes in, saying that she is moving in with her boyfriend. She says she never lived with a man outside of marriage, but Phil assures her it if fine. Sheila gives Kat her grandma’s pearls and shows off her old tap shoes. She then asks Max to help her move, promising to give him some stuff.

Randi and Phil are making pastries when Randi says that Daniel isn’t getting back to her about her modern art project. Phil suggests Max, but Randi says it has to be more modern than a hot bartender.

At the next meeting, there is a vote about whether or not Carter’s bar should stay open later. As she listens to both sides, Kat is torn on what to do. She wants to support Carter, but also agrees with the counter arguments. She votes nay, upsetting Carter.

Later on, Max and Kat move things when he sees an old jukebox. He wants it, but she wants to give it to Carter for the bar. Sheila gives him a jacket that belonged to her father, saying he can use it when he gets a real job.

At the cafe, Randi takes pictures of Phil in pearls while discussing her problems with the class. He tells her to take an inspiration bath to get to where she needs to be.

Kat dances for Carter in front of the bar, but he is still mad at her. However, he agrees to talk in order to get her to stop dancing.

Phil and Randi soak their feet, hoping that she will get inspiration. She finally decides to do a nude picture of him.

Kat goes to get to get the jukebox as it is being towed away. It falls off the truck, causing it to break. She tells Randi that it feels like the day the music died because not only is the jukebox broken, but she is not welcome at the bar. She thinks that she was really bonding with Carter, especially since he named a sandwich after her. However, Randi says he only does that when he wants something. She says he tried it with her and she shot that down quickly.

Phil comes out ready for his photoshoot. Kat wonders why he is naked and what happens when she is not there.

Kat tries to apologize to Carter Love, Actually style, but it only leads to more fighting. She goes to talk to Phil about it and says maybe Carter is in her life for a season, but she wants to work things out.

At that moment, Randi walks in with the pictures of Phil. It gives Kat inspiration to help Carter. She runs to the bar to tell him and Max to open up the back patio. They love the idea, leading to Kat and Carter making up.

Later on, Randi shows off the pictures in the patio, with Phil saying he is going to cover the naughty bits with tinsel and use them as Christmas cards.

Sheila wonders what happened to the jukebox. Kat tells her that she and Carter went halfsies to fix it.

The episode ends with everyone saying goodbye and listening to Dancing in the Street.