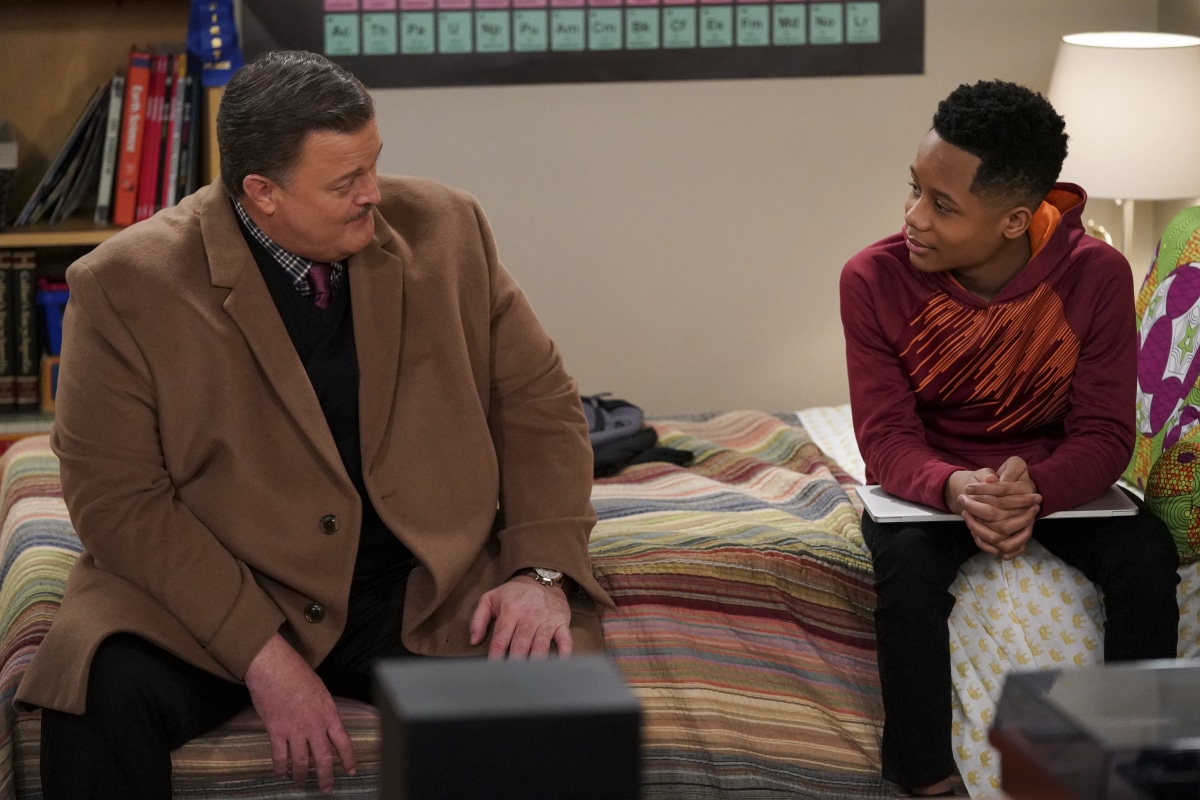 The episode opens with Tayo (Dayo Ade) and Bob (Billy Gardell) going to Abishola’s (Folake Olowofoyeku) apartment, arguing over who should go in first. Abishola tells them both to come in. The two debate over taking the stairs vs. The elevator when Dele (Travis Wolfe, Jr) comes in to watch a soccer game. Bob gets snarky when Abishola calls him into the kitchen. Tayo says he belongs in the kitchen and Bob says that is where the knives are.

Abishola says that a boy needs his father, which is why Tayo is there. Bob says he wishes he would have known, causing them to get into a bit of an argument.

At work the next day, Kemi (Gina Yashere) says that the potato salad should get a Michelin star. Gloria (Vernee Watson) argues that hospital cafeterias don’t get them, but Kemi insists that anywhere that serves food should qualify, including the Turkish prison she was once at. Gloria wonders why she was there, but Kemi refuses to disclose why she was there.

Abishola gets a text from Tayo, saying that he will pick Dele up from school. This leads to Kemi saying he is now going after the cub and the women discussing men and how to handle them in certain situations.

Dele is leading his dance team when Tayo comes to pick him up. He is embarrassed, so he sends everyone home early. Tayo goes on to lecture him on the silliness of dancing and to focus on something else. Dele says he is still going to be a doctor, but Tayo is still not happy, blaming Abishola for everything.

Goodwin (Bayo Akinfemi), Kofo (Anthony Okungbowa) and Bob teach Bob about soccer, however, as they try to explain it, Bob cannot grasp what is happening. He ends up kicking them out.

Abishola comes home, where Olu (Shola Adewsi) and Tunde (Barry Shabaka Henley) tell her Dele is moping. They even yelled at him abd made him clean, but no avail. Abishola goes to talk to Dele, who tells him he is going to give up dance. Abishola is trying to figure out if it is really wants, or if he finds it ridiculous. She realizes this is Tayo’s influence and tries to help, but isn’t sure how to handle things.

Bob is cooking chili with Doug (Matt Jones), who just wants to eat. Bob says the flavor needs to build when Christina (Maribeth Monroe) walks in, ready to eat. She says she is intermittent fasting, only eating sunup to sundown. Dottie (Christine Ebersole) says she wants to do that with drinking, but Bob says that its intermittent alcoholism.

Abishola calls and says she needs help dealing with Dele. She wants him to come over to talk to him, so he goes on his way. As he leaves, his family complains about the chili.

When Bob arrives, Abishola brings him into Dele’s room to talk. Dele insists he is fine, but Abishola knows he is lying. She allows the guys to talk, but not before she gathers his laundry, saying he doesn’t have to be dirty.

Dele insists he is fine at first, but then admits he doesn’t want to give up dance. Bob says at the end of the day it is his life, so Dele decides not to give up. They continue to bond by saying they hate soccer.

Abishola meets Tayo at the restaurant, saying that while she disagrees over the dancing, she has to let him live his life. Tayo thinks that this happened because they are in America, however, Abishola reminds him that he insisted they go there and Dele is thriving.

Later on, she is talking to Dele’s grandma, when she finds out that Tayo wants Dele to go to Nigeria. Abishola is shocked because she was not notified abut this, so she and Bob talk to Dele. He tells them he wants to go in the summer so he can get to know his dad and family better. Abishola agrees, but breaks down in tears when she and Bob leave the room.

The episode ends with Kofo and Goodwin watching the game and getting excited over seeing a Nigerian player.