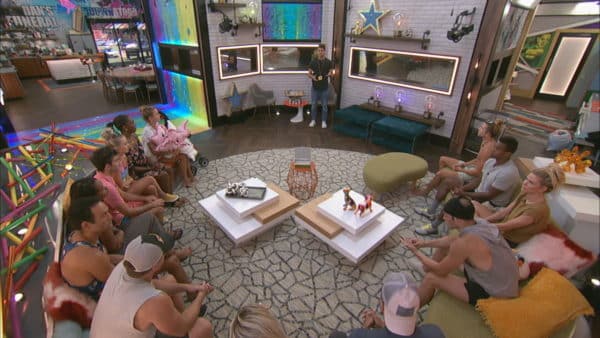 Season 22 of BIG BROTHER ALL-STARS follows a group of people living together in a house outfitted with 94 HD cameras and 113 microphones, recording their every move 24 hours a day. Each week, someone will be voted out of the house, with the last remaining Houseguest receiving the grand prize of $500,000. Airdate: August 26, 2020 (8:00-9:00PM, ET/PT) on the CBS Television Network Pictured: Cast Photo: Best Possible Screen Grab/CBS 2020 CBS Broadcasting, Inc. All Rights Reserved

Tonight is the third POV competition on CBS’s Big Brother All Stars. Janelle and Kaysar are up for eviction, but one of them can be saved if someone takes them off the block.

After a recap from Sunday’s episode, we get to what is happening in the house post-nomination ceremony. Janelle may be upset about this turn of events, but she won’t let anyone else know.

Bayleigh agrees to play POV if Janelle has the option to choose someone, but makes no promises. Janelle says she might choose Nicole due to her gameplay.

Nicole and Dani talk about final four, with Dani planting seeds of doubt in her mind, making her think the worst of some of the players. It is all part of her gameplay because she thinks the third time is the charm for her to win. She even considers a final two deal with Nicole since she is always crying.

After a weird bathroom bonding moment with Kaysar, Janelle and Ian, we get to the POV competition. Tyler, Janelle, Kaysar, Cody, Bayleigh and Memphis. Bayleigh tells Dani she won’t change the nominations, while Kaysar and Janelle vow to keep fighting.

The competition has them moving puzzle pieces around to complete different colored cupcakes in different rounds.

Round 1 is won by Tyler, Cody and Memphis, eliminating Kaysar, Bayleigh and Janelle.

Round 2 is won by Tyler and Cody

Dani, Christmas and Nicole think Memphis threw the competition, as do Enzo, Cody and Tyler. The guys think they should backdoor Memphis.

Janelle and Kaysar feel like everything is hopeless, but Janelle still throws one last appeal to Tyler, promsing to vote with him for the next few weeks.

Christmas has to take care of a star baby as her plus one punishment, which is similar to the Baby Think It Over they had in my home economics classes.

Cody decides to keep the nominations as is, meaning either Kaysar or Janelle will go home. Stay tuned.