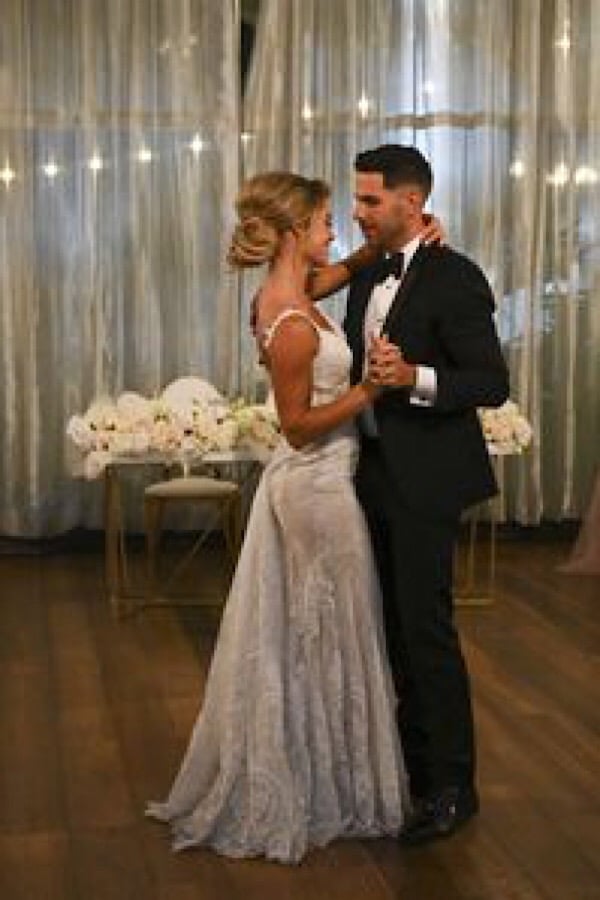 Tonight’s episode of ABC’s Bachelor in Paradise begins where we left off after the rose ceremony. Dean tells Caelynn that despite the fact that he gave her a rose, he doesn’t see things working out and leaves. She is upset and can’t stop crying. On her birthday, no less! Couldn’t he just wait until the next day?

He says she deserves someone better, which she thinks is a cop out, but the other say he needs to find himself first.

John Paul Jones is confused over his own feelings and is jealous of seeing Tayshia with Derek. He has this is so hard and opens up to Blake.

Tayshia finds a gift for them all. It is an invitation to Krystal and Chris’s wedding. They are excited to be going. Ashley and Jared, Ben Higgins, Bibiana, Becca and Garrett and a bunch of other alumni are there as well.

Angela is a bridesmaid, which is awkward for Clay, who used to date her.

Caelynn is upset until Connor walks in.

John Paul Jones is still mooning over Tayshia and upset over the fact that she is with Derek.

The wedding is beautiful and romantic. Anyone else crying? This song Prayed For You is beautiful as well. Chris Harrison gives a sweet, funny ceremony.

The reception is everyone mingling and talk about what is happening in life and in Paradise. It is all going well until John Paul Jones decides to have a meltdown and confront Derek. At the wedding. In front of Chris and Krystal’s families. Inappropriate is an understatement. I don’t know what Derek’s podcast has to do with anything, but ok.

Derek for his part tries to calm him down, but no avail. Everyone is shocked over this. Can’t they take this outside?

Chris calls the Paradise crew in order to thank them for coming and give them hope for their love story. Several of them are invited to party, which is kind of odd, but ok. Those not invited feel a bit slighted and Nicole is upset that Clay will be with Angela.

Those not going drink with Wells.

Blake is given a hard time by people at the wedding, and again, inappropriate.

Connor and Caelynn hit it off and make out.

Clay and Angela talk and let out their feelings and hurt.

Connor goes to Paradise and talks to Caelynn and Kristina before taking Caelynn out on a date. Everyone is happy for her….except for Kristina. She still hopes they can make a connection.

Their date is making art with their bodies….which consists of them making out…a lot. They also enjoy food, drinks and conversation.

Tayshia talks to Nicole about the fact that Angela and Clay spent time together. Tayshia thinks Clay might still have feelings for Angela and Nicole confronts him. He admits they talked and that he cares about her. He’s right, when you love someone you can’t turn the feelings off.

He also says he told Angela about seeing her (Nicole). Guess who pops into Paradise next? ANGELA!

Tune in next week to see what happens.