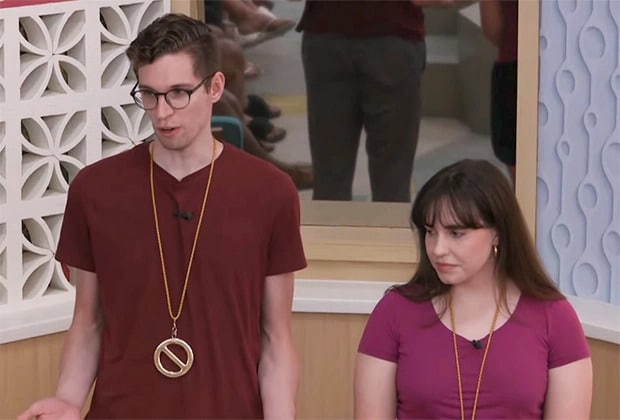 Tonight’s episode of Big Brother 24 on CBs opens with the veto meeting. Michael and Brittany are down, Ameerah and Terrance are up. Turner uses the excuse that he didn’t talk game with them…..and also because he thinks Taylor has been though enough. He also says he shouldn’t have to tell everyone the behavior toward Taylor is not okay, yet here we are.

In his DR, he says the bullying of Taylor stops today. She is touched by this turn of events.

Ameerah is angry and wonders who told him to put her on the block. Terrance is also upset with this blindside.

The rest of the house is stunned with Turner’s choice and wonder why he made such a decision.

Monte plays dumb with Ameerah while pretending to be on her side. He says he has no idea why or how Taylor didn’t go on the block….even though he knows full well what happened.

The Leftovers and Terrance are hanging out when Ameerah comes in, wondering what is going on. She reports back to Daniel and Nicole. She says they weren’t talking game, but wonders what they were doing.

Nicole talks to Terrance, thinking he is going home. She admits she was a cop. Turner comes in during the conversation and Nicole leaves, saying she is sad.

After she is gone, Turner tells Terrance that he is going to be safe.

Ameerah continues to think she is safe. She and Nicole talk and have a just in case plan in place if Ameerah ends up going after all.

In a vote of 7-4, Ameerah is evicted from the Big Brother Household. Those who voted for Terrance and Ameerah are all in shock….everyone else is….not.

Ameerah thinks Daniel, Nicole and Michael could have been behind her eviction. She is shocked, but understands she was the biggest threat. Julie lets her know about The Leftovers alliance….and Ameerah is gobsmacked.

After Ameerah says goodbye, Terrance is given the option to join a new besties group. If his bestie group wins HOH he is safe, if they are in the veto comp, he will play and if they are on the block, he will go up as well. This will happen each week as people are eliminated.

Terrance is now with Joseph and Monte.

HOH comp! They need to find a red invitation in a sea of envelopes. The top eight who find said envelopes will move to the next round.

Jasmine, Terrance and Brittany get the first three….and we will find out who else got them on Sunday, when we also find out who won HOH. Stay tuned!