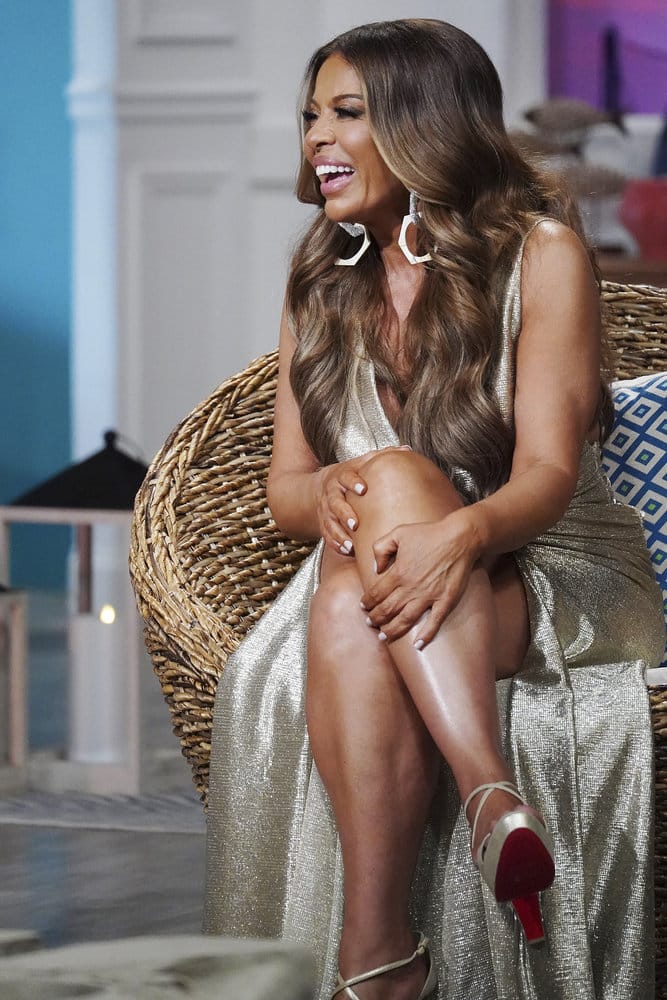 The Real Housewives of New Jersey Reunion Part 1 opens with the ladies back on the ladies looking back at being moms during the pandemic.

They also look back on some of their favorite mom moments, including Melissa having the sex talk with Antonia, Frankie getting a job with Teresa’s boyfriend and Margaret’s ups and downs with her kids.

Jennifer is called out on her cushy lifestyle and bragging about her husband’s job. Teresa says she is proud, so why not brag? She makes a comment about plumbers, which upsets Margaret.

Jennifer and Margaret bicker about how Jennifer allegedly brags about her life. The topic then switches to Jennifer’s relationship to her mom, which leads to the women attacking her for throwing her mom under the bus. Jennifer is ANGRY over this and attacks Melissa by accusing her of using Teresa to get on the show.

Jackie’s accusation of Gia doing coke in the bathroom comes up, but Andy tells her and Teresa they are talking about Jennifer now.

Andy asks Jennifer if her dad is abusive toward her mom, but she says he is not. She tries to explain things about their relationship and how her mom tries to turn the kids against his dad, but she continues to get attacked.

Melissa and Jennifer continue to fight….and drag Margaret and Teresa into the mix.

Delores is called out for convincing Melissa to do a cheating prank. She says she didn’t put two and two together and regrets it.

Joey comes out to talk about his relationship with Melissa. He says Melissa ‘slowly cut his balls out’ and they both admit they are both jealous people who cannot go out without each other.

This leads to the group fighting over fame, jealousy and who should be doing what.

The topic switches to Joey being chauvinistic and how he is a hypocrite for not wanting Melissa to talk to Antonia about the birds and the bees. He owns it, saying it is a hard topic to deal with since it is his daughter.

Teresa then talks about losing her dad and how they are coming up to the one year anniversary of his death. She cries and says that she talks to both of her parents all the time, adding that she has no doubt they sent her Louis.

We then see flashbacks of how much the Gorgas hated Teresa’s ex husband. Joey says he held his anger at Joe in for a long time, especially because he swears he is the reason their mother died.

Teresa says she was upset because they brought things up on national TV, which leads to a clip of Gia saying she indeed felt disrespected.

Joey doubles down on his behavior, still thinking that he did nothing wrong.

Andy says he was given information on how Melissa and Joey never visited his parents, stole money and got into other questionable activities. Teresa says a lot of it was false, but she won’t throw him under the bus for things that did happen.

However, it does cause an argument over things that Joe did and how Joey picked Kathy over her during that fateful Christmas Eve.

Joey says he, Melissa and Teresa are now okay.

The conversation changes to hair and how Margaret loves her pigtails, but also likes experimenting with her hair.

Jennifer and Margaret begin fighting over their husbands and who is submissive in Margaret’s marriage. This leads to a flashback of the ladies fighting throughout the season.

Margaret also talks about how the MeToo moment changed her perspective on sleeping with her boss, which leads to her fighting with Jennifer yet again. The other ladies get involved and Jennifer says that Margaret started the rumor about Evan.

However, we have to find out next week what happens, and how Teresa really got involved. Stay tuned.