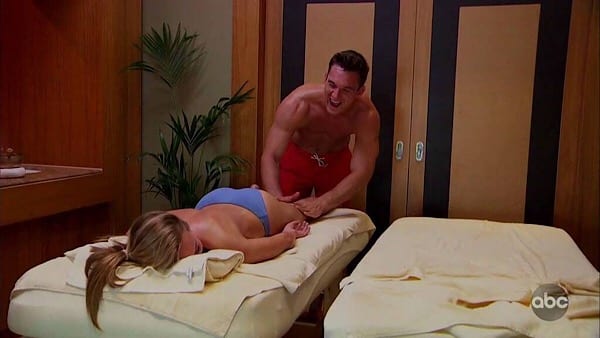 Tonight is the Fantasy Suite episode of The Bachelorette on ABC. Luke, Jed, Tyler and Peter will have a chance to spend time with Hannah away from the cameras in Greece.

Peter: They are on a boat where they make out, reenact the famous Titanic scene and re given some extra privacy on the boat by some random dude.

They also have dinner and enjoy time in the Fantasy Suite, which happens to be in a windmill….so is HE the guy she f**ked in the windmill? Hmmmm….

The next morning, he calls it the best night of his life and she says it was very nice.

Tyler: They get massages and make out. While they have a physical connection, they decide not to have sex in the Fantasy Suite because she doesn’t feel ready and wants to see what else they have in their relationship. He is a gentleman and agrees.

However, they enjoy spending the night together just kissing and holding each other. She feels very respected by him.

Jed: They dance and then talk to some locals. Well, she does, he seems bored and annoyed. This is due to the drama from the last rose ceremony. He talks to her about it and won’t shut up about it, even during dinner. she even walks away for a bit and he follows her to talk some more. It is almost too embarrassing to watch.

He does get a Fantasy Suite card and they go at it right away.

Luke: They are on a helicopter and she says she feels different around him. They also tour the city and make out. It actually seems like the most fun date of the bunch.

He sees a future with her. she feels like things are different with him than with the other guys.

The dinner we have all been waiting for…he seems honored to be on the date and wants to get closer. They toast to the day and then talk about being spiritual…which leads to him talking about sex. He is abstaining and wants to make sure they are on the same page with their morals. He doesn’t want her sleeping around and says if she is sleeping with the other guys he is out. She says she had sex with two men in her life and with men she thought she was going to marry. She is very offended by his words and says his pride is just as much of a sin as premarital sex. She feels he is judging her and he is very badly explaining that it bothers him that she wants to sleep with the other guys. She says he broke her heart, she broke her own heart and ignored red flags during their entire relationship. She really goes off on him and says his attitude is a big F.U. to her.

She tells him off and sends him home whilst giving him the finger. Glad to know she has had sex and Jesus loves her and she did it in a windmill….and a second time. He tries to argue with her while leaving, making her angrier.

More intense drama next week with his return…..stay tuned.