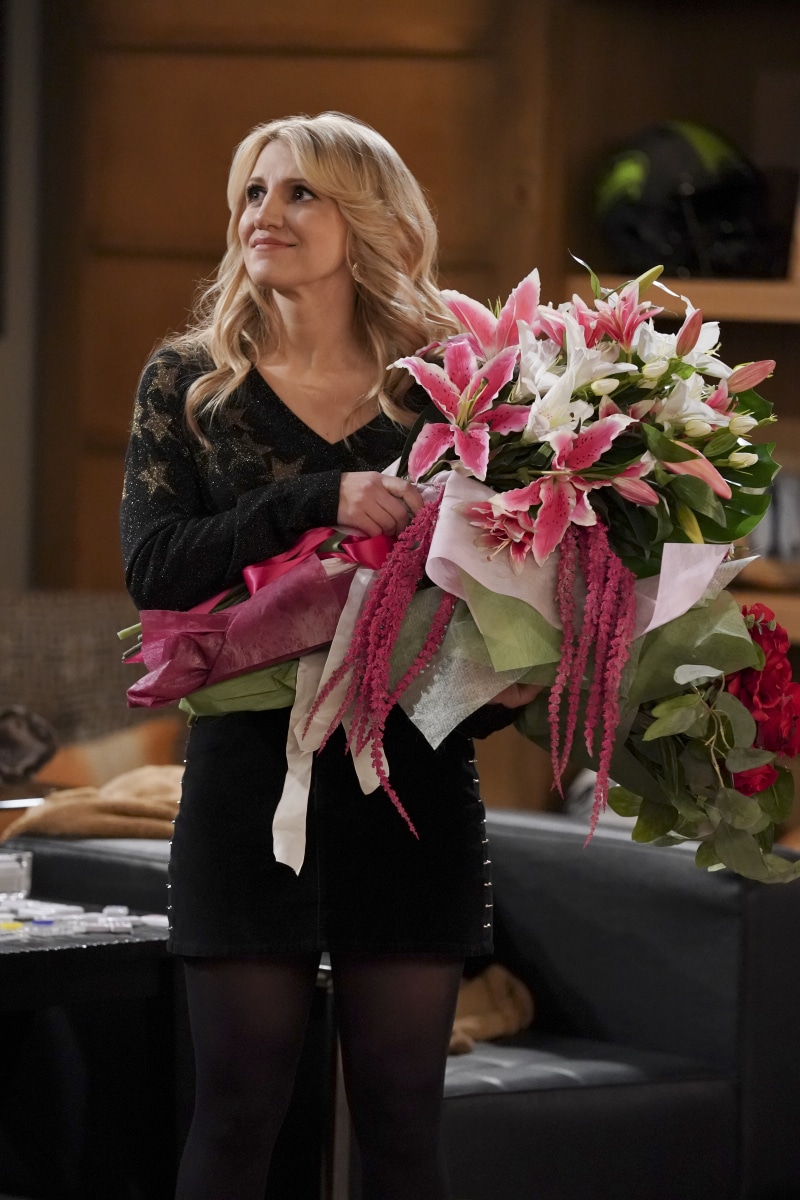 The episode (B Positive: Inflammatory Response) opens with Gina (Annaleigh Ashford) telling Norma (Linda Lavin) that the movie is about to begin. She says her room feels like the time she and her friends hotboxed a sauna. Norma says kids make drugs so complicated and should light one up and enjoy the ride.

Gideon (Darryl Stephens) sets Drew (Thomas Middleditch) up for his dialysis, so he pretends to be a robot. Gideon is not amused, so he stops. Eli (Terrence Terrell) invites Drew to a cigar night party, but to keep it on the DL, so no one gets hurt. He also tells him that he should keep Robot Drew at home.

Jerry (David Anthony Higgins) and Samantha (Briga Heelan) walk in, debating on how well they would do if they did the Amazing Race together. Samantha says that she would kill him before they got out of the first country. She notices there is some secrecy going on, so she gets Drew to admit he has plans with Eli.

Drew comes home to see Norma cooking. He asks Gina about it and why there is an aronist in the house in front of an open flame. He tells her no more strays after this when the doorbell rings. It is Eli, coming to pick him up. As Drew goes to change, Eli and Gina flirt a bit.

Drew comes down wearing a chain. Eli and Gina tell him to take it off, so he tells Gina to put it in Maddie’s jewelry box.

The men bond at the lounge over a woman Eli hooks up with, their lives and jazz. Eli admits he wants the family life, but never knows if women like him or his fame.

At the house, Gina and Norma have their own bonding session over baking. Norma is upset over the fact that she has to be in the home in the first place.

Eli and Drew come home, with Gina being impressed with his swagger. Gina tells the guys Norma is making her famous peach cobbler. Eli makes her feel young as they go outside to enjoy cigars, wine and a fire.

They all begin to bond until Drew goes inside, only to see the cobbler is burning. Norma goes inside as well, leading Gina and Eli to continue flirting and showing off their moves. They end up kissing.

At the dialysis session, Eli and Drew talk about their night. Drew asks if Eli wants to see a jazz show Saturday, but he says he has plans with Gina. This causes Drew to be surprised and everyone wondering if he is jealous.

Drew comes home and gets mad at Gina for going out with Eli. They end up fighting with Drew storming off. Norma thinks he is jealous.

Later on, Gina goes to Eli’s for dinner and he surprises her with several bouquets of flowers. She wonders if he does this for every girl, but he says she is not every girl. They begin kissing, but she freaks out because she is worried about Drew and messing up his friendship. She ends up going home so they don’t hurt him.

Drew is home when the someone knocks on the door. It is a police officer with Norma, who was driving his car with no license and got lost. He pretends to be her son and lets her in. She talks to him about how she misses her independence and how her daughter put her in a home. She knows it is probably for the best because she is losing herself a little at a time. He says she seems pretty sharp to her and she jokingly calls him Derek.

Drew says that she can visit whenever she wants to have her own Italian villa. She says with enough Chianti she can make it work.

The episode ends with Gina and Eli back together.