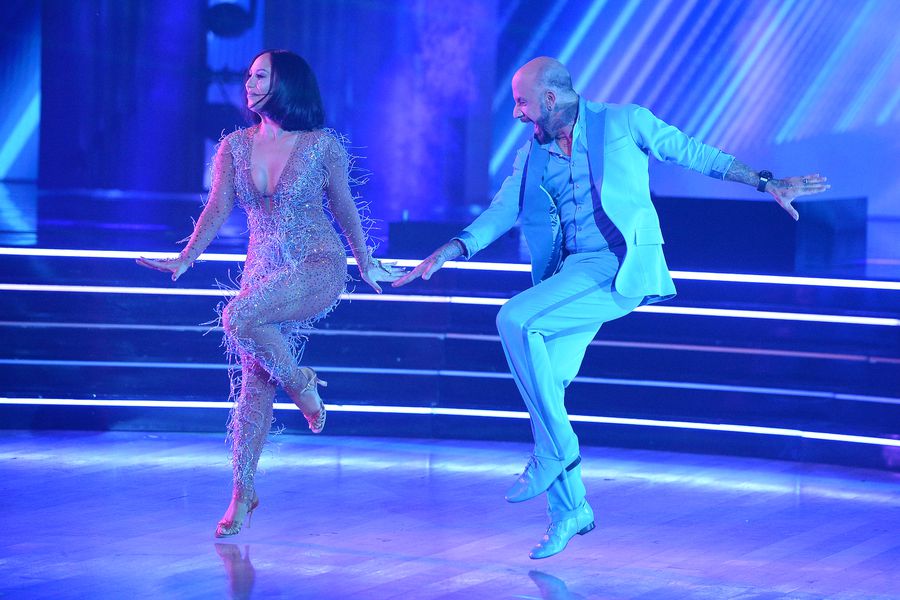 Tonight is the premiere episode of ABC’s Dancing With the Stars….season 29! Tyra Banks is the new host and Derek Hough is covering forn Len Goodman as a judge. Carrie Ann Inaba and Bruno Tonioli are also judging.

The judges are sitting six feet apart due to the social distancing. Derek talks about how much it means to him to be back.

Bruno is a silver fox now!

Len might be back sooner than we think….maybe via Zoom?

Song: Blinding Lights by The Weeknd

Sammi: Those strobe lights are making me dizzy. However, the dancing is unbelievable. I know he spent a lot of time dancing while in BSB, but this is on a whole new level. However, it seemed a bit short and I would have loved to see more jivey-ness.

Derek: He shot right out of the cannon, but wants more jive.

Bruno: He enjoyed it, but wanted more polish.

Carrie Ann: She also liked it, but wants it bigger.

Claim to Fame: All My Children, Days of Our Lives, Selling Sunset.

Song: Raise Your Glass by Pink

Sammi: I love her lines as well as her spirit. The cameras didn’t focus too much on her footwork, but it seems as if she was putting in the work and effort. Also, that chemistry was hot! She kind of reminds me of Melissa Rycroft with her personality.

Bruno: He wishes she can do it again because her posture and footwork were off.

Carrie Ann: She has potential she loves her lines.

Derek: He gives her some pointers on how her feet can help with her porture and core, but thinks she did well.

Song: All of Me by John Legend

Sammi: The chemistry was hot! He really seems to be putting in the effort by adding those rise and falls….and his frame is incredible. He may be a contender right now.

Carrie Ann: He has a presence, but watch for lifts.

Derek: It was smooth and beautiful, but watch the frame

Bruno: Well done on the rise and falls and he loved the chemistry.

Sammi: Her leg placement is really goot and even though her footwork could use some work, she really knows the rest of the moves and that hip action! WOW.

Derek: It made him smile and he loved it, but finish the moves.

Bruno: She is sparkly, but wants more hip and booty action.

Carrie Ann: She is a STAR!

Claim to Fame: The Real and Holey Moley host

Song: Tell It To My Heart by Taylor Dayne

Sammi: That was HOT. I like all the fun lifts and moves they put in and her smile just made everything that much more enjoyable. She talked about transforming and I can see this happening even more as the seaosn progresses.

Bruno: He loves the spirit, but wants her to work on her feet.

Carrie Ann: She is on her way to a transformation journey.

Derek: Well done, but work on those turns.

Sammi: That was a fun one to watch. He was a bit frentic, but he still managed to lead and keep his posture and footwork in tact.

Carrie Ann: He did well, but needs to tame the beast.

Derek: He is a leading man.

Bruno: He did well with such a difficult dance in week one.

Sammi: So far, she is the best of the night. Her youthful energy and natural talent on the floor make the ballroom light up and it is obvious she is putting a lot of work into making sure she gets the moves correcy.

Derek: He wanted more bend, but thought it was good.

Bruno: He gives some pointers, but thinks it was beautiful.

Sammi: She is havng the time of her life out there! Her smile, her energy….everything is incredible. The dancing is even better. It all came together so well and the technicality was the best we have seen all night.

Bruno: It was so good!

Carrie Ann: She offer some pointers, but otherwise loved it.

Derek: He thinks she has a lot of potential, but thinks it was a bit safe.

Song: The Way You Look Tonight by Frank Sinatra

Sammi: He seems so sweet and cute, especially when he gave her flowers. He reminds me of Andy Grammer from a few seasons ago….or Drew Scott. He just has that sweetness and determination with a hard work ethic to boot. It was a beautiful dance that reminded me of a wedding or prom scene in a movie.

Carrie Ann: The world needs more of him.

Derek: He wants him to work on his booty, but thinks he did well.

Bruno: He enjoyed it as well….but gives him some ideas on where to improve.

LEN! He does a video appearance to say hello and that he will be back.

Sammi: Dang boy! He really had the moves going on. However, he needs to work on being in a partnership because they seemed to be a bit off. However, once he is used to that,this pair will be unstoppable.

Derek: He thinks he did well, but keep it consistent.

Bruno: He is very lyrical, but work on those hips.

Carrie Ann: There was a moment where they got lost, so work on the connection, otherwise….very good!

Claim to Fame: One Day at a Time star

Sammi: Whoa, someone brought the sass to the ballroom tonight! Her bubbly personality, her dance moves, that smile….get it girl! She reminds me of Marisa Jaret Winokur from season six!

Bruno: He loved it.

Carrie Ann: She is on fire.

Derek: She is oozing charisma and did so well.

Sammi: OMG he is so cute. He is like a big teddy bear, he just seems so sweet and adorable. He definitely needs work, but he has that Jerry Springer likability, which is definitely a plus. Once he and Emma dance more, he may be someone to watch out for!

Carrie Ann: He needs to work on listening to the music more.

Derek: He was flatfooted and needs to work on technique, but he is a joy to watch.

Bruno: He got into the spirit of it.

Claim to Fame: Coach on Cheer

Song: My Wish by Rascal Flatts

Sammi: That was beautiful and graceful Not only were her lines and posture wonderful, but she gave the dance a lot of classiness. She reminds me of Candace Cameron Bure….just so pure.

Derek: It was a great first dance, but it was a bit stiff.

Bruno: Watch her shoulders, but it was exactly what a foxtrot should be.

Carrie Ann: She did like it, but noticed a LIFT.

Song: Ride Wit Me by Nelly

Sammi: Wow, that flip was incredible. He has got some rythym in those hips. Get it, Nelly! I love the smile and how he just looks like he is having a blast. He reminds me so much of Kel Mitchell from last season.

Bruno: He loved it, but watch the shoulders.

Carrie Ann: He has the groove, but open the heart more.

Derek: Good dance, but use ballroom shoes next time.

Song: Eye of the Tiger by Survivor

Sammi: I don’t know what I was expecting, but they were

Carrie Ann: She loved it, but pointed out some technical issues.

Derek: He gives her places to improve, but overall thinks she smashed it.

Bruno: He wants to hear her roar and come back.

More dancing and an elimination next Tuesday! Stay tuned.