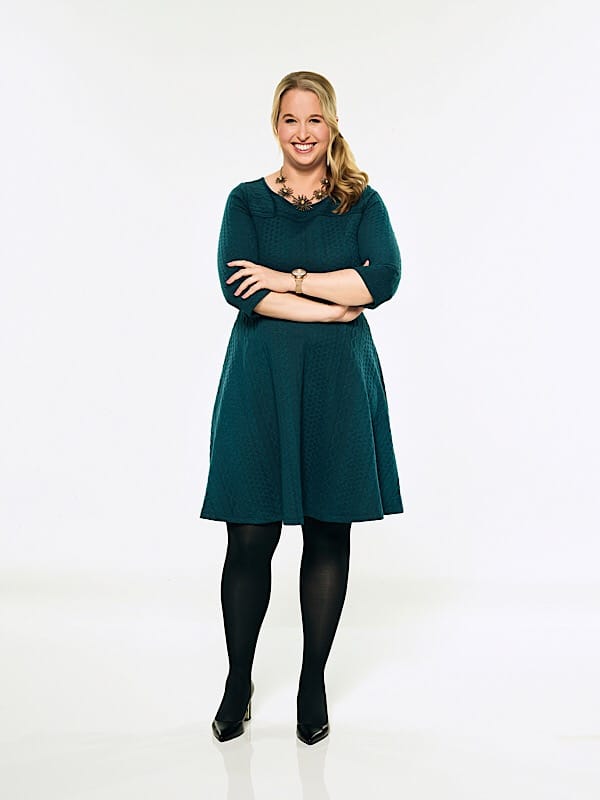 Tell me about your background?

I grew up in a reading family. I wasn’t allowed to watch commercial television until I was 12 years old (terrible, I know, for someone on TV now!), but I was allowed to read anything I wanted, and I devoured books. One of my earliest memories is reading encyclopedias out loud at the dinner table to learn more about whatever my family was discussing.

My dad and his best friend would sit around and read Trivial Pursuit cards to each other, and I remember how proud they were when they knew something really obscure. I don’t think I ever made the conscious choice to love trivia, but reading and knowledge were always around me, and it was definitely cool to know a lot of stuff. Plus – even though I said I wasn’t allowed to watch TV, that was a bit of a fib. The only television shows I was allowed to watch were Jeopardy and Star Trek, which pretty much sums up who I am today!

What was the biggest challenge growing up? What was it like being the smartest girl in the room?

I knew in elementary school that I was different from other kids – I memorized things quickly, I read all the time, and I was given the chance to do math several grade levels above of my peers. I loved it, but I could tell that it set me apart in a way that wasn’t necessarily positive. I have the clearest memory of one of my friends making fun of me for using an advanced vocabulary word. “Why are you showing off?” she said. I didn’t think that I was – I was just so excited that I had learned this word, because it seemed so delightful.

I was really lucky, in seventh grade, to move to a highly gifted school here in Los Angeles. Suddenly, I was surrounded by other kids – and other girls! – who learned the way I did, and who also loved regular 12-year-old stuff. We could be ourselves. That’s a huge part of why I love playing trivia – I spent so many years in a place where it was the rule, not the exception, to be a smart girl.

What made you decide to do Best Trivia Ever Show?

I’m a pretty competitive person. J I caught the game show bug in college when I competed on the College Jeopardy! Tournament, and then I was off and running. Actually – I was the last person in my family to go on a game show! After competing on three game shows as a contestant, I was so excited to play on the other side of the game, especially on a show as warm and fun as Best Ever Trivia Show.

What are some of your favorite memories from doing the show?

One of the best parts of the show was the chance to play along with my fellow Experts. These are some of the best trivia players anywhere, and the chance to learn from them was incredible. The Experts never stop talking about trivia – it’s a group that really loves facts. I remember, on one of the first days, looking up and realizing I was having lunch with Ken and Susannah and Raj and just marveling at how surreal it was! It’s weird – I don’t actually remember the games after I play them, probably because I’m concentrating so hard, so it was a blast this summer to watch each episode and have it all come flooding back to me.

I hope people can tell how much fun we had making the show, and how much all of the Experts love it when contestants get questions right. I hope it gives viewers a chance to be proud of what they know, and hopefully to learn something new! And I hope it proves that even the tiniest random fact – something you might think is just useless knowledge – can actually help you win a game show. There’s no such thing as useless knowledge – it’s all trivia to file away.

Do you consider yourself to be a role model for young girls watching? In what way?

I absolutely consider myself a role model for girls watching the show. I’ve worked in education for my entire career, and it breaks my heart when girls are afraid to be smart. As an educator, I want all kids to be proud of what they know, and I want all kids to love learning – but somewhere along the way, as they’re growing up, too many girls have internalized the idea that being smart isn’t valuable. I hope that those girls see me, Muffy, Susannah, and all of the female contestants, and that it sparks a belief in them that they could be like us one day – or even better than us! Nothing makes me happier than when one of my students knows something I don’t, and is so proud of how she learned it.

I’m starting to write a pancake cookbook – eating pancakes every day means that I have a lot of recipes kicking around my head!

Tell me a fun fact about yourself?

I love to cook and bake, so the Great British Baking Show is my very happy place – everyone on the show is so nice, and I never knew I could get so stressed over a cake! I just started binging New Girl – apparently I remind everyone of Jess – and I’m so sad that this is the last season of The Good Place. Seriously, if you want a crash course in philosophy and the best comedy on TV, you have to watch it.

The whole experience of being on “Best Ever Trivia Show” has been a dream come true. The chance to go on TV and play trivia is the most fun there is, and getting to do it with so many other smart, funny, friendly people makes this the best job in the world.