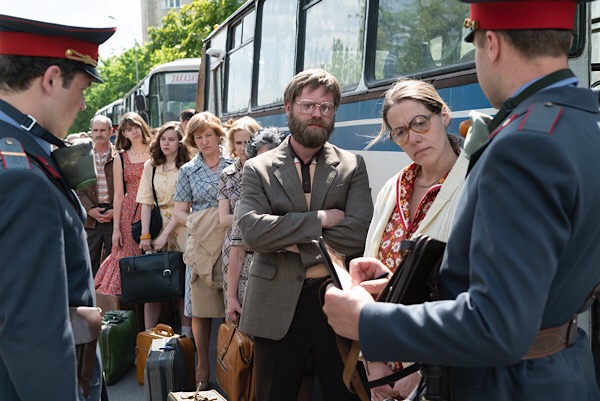 During the 2019 Emmy Awards ceremony, Craig Mazin, series creator and writer, expressed his gratitude to the people of Lithuania. “I want to point out that we did most of our work in Lithuania, and so I wanted to thank the country of Lithuania, and its government and its people who were amazing, and who let us into their home and who as former Soviet citizens gave so much of themselves to us as we made this program. (…) And I hope that in some small way our show has helped remind people of the value of the truth,” he said.

Chernobyl was primarily filmed in Vilnius neighbourhood Fabijoniškės, a district built around the period of the actual Chernobyl catastrophe in the late 1980s. It was chosen strategically for its dramatic architecture that resembles Pripyat, a nuclear city that served the Chernobyl Nuclear Power Plant. All in all, the show took almost 1000 hours to make, was shot in 40 locations, with nearly 5000 extras participating in filming.

The unprecedented Chernobyl success meant that the locations where the series was filmed became famous, too. Currently, there are tours taking people to where the show was shot, popular among tourists and locals alike.

Another film that is taking advantage of Vilnius’ Soviet-built neighborhoods is Young Wallander, an upcoming Netflix Original series. The show is based on the best-selling books by Henning Mankell, a popular Swedish author and reimagines Vilnius’ 1970s-built residential district of Šeškinė as the Swedish city of Malmö, where the protagonist, detective Kurt Wallander, lived. The filming started in Vilnius at the end of August.

On the other hand, Vilnius also offers its historical medieval Old Town with its Baroque architecture and winding narrow streets dotted with churches, listed as UNESCO’s World Heritage site, for shooting films depicting various periods. HBO/Sky’s Catherine the Great, filmed in Vilnius, is airing next week. Vilnius also served as a location for Netflix’s The Last Czars andBBC’s War and Peace, among others.

“The diversity of Vilnius as a movie location makes it a real draw for movie producers and film crews,” says mayor Šimašius. “It’s a dynamic and modern city, with a rich and sometimes painful past that is imprinted in our architecture – from inspiring, fascinating Old Town, to modern hipster New Town, to industrial buildings now used as nightclubs, to Soviet-era residential neighborhoods. By using our city as a movie set we also learn something about ourselves and our history, and have an opportunity to show it off to the world.”

Vilnius municipality has also created a website dedicated to everything Chernobyl-related in Vilnius.