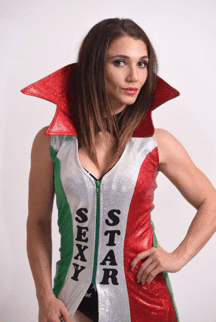 Garcia will make her much-anticipated MMA rules debut under the promotion of Combate Americas at the soon-to-be-announced ‘Combate Estrellas’ live television event in her hometown of Monterrey, N.L., Mexico on Friday, April 12.

“We are thrilled to welcome Dulce Garcia to the Combate Americas familia, and see her perform in La Jaula, and what is quickly emerging as the second biggest sport with Hispanic millennial fans worldwide,” said Combate Americas CEO Campbell McLaren.

Garcia notched three consecutive professional boxing victories in 2018 – her most recent, a six-round unanimous decision over Karla Islas on August 18 – to bring her overall record in the sport to an unblemished, 5-0.

Prior to making her boxing debut in April 2017, Garcia had appeared in 57 episodes of El Rey Network’s Lucha Libre television series, Lucha Underground, and was crowned the first women’s champion in the show’s history on April 9, 2016.

Combate Americas CEO Campbell McLaren, also the co-founder/co-creator of the Ultimate Fighting Championship (UFC), has been described by New York Magazine as “the marketing genius behind the UFC,” while Yahoo Sports has said he “knows more about the sport than just about anyone in it today.” With an unprecedented and cutting edge product and a blue-chip ownership and management team, Combate Americas is poised to break new ground and bring about a new era in world championship level MMA competition.