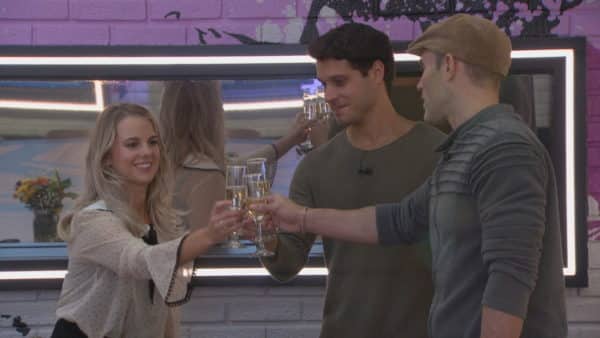 Season 22 of BIG BROTHER ALL-STARS follows a group of people living together in a house outfitted with 94 HD cameras and 113 microphones, recording their every move 24 hours a day. Each week, someone will be voted out of the house, with the last remaining Houseguest receiving the grand prize of $500,000. October 23, 2020 on the CBS Television Network Pictured: Nicole Franzel, Cody Calafiore and Enzo Palumbo Photo: Best Possible Screen Grab/CBS 2020 CBS Broadcasting, Inc. All Rights Reserved

Tonight is the penultimate episode of Big Brother All Stars on CBS. We will see part one of the HOH competition tonight and then continue on Wednesday for part two and to see who ultimately wins.

Before we get to that, we have a half hour of filler, where we see each of the final three’s journeys to get this far. Nicole thinks Ian was one of her closest allies in the beginning, along with Cody. She tried playing under the radar until the triple eviction, where she came out swinging.

Cody is glad he won the first HOH and made many final two deals and became a part of the house’s biggest alliance. He plans to NOT make the same mistake twice when it comes to the finals and thinks he may have a good chance of winning, especially since he has never been on the block.

Enzo played a good social game, which is what kept him safe, especially since he wasn’t in the big alliance. He thinks saving Nicole in the triple eviction could help or hurt him in the final three.

The previous non-jury evicted players talk about the final three. They think Cody has a good chance of taking it all, but Enzo might win due to his good social game. As for Nicole, they think she spent too much time riding Cody’s coattails, and that could work against her.

HOH time! It is a Scary Go Round, where they swing in circles from ropes and crash into things while being squirted with slime and rain. Enzo ends up falling first, leaving the competition between Cody and Nicole. The obstacle ropes lower, causing more opportunity to slam into things. Nicole finds a way to maneuver around it, but Cody realizes this too late, therefore falling and giving Nicole the win.