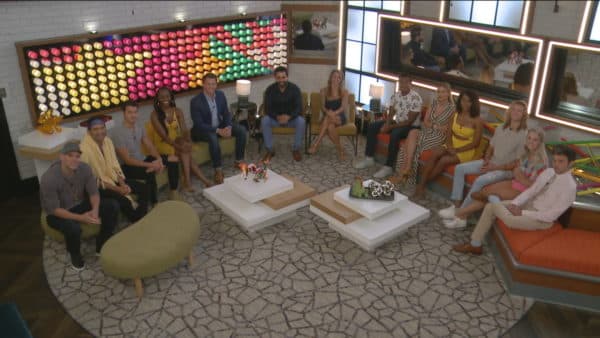 Season 22 of BIG BROTHER ALL-STARS follows a group of people living together in a house outfitted with 94 HD cameras and 113 microphones, recording their every move 24 hours a day. Each week, someone will be voted out of the house, with the last remaining Houseguest receiving the grand prize of $500,000. Airdate: September 3, 2020 (8:00-9:00PM, ET/PT) on the CBS Television Network Pictured: Cast Photo: Best Possible Screen Grab/CBS 2020 CBS Broadcasting, Inc. All Rights Reserved

Tonight was the beginning of week five on CBS’s Big Brother All Stars. On Thursday, we saw Kaysar get eliminated and Christmas become HOH. It is a new week of drama, challenges and competition as the house heats up!

Dani is ANGRY over Kaysar’s speech from last week, while Cody tries to do damage control. The Slick Six seems to be over and everyone is angry over what went down at the HOH competition.

Meanwhile, Christmas is trying to figure out who to put on the block. Due to her various alliances, it is slim pickings. She has her eyes on Da’Vonne and Bayleigh, epseically since Bayleigh told her Da’Vonne is one of her untouchables.

However, Enzo points out the pros and cons of getting rid of Dani and Ian, leaving Christmas rethinking her decision.

BB Basement time! They must find three power icons and fit it into an empty space to obtain said power…in the dark. David wins the Disruptor power, even though at one point he could have had another but changed his mind about taking it and putting it into the right space.

Dani finds the Replay piece, while Christmas finds the Blocker piece. Both fit it into the right space.

Christmas is secretive about it, but ends up sharing with Tyler. Her power allows her to save herself or another nominee from becoming a replacement nominee over the next three weeks.

Dani shares her power with Nicole, which allows for back to back HOH for herself or someone else over three next three weeks.

David tells nobody about his power, which is to secretly save a nominee over the next three weeks.

Nomination time! Da’Vonne and Bayleigh are the nominees, due to the untouchables comment.