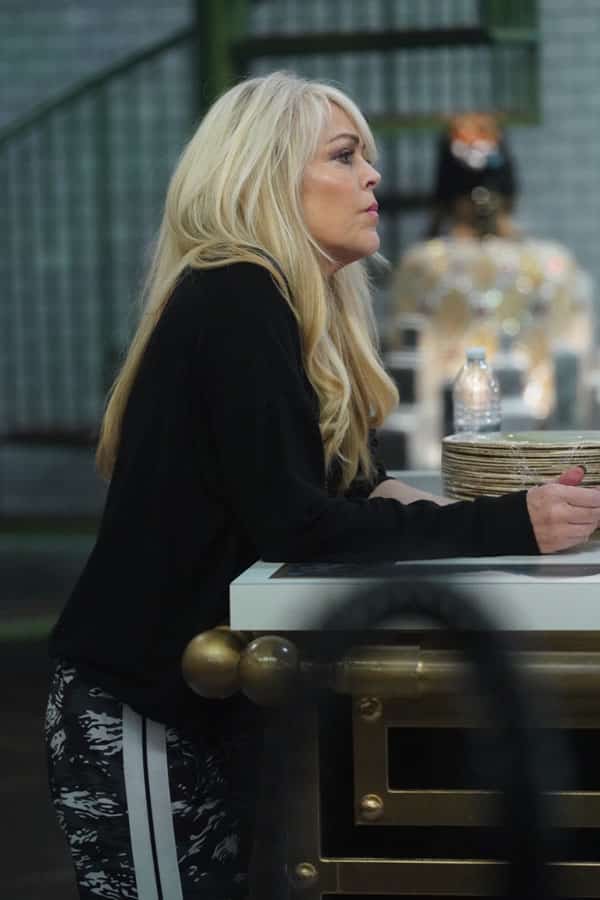 Tonight is night eleven of Celebrity Big Brother on CBS. Last time, Tom Green won his second HOH and put Natalie Eva Marie and Ricky Williams on the block. Eva felt betrayed, while LoLo Jones got angry because now she thought she was going to be a pawn.

Tonight is also double elimination night. Julie Chen Moonves says the houseguests have actually been in the house for 24 days.

Tom says he nominated Natalie because she is a threat and Ricky because he is the head of the alliance. The plan is now to backdoor LoLo so he can officially break the alliance up.

Kandi Burruss and Tom discuss breaking up the alliance and how once that happens, the power in the house will shift. Tom worries Tamar Braxton will be shifted by social energy.

Ricky, LoLo and Natalie plan to have one of them (hopefully LoLo) win the POV, take Natalie off and see who Tom picks as he replacement nominee.

Kandi wants to win so she can keep the nominations the same and get rid 0of Natalie.

Julie tells them there is a double elimination tonight, causing tension and chaos in the house.

The competition has a black and white movie theme and shows them a sequence of colors. They have to put them in order in order to move on.

TOM IS THE WINNER!!!

Tom and Kandi bicker about what the next move should be. He wants to put up Tamar, but Kandi doesn’t like that and feels like Tom is acting like a dictator. She goes to fill Tamar in on Tom’s plan to put her up to get rid of Ricky. Tamar says it’s whatever, but she isn’t happy. Tamar fills Natalie and Ricky in on Tom’s plan and Natalie comes to the conclusion that Tom is playing mind games.

POV Ceremony! Tom uses the POV on Ricky and puts up LoLo. I did not see that coming with Ricky, especially since he was so determined to get rid of him.

Everyone is shocked. Kandi is excited that Natalie is still on the block.

Natalie isn’t sure what to do because she is up against her ride or die. She rallies around the house to get the votes she needs to stay. Dina isn’t sure, while Ricky says he is leaning toward her.

Eviction time! Both girls give their speeches as to why they should stay. Then we get to the votes.

In a 4-0 vote, Natalie is evicted from the Big Brother Household. Everyone hugs and cheers for her as she leaves.

Before we get to her interview, we get the final breaking news of the season. The remaining houseguests have the chance to save themselves from the second eviction. They will all compete in the safety competition and the winner will have immunity. They will, however, not be able to compete in the HOH competition.

Natalie quips that she thought the twist would allow her back in. She then wants LoLo to win the safety competition, but will be ok with Tamar or Ricky winning.

Safety competition! They have to determine how many hidden people are in the house.

There were 21 people there and Tamar won with the closest guess of 19.

HOH competition! They now have to see how many living art people have disappeared.

LoLo wins! She nominates Tom and Kandi for eviction. She has a hard time deciding but chooses Tom because he wins everything and Kandi because she is under pressure to pick someone.

POV competition. Last season’s Metta World Peace and Ross Matthews are in an Odd Couple type sitcom. They then have to answer true or false questions.

Tamar wins after doing a tiebreaker with Ricky. She decides to not use her power in Natalie’s honor. The nominations stay as is.

Each one gives their reasons as to why they should stay.

In a 3-0 Tom Green is now evicted from the Big Brother Household. In his exit interview, he says he is rooting for LoLo. He admits the odds were against him after his alliance started leaving and that there was some drama with his wins. He also admits targeting the men seemed like a good idea at the time, but hindsight is 20/20.