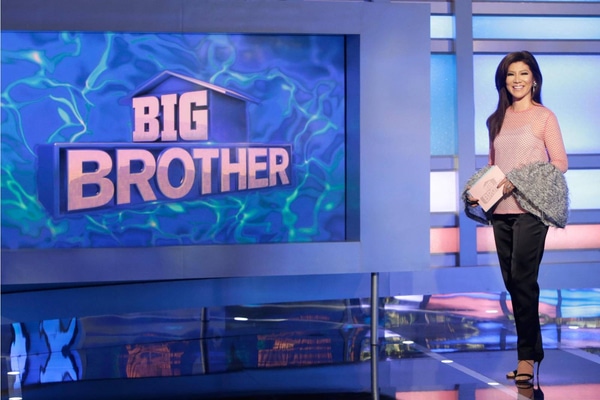 Tonight is the very first episode of CBS’s Celebrity Big Brother. The original Big Brother has been on since 2000, but this is the first time we have celebrities in the house.

Um, Julie Chen usually dresses so cute—WTF with that dress?

Real Housewife Brandi Glanville—She has her own wine line? She can’t be that be that bad if she knows good wine.

Metta World Peace—He used to be Ron Artest and changed his name to be different. I remember he did this during his Dancing With The Stars season.

Ariadna Gutierrez—She is best known for accidentally being crowned Miss Universe by Steve Harvey. She looks like a baby Sofia Vegara.

Ross Matthews—He got his start as Ross the Intern and is now an entertainment journalist.

Shannon Elizabeth—She is Nadia from American Pie and lives in South Africa.

Chuck Liddell—He is an MMA fighter with a soft spot for his daughters.

Keisha Knight Pulliam—Rudy from The Cosby Show is all grown up!

Marissa Jaret Winokur—She is a Tony Award winning actress and grew up in the county where I went to college! (Westchester County—REPRESENT!!!)

James Maslow—He is from the show and band Big Time Rush.

Omarosa—She is most famous for Celebrity Apprentice and working for President Trump. (I’m not going to lie, I have always had a soft spot for her.)

Everyone meets in the house and greets one another. Ross is not happy that Omarosa is there. Shannon is not sure how she feels about rooming with Omarosa, but it too excited to care at the moment.

Brandi and James seem to get off on the wrong foot, which upsets him. However, he is determined to win HOH and put her up for eviction.

Omarosa and Shannon form an alliance and get the other ladies on board.

HOH Competition!! Everyone randomly chooses a star to stand on and if their number is chosen, they will be safe.

The competition itself has them hugging an award and the last one standing wins. As they hold on, they watch a song and dance number….performed by Big Brother alumni. They also get covered with powder and gel. The statues also start to spin to make it more challenging.

Everyone gets a special gift bag. Some have swag, while others have one that contains a power to recast the HOH.

Tune in for more tomorrow!