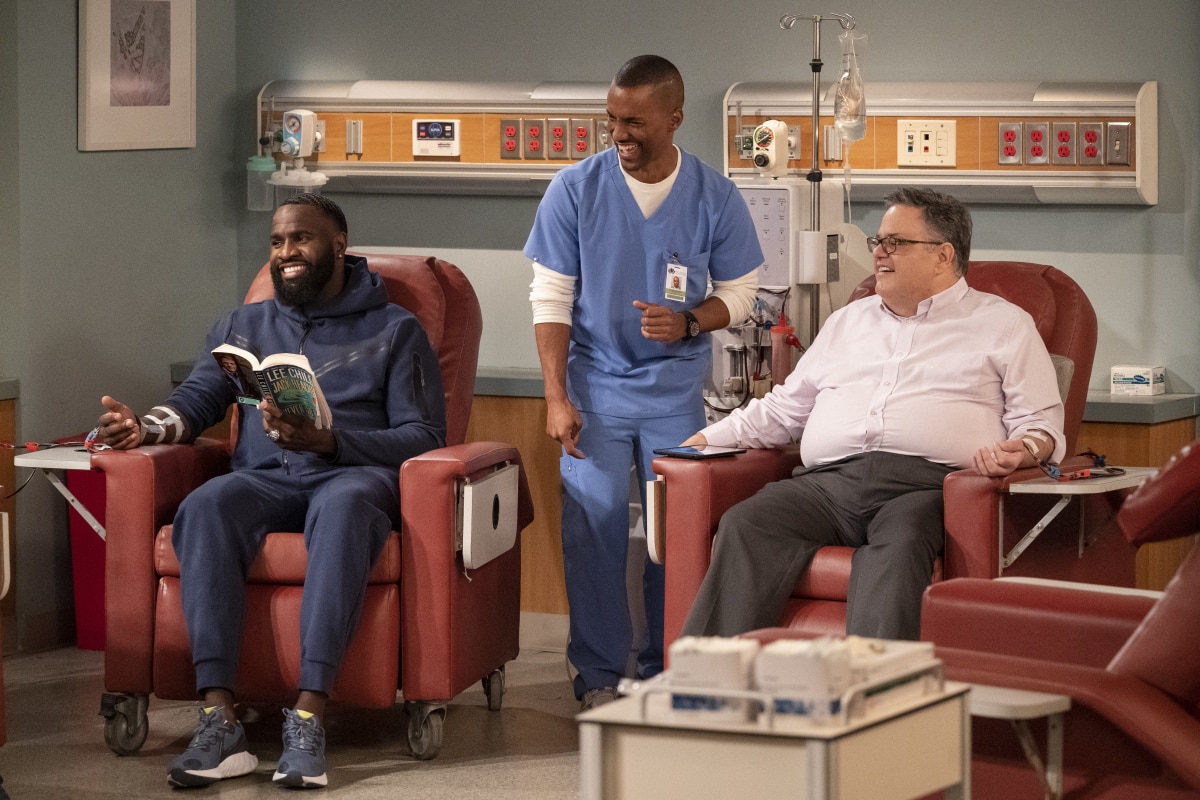 ICYMI: B Positive Recap for B Negative

The episode opens with Jerry (David Anthony Higgins) talking to Gideon (Darryl Stephens), Samantha Briga Heelan) , Eli (Terrence Terrell) and Drew (Thomas Middleditch) about his high school girlfriend. They all know the details, including how she cheated on him and he went on to become one of his dental patients.

As everyone snarks on him, Jerry gets the call that he has a kidney donor. Everyone is happy, except for Samantha, who screams ‘son of a bitch!’ Gideon thinks he is going to cry because he never saw anyone get the call before, but the moment passes.

The gang goes out to celebrate with Gina (Annaleigh Ashford) and toast to Jerry. He is excited for his future and they begin to share their plans with each other.

While they chat, Gina and Gideon realize they dated the same guy, while Drew realizes he needs to think about his future, prompting Gina to think about what she wants to do. She wants more than driving people around at the retirement home…..then realizes she left them outside.

The next day, she teaches a pie making class with Gabby (Kether Donahue), saying the joint rolling class is on hold. Norma (Linda Lavin) and Mr Knudsen (Bernie Kopell) banter with each other during the class. She wonders why he is there and he says it is to meet the ladies. She wants him to show the ladies he can be quiet.

Gabby and Gina begin to talk about the future and her post-transplant plans. Norma overhears and is hurt she wants to leave.

At home, Drew surprises Maddie (Izzy G)with a post-transplant trip to Iceland. She is excited and goes to tell her friend Charlotte, who is going to Hawaii, calling it lame. Drew scoffs that it is indeed lame when Gina comes home. She asks him to read it and he points out it is completely exaggerated. However, she says she is spinning her real jobs by using words that make them sound better.

The next day, she and Norma go to eat blueberry pie they got from one of the women. Norma says she wrote her a letter of recommendation, which turns out to be one big guilt trip.

Drew goes to see Jerry, who is out of surgery. He has flowers for him, courtesy of his ex-wife, but Jerry says he is allergic and she knows it. Drew tosses them and asks how he is doing. Jerry is entranced by the morphine button as he fills him in on everything.

The nurse walks in and tells Jerry his body may be rejecting the kidney.

At the nursing home, Gabby and Gina lead a bingo game. As Gabby reads the numbers, (with odd comments), Gina and Norma argue over the letter. Norma storms out and Mr. G steals her bingo sheet.

The dialysis gang is in the hospital. Samantha is stress eating, causing Drew to complain that her crunching is waking up coma patients. Eli is scratching lottery tickets, even though they are meant for Jerry.

Gideon walks in and confirms that Jerry’s body rejected the kidney. He goes to the chapel, saying someone has to answer to this, while everyone remains in shock.

Norma reads another letter of recommendation, this time saying how wonderful Gina is and how any company would be lucky to have her. They bond a bit and admit they are like family.

The gang is with Jerry when Gina comes in, celebrating. Drew drags her out to give her the news, which she apparently missed.

Everyone continues to encourage Jerry, who says they were with him on the best and worst day of his life. Gina says she knows how he feels, recalling a cruise where she saw a couple get married and then the wife get thrown overboard.

Drew and Gina leave the hospital. She tells him she loved how encouraging he was to Jerry, causing him to have a meltdown because this is unfair and could happen to him. He storms off to take the stairs when the elevator won’t open. As soon as he is gone, the doors open and Gina walks in crying.

Back at dialysis, Eli is on the phone with Jerry, saying they love him. He tells them he is doing great and even met a fly honey on Tinder, but it is actually Eli trying to give him encouragement. Samantha sarcastically says that will go well.

Eli realizes Drew is missing, so Gideon calls him. It turns out he and Maddie are on the plane, headed for Iceland as the episode ends.