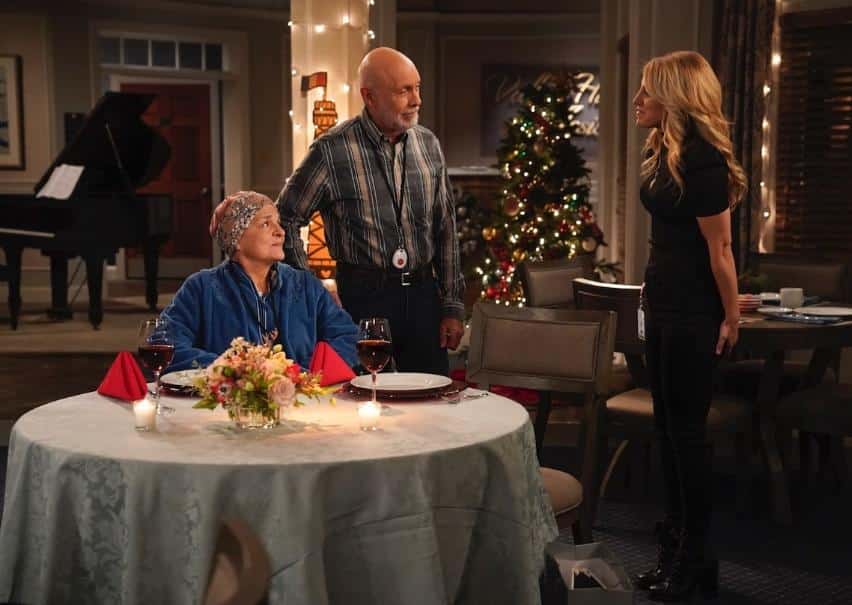 ICYMI: B Positive Recap for A Dog, a Mousse and a Bat

The episode opens with Bette showing Peter and Jerry a picture she is planning on sending Spencer. Peter compliments her plastic surgery, while Jerry wants to know why she is sending it since they are in a fight. Bette says it is a reminder of what he can’t have and sends it, causing him to choke on his coffee and saying it is indeed a good morning.

Gina greets Meredith and Harry, who are eating breakfast with Cannoli in tow. She says she hopes the dog isn’t bothering them, but they assure her everything is fine.

She goes to get food when Harry takes her aside to tell her he wants to plan a special dinner for his wedding anniversary. He says Meredith always wanted to go to Paris, so he wants to have a French theme. After a song and dance, she agrees to do it and asks Bert for help, even though he has some unorthodox ideas.

Drew FaceTimes Gina to give an update on his road trip. He uses a lot of trucker talk and announces he drove a total of 12 miles and might get a breakfast burrito later.

Norma comes in to talk to her, so Gina hangs up. It turns out Norma wants her to be her healthcare proxy when she has her surgery, Gina wonders why she didn’t ask her daughter, but Norma says she is more like a daughter. Gina agrees to help her and tells her she will be fine.

Drew makes an Instagram video when he is attacked by a bat. As he runs out of his RV, he meets a girl named Hannah. They two of them hit it off and decide to have a drink together.

Gina goes to take Cannoli for a walk, but he is visiting with Meredith and Harry. Meredith tells Harry to walk her so she can talk to Gina. Harry goes and says he hopes Cannoli goes number one.

Meredith gives Gina a special necklace that is a family heirloom. Gina is touched and surprised, but Meredith tells her it is because she has been so good to them. She also tells her not to tell Harry or Gabby.

Hannah and Drew continue to hit it off, get drunk and hook up.

Gina goes to check on Bert’s progress for the dinner, but it turns out he is at the bar. She goes to get Gabby to take Norma to the hospital, which confuses Gabby and upsets Norma. Gina promises to be there as soon as she can as she rushes to get Bert. He is doing shots and drinking beer because he freaked out making the dinner. She convinces him he can do it, so he gets up to leave, asking the bartender for coffee and a cigarette dipped in crystal meth. Gina tells him to just give him the coffee.

Drew wakes up to find out he was robbed by Hannah.

That night, Harry takes Meredith into the dining room, where Gideon and Gina are waiting. They all hug and leave the happy couple to eat the meal prepared by Bert. It turns out to be delicious and Bert confesses he went to culinary school, but cocaine ruined his life.m

As they eat, Harry gives Meredith a photo album of their life together. They look at memories and share a kiss.

Gina drives to the hospital but gets pulled over. She tearfully tells the cop about Norma, so he lets her off with a warning and goes to run her license.

Harry and Jerry are in the hallway talking when Cannoli starts barking. It turns out Meredith isn’t breathing, so Harry goes to help her, screaming at Jerry to call 911.

The episode ends with Drew making an Instagram video about last night when Gina calls. She tells him about Meredith and that she is in jail.

Tags: a Mousse and a Bat b positive CBS icymi ICYMI: B Positive Recap for A Dog Recap