In Pursuit With John Walsh: Isaac Estrada and Nalio Williams

During Easter 2015, Courtney Phillips and a friend made plans for a weekend getaway in San Antonio. The 23-year old single mom lived just outside of Dallas.

Her friend Misty said that Courtney called her that weekend, saying that she was in San Antonio and asked her to join her, even sending a plane ticket. At the time, Misty was at work, but said she would call her back when she was done.

Sadly, things would come to a tragic end for Courtney on Easter Sunday. That afternoon, a 911 call was made, stating that a homicide had taken place.

Police arrived to the scene, where they found Courtney brutally stabbed to death. She had also been robbed, but due to the nature of the scene, investigators think that there was a more sinister motive for her murder.

Authorities questioned the man who made the call. He lived in the area and seemed very shaken up by the entire incident. He was covered with blood and was able to identify Courtney.

It turned out they knew each other, but were not romantically involved. He knew Courtney was meeting someone at the house and assumed it was a friend.

After dropping her off, he went home, but got worried, when he failed to reach her later on that day. This led to him going to the house and finding her dead.

News of the murder quickly spread to her friends and family, all of whom were shattered by the news.

Her friend Rachel recalls Courtney having a tough life and how she and her husband stepped in to help Courtney raise her son Jace. She said Courtney had big plans for a better life for the both of them.

During the investigation, police discover that the house Courtney was staying at belonged to people who had no prior connection to her. Nobody knew why she was there, so they look into her cell phone records, where they found out she had been communicating with 19 year old Isaac Estrada just prior to her death.

A Suspect Is Found

Isaac becomes an immediate suspect and due to the MO of the crime, is thought to have done this before….and will have future victims.

However, they don’t have a lot to go on, except that this was the first time he was said to have been meeting Courtney in person.

It is then discovered that he had committed another crime eerily similar to Courtney’s only three months prior to her death.

The investigation then goes online, where they discover that this is where and how he gets his victims. 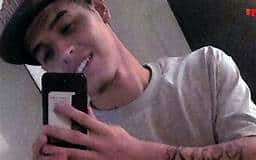 This leads to a wild goose chase that shows that he is in Mexico. He appears to be staying with family and friends, and even posts on social media. However, he is always one step ahead of authorities as they try to track him down.

The case goes cold until December 2019, when authorities discover he is in Sabinas. Although they have surveillance on him, he disappears as they close in on him.

Courtney’s family, including her son Jace, remember her and won’t stop until justice is served.

Isaac is 5’1″, 105 lbs and has  two tattoos one with the word keeper on one arm and another with the word brother on the other arm.

Three days before Christmas in 2011, police receive a call about what initially seemed like a carjacking gone wrong. However, it turned out to be murder.

Cal Walsh meets with Lt. Shane Schroeder, who talks about the call they got that fateful night. The area where the gunshots were located was closed, so they went to investigate.

It was then that they discovered Ray Modia’s bloody, lifeless body by his car. It looked as if he tried to escape, only to get shot to death.

He had no ID on him, but authorities confirmed his identity via his cell phone.

Lt. Schroeder described him as a devoted dad and husband who had no prior criminal history. He inferred that Ray was trying to sell his Mercedes, not knowing it was a set up.

The two men look at video surveillance from the night of the murder, as well as evidence photos. They see a white pick up truck and an African-American male, but it is not until they go through Ray’s cell phone that the male in question is identified as Nalio Williams. The two had been corresponding prior to the murder regarding the meeting. Nalio’s fingerprint was also at the scene, making it even easier to identify him. Text messages also show Nailo giving Ray directions to what would be his own murder.

Nalio had a prior criminal history for identity theft, fraud and racketeering, but a motive for Ray’s murder is unknown.

Cal then talks to Ray’s childhood friend Roberto, who shares fond memories of his late friend. He also shared that Ray had a business where he rented luxury cars out to people for extra income.

About six months before his murder, a car had been stolen from him. Roberto had no clue what happened after, but wondered if he got desperate and it led to him getting killed.

Frances Robles, who is an investigative reporter, talks to Cal about getting involved in the case. She discovered that the car business had some shady dealings with stolen cars, which could to have led to him getting getting killed.

It turns out the man behind the stolen cars was Jack Mesadieu. Authorities think he is the one who set Ray up to be killed by Nalio.

It turned out Nalio got shot the night of the murder as well, possibly by Ray in self defense. He had gone to the hospital, where he was treated and interviewed by detectives, possibly using a fake name.

He might be in the Caribbean, Jamaica or the Bahamas, or even still in the USA.

Nalio has a Jesus how I love thee tattoo on one arm and a deck of cards tattoo on the other. He also might have a bullet scar on his leg.

Marcus Ethan Garrett is wanted for sexual impropriety with a 12 year old girl. He was last seen in Rankin County, Mississippi.

Jorge Gomez is wanted for the murder of his girlfriend in Durham, North Carolina on December 26, 2020.

Fifteen year old Kristen Galvan has been missing since January 2, 2020. Her family thinks she was lured out of their Spring, Texas home.

Patrick Alford has been missing since January 22, 2010, when he was helping his foster mom take out the trash. He went missing from the hallway and has not been seen since. He would be 18 years old today.