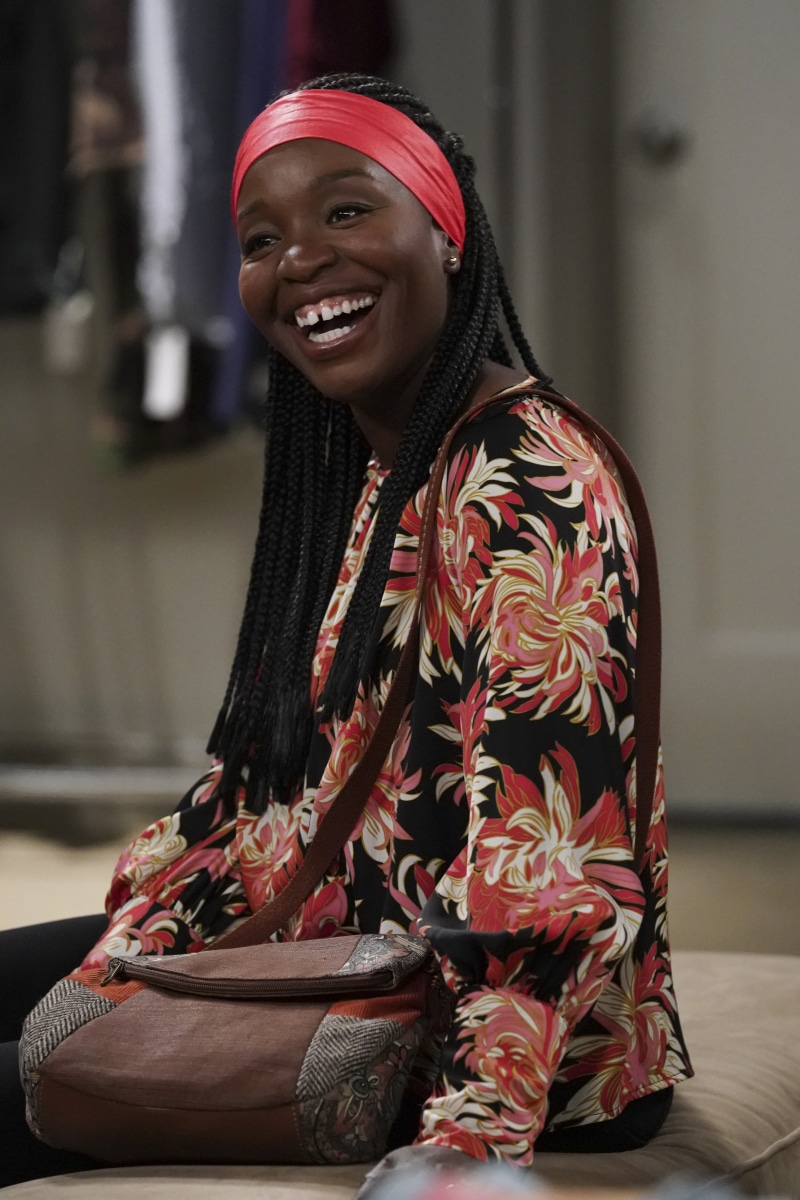 “Sights and Bites” – Abishola is nervous about Dele’s trip to Nigeria with his father. Also, Bob creates a guidebook on Nigeria for Dele that he proudly calls “Sights and Bites,” on BOB HEARTS ABISHOLA, Monday, May 3 (8:30-9:00 PM, ET/PT) on the CBS Television Network. Pictured (L-R): Folake Olowofoyeku as Abishola. Photo: Michael Yarish/©2021 Warner Bros. Entertainment Inc. All Rights Reserved.

The episode opens with Dele(Travis Wolfe, Jr.) packing for Nigeria. Abishola (Folake Olowfoyeku), Tunde (Barry Shabaka Henley) and Olu (Shola Adewusi) help him by giving him things to bring, such as blenders, video game consoles and champagne. Dele wonders why they are getting these things when he cannot. The adults say he doesn’t need them, but his family in Nigeria needs to see how well they are doing in America.

Dele wonders how he is going to pack his stuff, so Abishola tells him to wear as many clothes as possible. Tunde says that this way, they can send over more champagne.

Later on, Bob (Billy Gardell) and Abishola take Dele shopping for a suit. Abishola thinks he looks too nice and worries what the Nigerian family will think.

She has him try on more clothes and talks to Bob about how she is worried about Dele leaving. He tells her she has to let him fly, but she wants to find a way to track him while he is away. She also says Bob would be ripe for the picking in Nigeria with his clothes….like a ripe American plum.

That evening, Bob is at home with Dottie (Christine Ebersole) and Christina (Maribeth Monroe). Dottie also says Bob looks like a plum, so he asks why no one told him he looked like a fruit. Dottie says she doesn’t even use that word anymore.

The topic switches to Dele getting ready for his trip, leading Dottie to recall sending Bob away to sleepaway camp. She says he came back a hippie, which leads to her and Christina debating on co-dependence.

Bob thinks Dele going away will be good for both him and Abishola, but won’t tell her that.

At the hospital, Abishola is eating lunch with Gloria (Vernee Watson) and Kemi (Gina Yashere), while tracking Dele on her phone. She is concerned about his whereabouts since he is moving around a lot, so Kemi suggests he may be smoking, or that he has a tiny bladder.

Abishola says that she will sniff him when he gets home, leading to the ladies debating on what to do in terms of spying on their kids.

Bob meets with Kofo (Anthony Okungbowa), Goodwin (Bayo Akinfemi) and Douglas (Matt Jones) at the warehouse. He wants to make a special book for Dele to take to Nigeria with him and asks them for ideas. He wants to make a Nigerian guide book that is not only accurate, but also fun.

Later on, Bob and Abishola track down Dele, who is out with a girl. When they start kissing, Abishola gets out of the car and begin chasing him. Bob tries to warn Dele, but he is too far away.

In the car, Dele tries to argue that he did nothing wrong, but Abishola is having none of it. The argument continues at home, this time with Tunde and Olu chiming in. Bob says it is not worth fighting over this before he leaves, but Abishola says that he is not going to Nigeria anymore. This causes another argument and Abishola worrying about Dele impregnating the girl and never becoming a doctor.

Abishola later discusses the issue with Kemi, who says it is a good idea for Dele to go because it worked with her son, who is now a lawyer. However, he doesn’t speak to her much. Her daughter on the other hand, didn’t go away and was in a band. Abishola says it was the LA Philharmonic, but Kemi argues that it is still a large band.

Bob and Abishola go to the laundromat, where Bob is still working on his book for Dele. He asks Abishola for help, but she isn’t interested….except to do corrections.

Tayo (Dayo Ade) arrives to pick up Dele, still trying to impress the family. Bob tries to impress him with Nigerian road knowledge while everyone else says goodbye to Dele.

Abishola walks in, so everyone decides to give them space to have their own heart warming goodbye.

In the car, Dele reads the book from Bob, which has a special note from Abishola at the end.

The episode closes with everyone spying on Dele via the app and Bob bragging about his book.