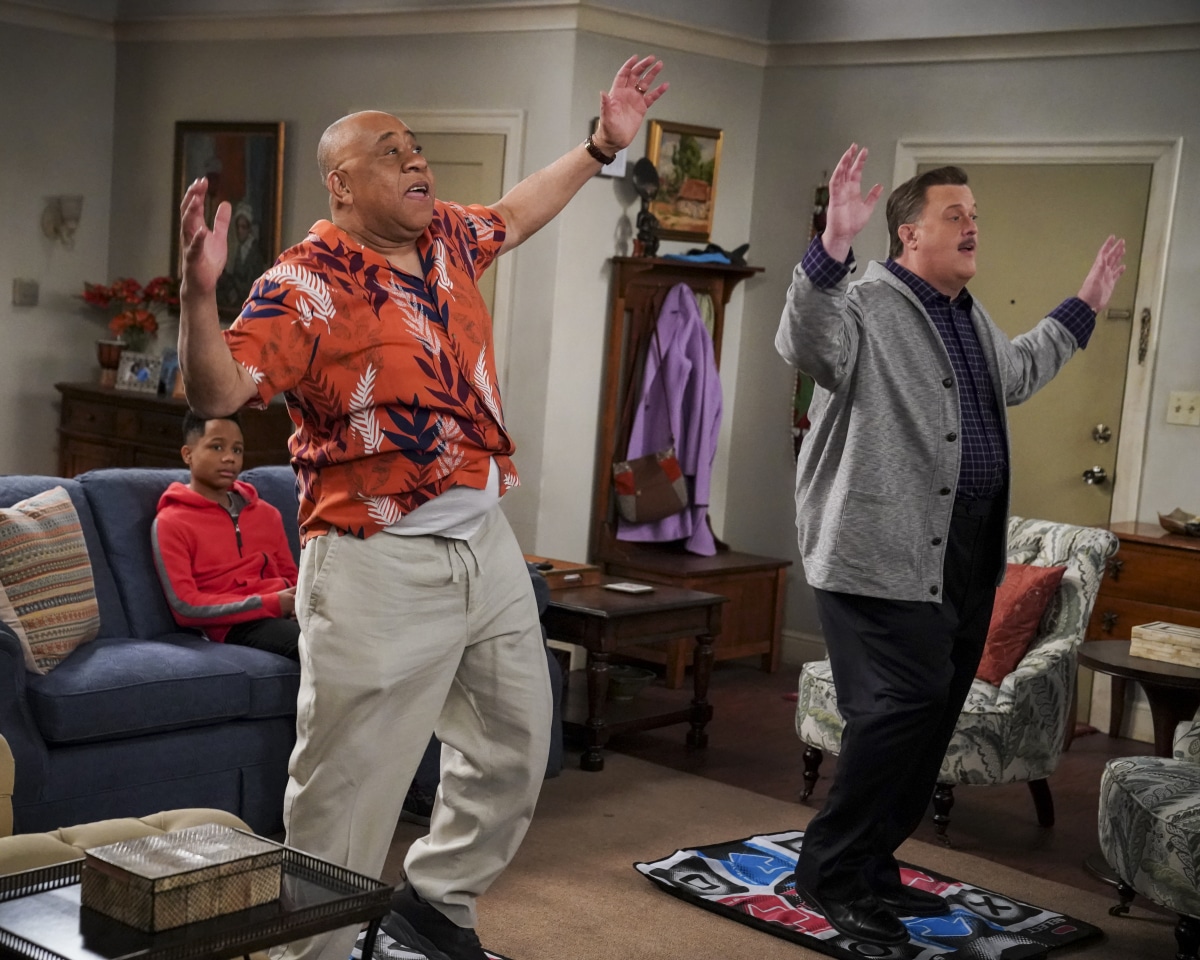 ÒI Did Not Raise Him to be a TeenagerÓ Ð When Abishola puts her foot down about Dele not going to Nigeria with his father, Dele rebels against her for the very first time, on BOB HEARTS ABISHOLA, Monday, March 8 (8:30-9:00 PM, ET/PT) on the CBS Television Network. Pictured (L-R): Travis Wolfe, Jr. as Dele, Barry Shabaka Henley as Uncle Tunde, and Billy Gardell as Bob. Photo: Michael Yarish/CBS ©2021 CBS Broadcasting, Inc. All Rights Reserved.

ICYMI: Bob Hearts Abishola Recap for I Did Not Raise Him to be a Teenager

The episode opens with Bob (Billy Gardell) coming over to Abishola’s place. When he knocks on the door, Tunde (Barry Shabaka Henley) questions him to make sure it is him and he is really alone. When he lets Bob in, he explains that he is not allowed to let any of Tayo’s relatives in. Bob snarks at him by asking if he really looks like Tayo’s relatives.

Tunde goes on to explain that there is tension in the house over Abishola not letting Dele go to Nigeria. He says she was even short with Olu, which can tempt the devil. He says if Bob ever says he called her the devil, he would call him a liar. Bob then asks if he can go talk to Abishola, but Tunde warns him again.

Bob goes into the kitchen where Abishola (Folake Olowofoyeku) is cooking supper. He tries to talk to her, but she rants about how Dele is her son and Tayo has no right to take him to Nigeria since she was the one who raised him. She continues slamming things down as Bob backs away and into the next room.

At dinner, Dele (Travis Wolfe Jr) refuses to eat. Abishola tells him that he has to do what she says, but he just pushes his plate away. Bob tries to ease the tension by asking for more food, while Olu (Shola Adewusi) chugs wine. Abishola threatens to throw the food out, but Tunde grabs the plate, saying Dele cannot leave until he finishes his portion.

The next day, Bob comes in with the things that Abishola took away from Dele. Kofo (Anthony Okungbowa) and Goodwin (Bayo Akinfemi) walk in, so Bob tells them what happened. They say that Dele will never see these things again and share stories of their own childhood punishments. Bob asks if they would do that with their kids, but they say it is child abuse.

Abishola is having lunch with Gloria (Vernee Watson) and Kemi (Gina Yashere) and tells them what happened the night before. They tell her that she is raising a teenager now, but she says that she didn’t expect this. The women share their own stories of raising their teens, causing them to snark on each other for the trouble they got into.

Dele is at Bob’s with Douglas (Matt Jones) and Christina (Maribeth Monroe). She is making him a grilled cheese and plans to talk to him. He says she will make an awesome aunt because she is quirky, out of touch with reality and just needs a cat in a stroller. They go to talk to Dele, but Douglas warns her not to bring up her therapist.

At first, Dele is hesitant to open up, but he finally tells them he isn’t allowed to do anything for himself. The two are silent, but Christina finally tells him about her therapist, annoying Douglas.

At PT, Dottie (Christine Ebersole) says Dele is just testing Abishola, but she refuses to listen. Dottie even goes as far as to tell her own tales of raising kids. Abishola is still certain she is correct, but Dottie turns the tables on her by asking her how often she talks to her mother, who raised her the same way. Abishola says she calls every day, but she answers once a week. Dottie says she talks to her kids morning, noon and night and there is love underneath the fighting.

On the bus, Abishola gives Dele a video game with a dance theme. He appreciates it, but says he cannot play it. She says he can and reminds him that his father doesn’t want him to dance. He reminds her that she doesn’t either. She asks him why he can’t play and he says he doesn’t have the console and cannot play it on the VCR. They make up, but she still refuses to let him go to Nigeria and he in turn refuses to eat. This leads to her taking the game away.

Tayo (Dayo Ade) arrives the next morning to take Dele to school. He guilts her into it by saying that he thought she wanted him to never see their son. She tells Dele his father is there to take him to school and to come straight home after. After they are gone, she says she is a fool, but Tunde tells her that she isn’t, but Tayo is just smarter than her.

Abishola tells Kemi the story on the bus. Kemi compares it to her own children, saying she only loves the successful lawyer. Abishola calls her out on this, but Kemi says it is a numbers game.

That afternoon, Bob gives Abishola the things she took away from Dele. He makes a bad joke and she says he is a good guy despite the jokes. She asks him if he ever wanted kids, and he said he did, but things were complicated with Lorianne. She says that she knew it was because of endometriosis since she was her nurse. He brings up them having kids, but it upsets her, so she leaves. He wonders why since she is the one who brought it up.

Later on, Abishola talks to Dele and gives him permission to go to Nigeria, but he must represent the family well and call often. He goes to get ready for dinner, but she makes him continue to fold his laundry.

The show ends with Bob and Tunde dancing to Dele’s video. Dele wants to play and makes fun of them, which gets him sent to his room.