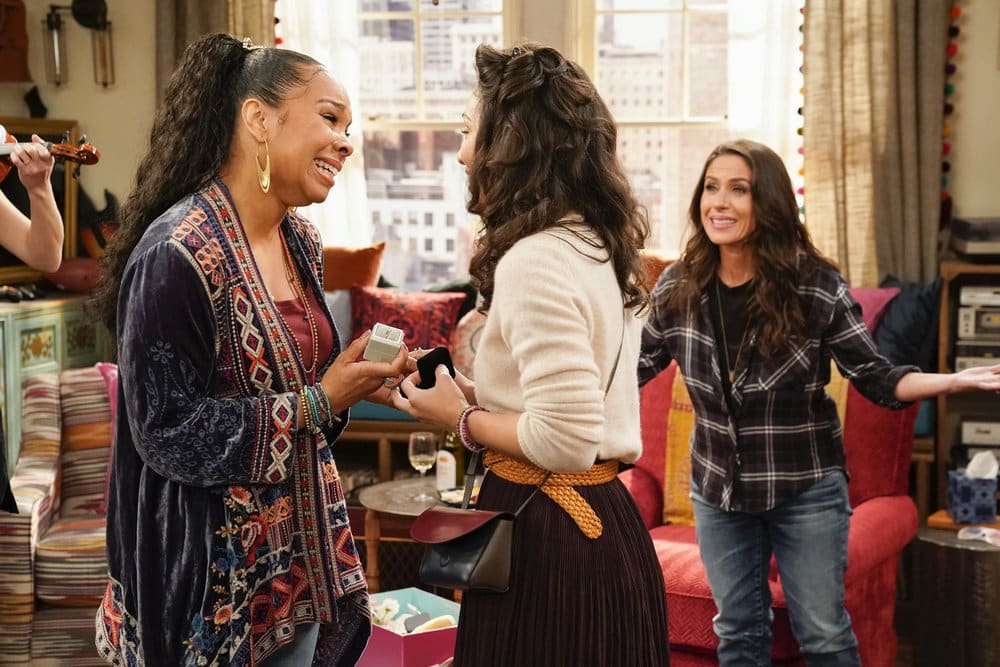 ICYMI: Punky Brewster Recap for Put A Ring on It

The episode opens with Punky (Soliel Moon Frye), Lauren (Jasika Nicole) and Cherie (Cherie Johnson) having lunch together. Cherie and Punky predict each others orders, which Lauren finds adorable. They watch an old couple on a date and wish to be like them….until they start bickering.

Lauren goes to take a work call when Punky realizes something is going on with Cherie. She asks what is wrong and Cherie says she is ready to propose to Lauren. Punky is thrilled, but Cherie tells her to be quiet about it for now. However, she does ask her to be her maid of honor…..or best woman.

Lauren returns and sees Punky stuffing her face with bread. She wonders what is going on, but Punky says she is just hungry.

Hannah(Lauren Lindsey Donsiz) and Bree (Hanini Taylor) are studying and discuss how the Civil War guys are like hipsters with their beards, but probably stinky. They also agree that General Grant is a hottie.

Diego (Noah Cottrell) walks in, much to Hannah’s chagrin. He apparently has a crush on Bree and wants to try and impress her with nunchucks and beatboxing. Bree thinks it is sweet and asks for Diego’s age.

Later on, Punky and Cherie begin wedding planning. Punky has gone all out with Pinterest boards and even found a way for her to get married by Dolly Parton. Cherie appreciates the help, but says they also need to find a ring for Lauren. This leads to them going shopping and looking at rings together.

However, Cherie begins to get cold feet. She says she loves Lauren, but is scared because she never felt like this before and because she never thought she would be allowed to get married. Punky talks to her about it and reminds her of all the amazing moments they had together.

Cherie decides to give Lauren her grandma’s ring and says she wishes she were here. They decide to take a break from wedding stuff…..after they eat some cake.

Travis (Freddie Prinze Jr.) comes over, looking for Punky. Izzy (Quinn Copeland) screams for her, but says she isn’t home. Travis says he is having trouble with his girlfriend Emily and ends up taking some advice from Izzy while they watch a telenovela. She tells him they will be hugging on a veranda in no time.

Diego practices kissing on an orange, only to be caught by Daniel (Oliver De Los Santos), who makes fun of him. Hannah tells him it is never going to happen with Bree because she is dating someone named Austin who has a car. She goes to eat the kissing orange and is grossed out when she realizes it.

Punky and Cherie eat cake together, talking about how neither one of them did anything the old fashioned way. As they eat cake, one of the bakers says that they are a cute couple. They say they are not together and run when they are asked why they are eating free cake.

Izzy continues to watch her telenovela whe Bree comes over to see Diego. Hannah is upset, so she talks it out with Izzy, who relates it to the telenovela.

Travis comes over to ask Izzy for more relationship advice. She says they weren’t in a fight, but they are now. He wonders what she told her and she says it is his own fault for going to a seven year old for advice. They then continue to watch the telenovela together.

At dinner, Lauren and Cherie share their meals. Cherie is getting ready to propose when the couple at the next table get engaged, complete with the girl’s family coming from out of town, fireworks and the whole nine yards. Cherie changes her mind about proposing ans says Trent (the dude who proposed) is overcompensating for something.

Diego gets ready to hang out with Bree by doing his hair and borrowing cologne from Daniel.

Cherie tells Punky about the engagement not happening and wonders if it is a sign. Punky reminds her that she doesn’t believe in signs, but Cherie brings up hearing a breakup song on the radio and says that she keeps looking for them.

Punky tells her that she listened to her heart with Travis and reminds her of the gumball machine rings they had until they could afford real ones. She takes them out of her hope chest and puts on her wedding ring…..only it gets stuck. Cherie thinks it is a sign, but Punky denies it.

Diego comes home, yelling that love stinks. Cherie thinks this might be yet another sign. It turns out Bree dumped him and he is heartbroken.

Punky continues to convince Cherie that Lauren is the one when Lauren herself comes over. She tells Cherie they need to talk . She says Cherie is stubborn, eats her yogurt and has an irrational fear of refrigerators, but she loves her for sharing food, listening to her dreams and being the person she is. She asks Punky for her blessing and proposes. Cherie admits she was going to propose too, but Trent Kanye-d her moment. A violinist comes into the house and they seal their engagement with a kiss.

Later on, Punky gently tells Diego to bathe, but he says the cologne is a reminder of his heartbreak. Hannah is about to leave to go out with Bree when she finds out she used Diego to make him jealous. She is not happy about this, so when Bree arrives, she tells her she is hanging out with her brother instead. Izzy brings the point home by slamming the door in her face.

That night, Punky goes to Travis’s to get Diego’s shoe. They talk about Cherie’s engagement and she admits to putting on her wedding ring again. As he helps her take it off, he admits he and Emily broke up.

Punky and Travis reminisce about their life together and end up kissing. However, she leaves before they do something they will both regret. The episode ends with them leaning against the door and sighing.