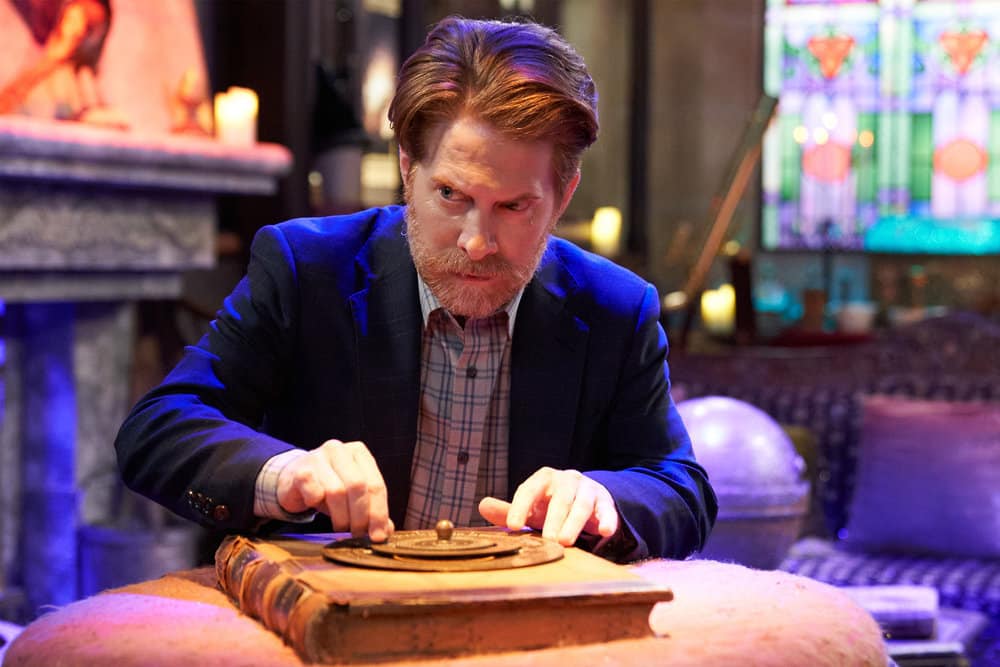 The episode opens with Punky (Soleil Moon Frye) playing poker with Hannah (Lauren Lindsey Donzis), Izzy, Daniel (Oliver De Los Santos) and Diego (Noah Cottrell). Izzy (Quinn Copeland) says she is the go fish champ at Fenster Hall and can read all of Punky’s faces. Punky begins to dance, which annoys the kids, so she stops.

Punky asks about their weekend plans because she heard Hannah has a date. Hannah doesn’t want to talk about it and is upset that Izzy squealed about it. However, she insists that it is a hang, not a date and leaves when Punky begins to ask questions.

Cherie (Cherie Johnson) and Punky talk about Hannah and how things were when they were her age and look over a pamphlet about hormones from Fenster Hall. Punky says she’s been there, done that and has the tattoo to prove it. She recalls Henry dealing with her dating and admits she has been talking to a guy online called EvanLovesDogs77. She says she wants sparks, so Cherie tells her to go for it.

Travis (Freddie Prinze Jr.) comes in, looking for his lyric book. Punky tells him that Hannah has a date and he says that he knows about it and it is more of a hang. She is upset he knows, but he reminds her he is the dad and cool parent. He says there is probably stuff he doesn’t know, so Punky says she has a date with Evan. He seems a bit surprised, but pretends to be happy since they are divorced and he has a girlfriend.

He goes into the kitchen, where Izzy is making an everything in the fridge sandwich. She offers to share, but he says he can just watch her explode. He tells her about his job writing a song for a musician, but can’t find his book. He jokes about it being in her sandwich.

Izzy offers to help him write a song by making one up on the spot about her sandwich. He is impressed.

Punky officially has a date with Evan and tells Hannah about it, as well as the pamphlet from Cherie. She is not impressed with either.

Later on, Izzy helps Hannah pick out an outfit for her date. They end up bonding over having Punky as a mom and dating advice, saying they are getting used to being sisters.

Punky gets ready for her date and tells the boys nobody will ever replace them. Diego wants to show her something before she leaves. She thinks it is dirt on Sean, but it turns out her own date Evan is a nerd who dresses as a wizard. Punky questions this and wonders which date makes her more nervous, hers or Hannah’s.

Hannah gets ready for her date, with her family complimenting her look. Daniel says they all look better than Diego.

Travis comes in, ready to babysit. Punky says it is not babysitting because he is their dad. He compliments Punky’s look, with Izzy wondering how he let that smoke show go.

Punky makes Hannah give her Sean’s real number (not the one to Jersey Mike’s), while Diego does another background check on Evan. She gives Travis some last minute instructions and leaves. Travis asks about Evan, and is made fun of because not only will Evan have a better night than Travis, but because he is eating ice cream out of the carton.

Diego continues his search, while Travis talks to Izzy about his lyric book, ice cream and Punky. This leads to them writing a song about ice cream together. Izzy comes to the conclusion that Punky is his rocky road.

Evan (Seth Green) and Punky are at a wine bar getting to know each other. However, she is distracted because she keeps texting Hannah. Evan is amused and says he is into his daughter’s life as well. They even have a YouTube channel where she makes fun of his clothes.

Meanwhile, Hannah is on her date with Sean (Conor Husting). She is annoyed because Punky keeps texting her. Sean says she should be glad her mom cares. They then discuss their plans of going to an escape room, which is code for being locked in a room together. While this is happening, they both get more texts from Punky. The waitress also takes a picture and texts her for proof of life. Hannah turns off her phone.

As for Punky’s date, she learns Evan loves dogs, but is allergic. The 77 represents how many times he had to use his EpiPen. He is also annoyed that Punky keeps texting Hannah. She also gets texts from Diego, who is doing a background check on Evan. She complains about this and he says she is doing the same thing. She texts Hannah ‘no more texts, I promise’ and they head off to…..the escape room.

Hannah and Sean end up at the escape room, where the worker (Kunsl Dudheker) explains how it works. However, he knows they are just going to make out in there. He is about to begin the adventure when Punky and Evan show up. Hannah is even more mortified that she is on a double date with her mom.

The guys enjoy the escape room, while the ladies talk things out and come to an understanding. They then join the guys. Punky ends up breaking up with Evan, while Hannah and Sean continue to enjoy each other’s company. Punky also gets hit on by the employee.

At home, Izzy and Travis work on the song. He says she is his mini muse and she says he can thank her on Venmo.

Diego can’t find anything online about Evan except that he bought a But First, Coffee mug on Esty. Travis asks what is going on, which leads to them talking about the divorce and Travis’s complicated relationship with Punky.