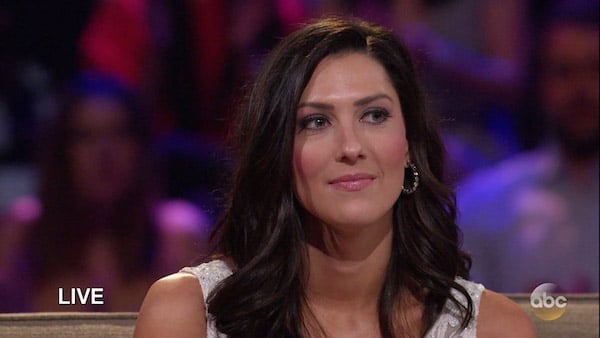 The Bachelor finale as seen on ABC. On Mondayâ€™s three-hour season finale, Arie Luyendyk Jr., 36, made his final choice between publicist Becca Kufrin, 27, and sales executive Lauren Burnham, 26 â€” but how he came to his decision was unlike anything weâ€™ve seen before. Featuring: Arie Luyendyk Jr, Becca Kufrin Where: United States When: 06 Mar 2018 Credit: Supplied by WENN.com **WENN does not claim any ownership including but not limited to Copyright, License in attached material. Fees charged by WENN are for WENN's services only, do not, nor are they intended to, convey to the user any ownership of Copyright, License in material. By publishing this material you expressly agree to indemnify, to hold WENN, its directors, shareholders, employees harmless from any loss, claims, damages, demands, expenses (including legal fees), any causes of action, allegation against WENN arising out of, connected in any way with publication of the material.**

Another Bachelor Nation couple bites the dust. Becca Kufrin and Garrett Yrigoyen, who met on the show in 2018, have called it quits, TVGrapevine has learned. E! News was the first to break the story.

Rumors of a breakup began earlier this summer due to some controversial social media posts Garrett posted in wake of the Black Lives Matter movement. At the time, Becca tried to defend him on her podcast with fellow Bachelorette Rachel Lindsay, but soon changed her tune, saying that she is not sure where they stand at this point.

“For those who are curious about my relationship with Garrett at this point, all I can say right now is that I don’t know,” she shared during an episode of Bachelor Happy Hour. “I can’t give anything more than that. It’s something that we are trying to work through and discuss and do work on at home at this time and that’s where the work will remain and that’s really the best I can give you at this point.”