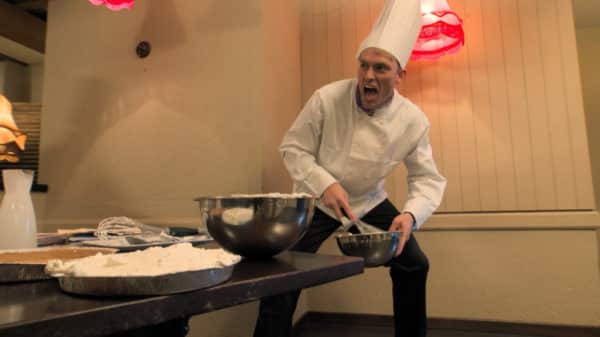 ÒYou DonÕt Strike Me as a Renaissance ManÓ Ð Teams are in Paris, France where they must whip up some tasty treats and make enough Crme Chantilly for four pies, as well as compete in a series of carnival games, on THE AMAZING RACE, Wednesday, Nov. 11 (8:00-19:00 PM, ET/PT) on the CBS Television Network. Phil Keoghan is the host. Pictured: Will Jardell Photo: Screen Grab/CBS ©2020 CBS Broadcasting, Inc. All Rights Reserved

Tonight’s episode of CBS’s The Amazing Race takes the remaining pairs to Paris, France. This episode allows them to drive on their own, but since they must drive stick shift, it will prove to be a challenge for some.

There are two flights fifteen minutes apart, dividing the teams as they travel. The first flight consists of Leo and Alana, Michelle and Victoria, Will and James, and Riley and Maddison. Kaylynn and Haley, DeAngelo and Gary, Hung and Chee, and Eswar and Aparna are on the second flight.

Once they land, they must head to Domaine de Chantilly. Will struggles driving, giving Riley and Maddison the lead. Leo finally helps Will (despite finding him annoying), but mostly to get him out of the way. The other teams drive past and Will is finally able to leave.

The second flight lands and everyone else heads to the destination.

Roadblock! The teams must match paintings to people dressed as people in said paintings. Riley has no problem with this, so he and Maddison head to the next task of making Chantilly cream for pies. Once they are done, they deliver the pies, which get thrown. Before they head to Musée des Artes Forains, Riley and Maddison warn the others about the pie throwing.

One by one, the other teams arrive and perform the roadblock. However, Michelle and Victoria are lost and try to get directions, causing them to fall farther behind. Kayleynn and Haley are also lost and stuck in traffic. However, it is worse for them since they also have to do the speed bump.

There is a second Roadblock. This one has them playing three different carnival games to get the next clue. Maddison does it this time, but since she is struggling, Riley gets annoyed. However, they finish first and head to the pit stop at Pont des Arts as more teams arrive to do the second Roadblock.

As the other teams continue to do the Roadblocks, Kaylynn and Haley also do the Speed Bump, which has them cleaning horse gear. Once they are done, they rush to complete the Roadblocks to avoid being eliminated.

Michelle and Victoria get lost and end up falling further behind with other couples passing them by.

One by one, the teams arrive at the Pit Stop.

Riley and Maddison are team 1 and win a trip to Vietnam.

Hung and Chee are team 2.

Leo and Alana are team 3.

Will and James are team 4.

DeAngelo and Gary are team 5.

Eswar and Aparna are team 6.

Michelle and Victoria are team 8 and eliminated.