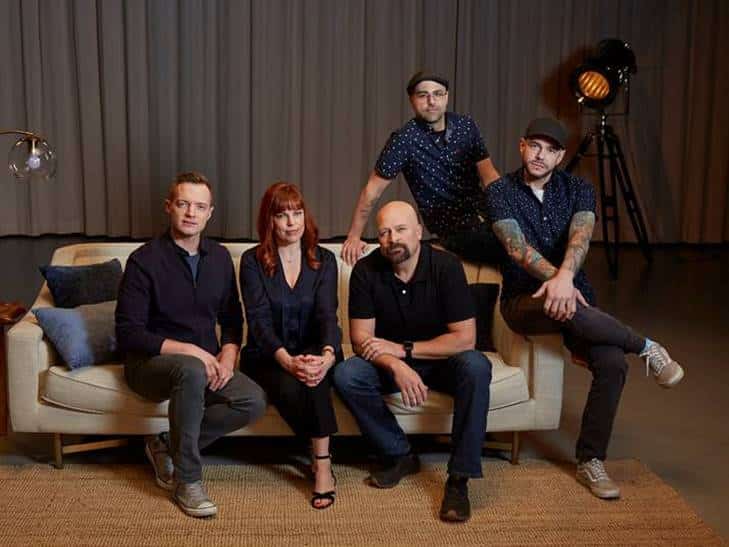 This might just be the year to buy lots of extra candy and settle in for “Ghostober,” Travel Channel’s third annual paranormal programming event. No need to leave the house when Halloween reigns all month long, taking viewers on spine-chilling adventures to the other side – where tales of poltergeists, ghostly creatures, demons and even a few legends will keep you company. Filled with a creepy mix of buzzy new specials, boldfaced names and returning favorites, “Ghostober” has all the thrills and chills on lockdown.

While we are all living with many unknowns, Travel Channel conjures up over-the-top specials exploring the very topic of the real unknown. While paranormal programming is scheduled throughout October, Ghostober culminates with “7 Nights of Fright.” The top 20 of the world’s spookiest unexplained videos kickstarts the week on Sunday, October 25 at 9 p.m. ET/PT, with the two-hour countdown “Paranormal Caught on Camera: Top 100.” Included in this week’s lineup of supersized specials are new Shock Docs focusing on two of our nation’s most terrifying tales of horror – “Amityville Horror House,” premiering on Monday, October 26 at 9 p.m. ET/PT and “The Exorcism of Roland Doe,” premiering on Tuesday, October 27 at 9 p.m. ET/PT. Then, fans will celebrate the season with many of Travel Channel’s talent featured in the new “Shock Docs” tell-all holiday special, “This is Halloween,” premiering Wednesday, October 28 at 9 p.m. ET/PT.

As the calendar creeps closer to All Hallows’ Eve, we crank up the terror with over-the-top tricks and treats. In the two-hour special, “Ghost Adventures: Horror at Joe Exotic Zoo,” premiering Thursday, October 29 at 9 p.m. ET/PT, Zak Bagans and the “Ghost Adventures” crew go inside the infamous Greater Wynnewood Exotic Animal Park to investigate sinister accounts of ghostly activity. The special is then followed by the Season Two return of “The Holzer Files,” reopening famed ghost hunter Hans Holzer’s original case files, at 11 p.m. ET/PT.

The goosebumps continue with a sneak peek of the new season of “Portals to Hell,” starring Katrina Weidman and Jack Osbourne, on Friday, October 30 at 8 p.m. ET/PT. The duo investigates what might just be the most haunted place in all of Connecticut. And then, in a special two-hour holiday treat, the whole Osbourne family joins in on the fun. Adamant on truly living up to their position as America’s first family of darkness, Jack Osbourne takes Ozzy, Sharon and Kelly on their first-ever paranormal investigation in “The Osbournes: Night of Terror,” premiering at 9 p.m. ET/PT. Not only are they going to hunt ghosts together … but they’re going to love it.

Travel Channel wraps up “Ghostober” on Halloween night with the ultimate series crossover featuring superstar paranormal investigators from two of the network’s hit shows, “Ghost Nation” and “Kindred Spirits.” The ghost-hunting teams reunite for the first time in nearly a decade to explore frightening activity inside an illustrious Newport, Rhode Island, mansion in “Ghost Nation: Reunion in Hell,” premiering Saturday, October 31 at 8 p.m. ET/PT. And the programming event bows with a chilling new episode of “Destination Fear” on Saturday, October 31 at 10 p.m. ET/PT, where the team will spend a terrifying night inside the abandoned Old Crow Distillery in Frankfort, Kentucky.

“Halloween is Travel Channel’s Superbowl, and with more people at home than ever before, we plan to deliver an over-the-top slate of original programming. We are the only network super-serving this mega popular genre to its superfans, featuring the superstars of the paranormal field and beyond,” said Matthew Butler, general manager, Travel Channel.

The “Ghostober” 2020 celebration is back on TravelChannel.com and Travel Channel’s Facebook, Twitter and Instagram pages. Fans can check out exclusive content from their favorite shows, a new exclusive web series, “Up Close & Paranormal,” with the cast of “Ghost Nation” and “Kindred Spirits,” behind-the-scene videos, cast interviews, photos and more. Viewers can also stream a variety of Travel Channel’s series, including past seasons of “Ghost Adventures,” on the Travel Channel Go app.

Included in this year’s Halloween lineup are some of the wildest, zaniest and scariest specials and series:

In 1977, the book, “The Amityville Horror,” was published and caused a sensation. The subsequent 1979 film adaptation was a surprise box office hit. Today, it is the quintessential American horror story based on true events – family moves into their dream house in an all-American town and experiences the most terrifying demonic haunting imaginable. Demon possession, demon attacks, a portal to hell – it was a situation so dire, even the church couldn’t help them. Through archival footage and re-creations, our film presents the harrowing true story of Ronald DeFeo, who murdering his entire family in the Amityville house, and the 28 days the Lutz family lived there. A rare, archival interview with George Lutz, describing the final, terrifying night in the Amityville house, is revealed for the first time. #AmityvilleHorrorHouseTrvl

In 1973, “The Exorcist” shocked moviegoers. Overnight, the sinister presence of satanic evil seemed frighteningly real for millions of Americans. Archival footage shows audience members frightened out of their wits – and literally out of their seats. Some in the audience ran out of the theatre; others got physically ill or couldn’t sleep for weeks. Through rare archival footage, this shock doc will feature the cultural impact of the horror movie and explore the story of Roland Doe, the chilling true story behind “The Exorcist.” And for the first time on television, an investigator will expose a shocking secret and possible cover-up in the real-life exorcist case of Roland Doe. #ExorcismofRolandDoeTrvl

Halloween is a time to indulge our darkest fears and live out our wildest fantasies. For those who like the spooky side of life, it’s become a yearly event. In the two-hour Shock Docs installment, “This is Halloween,” Travel Channel’s paranormal experts share their best Halloween stories in a nostalgic look back at everyone’s favorite haunted holiday. From creepy costumes to the scariest pranks they’ve ever pulled, it’s a sweet and spooky trip down memory lane. #ThisisHalloweenTrvl

The dramatic saga of Joe Exotic and his Wynnewood, Oklahoma, zoo captivated audiences and became a global phenomenon. Now, Zak Bagans and the “Ghost Adventures” crew are once again breaking new ground with the first-ever paranormal investigation inside Joe Exotic’s Greater Wynnewood Animal Park. For years, the park staff have claimed the zoo is haunted. In this two-hour special, “Ghost Adventures: Horror at Joe Exotic Zoo,” the team examines claims of sinister activity and tortured spirits believed to lurk in the shadows of a park tainted by tragic events like deadly fires and accidental shootings. Could these incidents have opened a mysterious portal to the other side? The team is prepared to confront these dark spirits as they attempt to gather evidence as to who, or what, is haunting this park. #GhostAdventures

In the new special “The Osbournes: Night of Terror,” the Osbourne family – Jack, Kelly, Ozzy and Sharon – are going on their first-ever paranormal investigation together! The First Family of Darkness are in for real chills with a ghost hunt inside Los Angeles’ historical Heritage Square, a collection of horrifying, active haunted houses believed to be the most haunted hotspot in the area and never before been investigated for TV. As Jack and Kelly go deep into the night to investigate prolific spirit activity, Ozzy and Sharon monitor the action from basecamp. Terrifying encounters aside – of which there are plenty – in true Osbourne fashion, there’s a never a dull moment. With Kelly and Jack on the front lines of the investigation confronting unexplained disturbances, skeptics Ozzy and Sharon provide lively feedback and guidance hoping to mitigate the paranormal danger their kids are sure to face. It’s a family fright night like no other. Not only are they going to hunt ghosts together…but they’re going to love it. #OsbournesNightOfTerror

In this spine-tingling, two-hour Halloween special, “Ghost Nation” stars Jason Hawes, Steve Gonsalves and Dave Tango are calling in their old paranormal pals, Amy Bruni and Adam Berry of “Kindred Spirits,” to reopen a case that has taken a sinister turn. Seaview Terrace is the 40,000-square-foot Rhode Island mansion famous for being featured on the TV show “Dark Shadows,” but the owners were shocked to find out that a recent visitor – a self-proclaimed warlock – had performed some sort of blasphemous ceremony in the house. Now, they’re experiencing a shift in the mansion’s energy, unleashing something more menacing. The team scours 100 years of history to discover a notoriously patchwork past, filled with lavish high society parties and possibly a scandalous murder. #GhostNation and #KindredSpirits

Jason Hawes, Steve Gonsalves and Dave Tango are back for more adventures to the other side in all new episodes of “Ghost Nation.” The locations have bigger mysteries, are more chilling and have never been investigated on television. And they are calling in an old friend for some help – paranormal investigator Shari DeBenedetti. With the help of their local contacts, they embed themselves in the community, conducting multi-day investigations in an effort to track down the true source of hauntings and restore peace to the living. They’ll do whatever it takes to entice the ghost into telling its story and stop at nothing to get to the bottom of the paranormal phenomena. (Two-hour Halloween special and 13 one-hour episodes) #GhostNation

Buckle up for more fright-fueled episodes of “Destination Fear” – a haunted road trip turned terrifying sleepover. Brother and sister duo, Dakota Laden and Chelsea Laden, and best friend Tanner Wiseman, along with camera operator Alex Schroeder, confront their fears, as they pile into their RV and hit the road on a nail-biting cross-country journey to pursue paranormal evidence, spending the night inside America’s most haunted abandoned buildings. Lured by the unknown and with a greater understanding of fear, the crew explores a whole new set of abandoned locations with grim histories – this time the destinations remain a surprise, not just to Chelsea and Tanner, but to Dakota as well. In the premiere episode, Dakota leads Chelsea, Tanner and Alex to Saratoga County Homestead Hospital, a decaying sanitarium in upstate New York, where some patient corpses were unclaimed due to a flu pandemic. Screams and darting shadows play mind games with the team as they struggle to pin the activity on the living or the dead. (Seven one-hour episodes)

Paranormal investigators Zak Bagans, Aaron Goodwin, Jay Wasley and Billy Tolley open up to viewers as they’ve never done before in “Ghost Adventures: Screaming Room.” The guys are kicking back in their screening room to watch their favorite episodes of the hit series and get candid with fans – and each other – about their craziest experiences over the past decade. Away from the haunted locations we usually see them in, with no equipment or investigations, the crew relives some of the most terrifying, shocking and even comedic moments from their career, as they re-watch their most memorable investigations with never-before-heard stories from the moments that created a legacy. (One-hour episodes) #GhostAdventures

Tags: travel channel what to watch