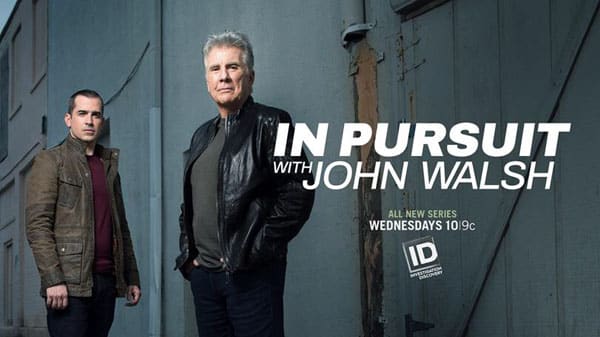 In the season 2 finale of Investigation Discovery’s IN PURSUIT WITH JOHN WALSH, airing on Wednesday, April 1 at 10/9c, Callahan Walsh heads toDelphi, Indiana, where two families and a small town have been ripped apart by a mysterious killer. When the bodies of 13-year-old Abby Williams and 14-year-old Libby German are discovered near a hiking trail just a day after they’d been reported missing, their small town of 3,000 residents is thrust into the national spotlight as police begin a massive search for their killer. Video and audio recordings of a man believed to be the perpetrator increases the media frenzy surrounding the case. Despite thousands of tips, there have been no arrests in the case, and their killer remains unknown and at large. John and Callahan Walsh are calling on viewers of IN PURSUIT to call in anonymous tips and leads, which will be vetted by the appropriate authorities to help bring a killer to justice.

The finale also profiles California fugitive Francisco “Frank” Contreras, and spotlights fugitives Steven Todd from Indiana and Javiar Oropresa from Illinois in its “15 Seconds of Shame” segment. The series also works with the National Center for Missing & Exploited Children to shine a national spotlight on two missing children, with the finale featuring Osciel Rico from New Mexico and newborn Andrew Caballeiro from Florida.