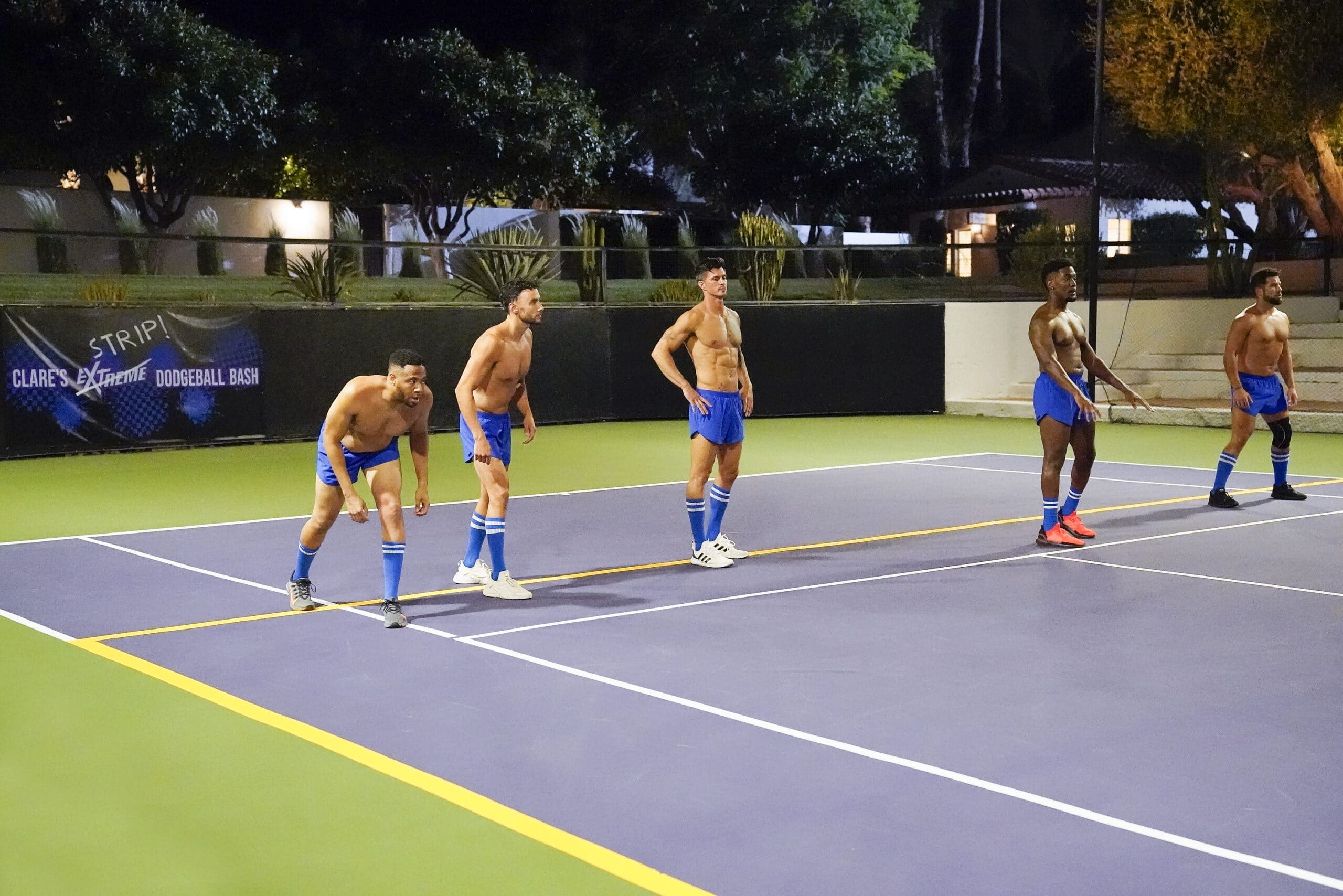 THE BACHELORETTE - "1602" - Clare left no doubt the first night that she knew what she was looking for and let the men know it! Nine eager suitors get the opportunity to impress Clare as they learn how to communicate through the languages of love. Jason is the lucky bachelor to go on the first one-on-one date, but will he reveal some dark secrets from his youth and still be able to gain Clare's acceptance? Then things turn really intense when 10 men show off something totally different - competing in a revealing game of dodgeball. Clare's explosive moment with one suitor leads to an immediate reaction. Another bachelor, uncomfortable with the dodgeball competition, plans to confront Clare about her behavior as the drama is ratcheted up from the very start of her journey on "The Bachelorette," TUESDAY, OCT. 20 (8:00-10:01 p.m. EDT), on ABC. (ABC/Craig Sjodin) GARIN, BRENDAN, KENNY, DEMAR, BLAKE MOYNES

Tonight is the second episode of ABC’s The Bachelorette. Clare Crawley’s journey will continue with her remaining men. We get a recap of last week’s episode and then see the guys talk to Chris Harrison. After they fawn over how wonderful Clare is, we get down to business.

Riley, Jordan, Yosef, Ivan, Ben, Bennett, Zac C, Zach J and Dale are on this date. The clue is ‘I am looking for a guy who speaks to my heart.’ The guys meet up with Clare and Chris to learn about love languages.

It begins with each guy sharing how they feel about being on this journey and what they want out of the experience….as well as their feelings for Clare.

The guys then get gifts for Clare….from their luggage? Did they just choose random crap they found? Okay, the chess piece and the baseball were cute. However, I would feel so pressured to find something on the spot and being unprepared. I would only really have my clothes, toiletries and maybe my favorite hair tie? I would epically fail this one!

Then we get into the touching….she has to guess which guy is which while blindfolded. It is really creepy, but she ends up correctly guessing most, including Dale, because of course she does.

The mingling part of the date begins just fine, but the guys seem more into each other. She does spend a bit of time with Bennett, but cannot let it go, so she yells at the guys for not wanting to spend time with her. Dale says that is not his intention, while Yosef thinks she is crazy for thinking that. He tries to speak for the group, but it does NOT go over well.

She spends time with Dale and she lets him know she is scared of where things are going with them. He says he feels the same way and he cares about her. They make out and he sees himself falling in love with her.

She also bonds with Zac C and tells him about her abusive relationship. She sees there are more guys to notice and get to know other than Dale.

She also dances with and kisses Riley. She feels better and apologizes to the guys.

Riley gets the group rose, while Yosef broods and thinks Clare may not be who he thinks she is after all.

Jason gets the one on one date with the clue ‘love will set us free.’ He also has to write a letter to his younger self and Clare does the same. She tells him she wanted this date for him and that they are going to learn how to let it go by screaming.

They then get into things they were told in the past that hurt them and how they used to believe it….and now they are going to let it go by shattering rocks. I think this may be the best date the show has ever had. It gets even better when they read the letters and they have a deep conversation about feelings and demons. It is so beautiful seeing them open up and get so emotional.

He gets a rose and they seal it with a kiss.

She then burns her finale dress from Juan Pablo’s season!

The second group date (which we never got who was on it, I assume it is the rest of the guys?) has to do with balls. It turns out they are playing dodgeball, which makes the guys very happy. They are divided into teams and the winners will get more time with Clare, while the losers will do the walk of shame home.

There is the red team and the blue team, who call themselves Blue Balls. Because of course they do. The guys also joke about balls flying at their faces. (so there goes their social lives?)

The twist is that they will be stripping when the other team scores. The blue team loses miserably, so they are sent home in their barely there skivvies. When they get back,. the other guys are so confused and grossed out. It reminds me of the Tuesday the 17th Psych episode when they played strip poker.

Clare mingles with the guys on the red team. She gets a foot rub from Eazy and loves how attentive they all are being. It allows her to open up more and let her guard down.

Blake Moynes is upset because he was sent back after the date and didn’t get much time with her. He goes to crash the date and talk to her, which upsets the guys. They even take it as far as to interrupt their time, making even more drama.

Clare sends the guys away so she can finish talking to Blake. She tells him she appreciates him coming, but she doesn’t want to disrespect the other guys. They hug and he goes back to the resort.

Clare continues to talk with other guys, including Brandon, who seems to keep putting his foot in his mouth. She thinks he is more into her looks, but he keeps trying to explain himself, but he ends up getting himself sent home.

She tells the guys she is looking for a relationship with substance and gives Chasen the rose. Eazy is not happy about it at all.

However, she talks to Blake Moynes first….to give him a rose and put his mind at ease.

She ends up making out with Dale and we will have to find out next week what happens next. Stay tuned.