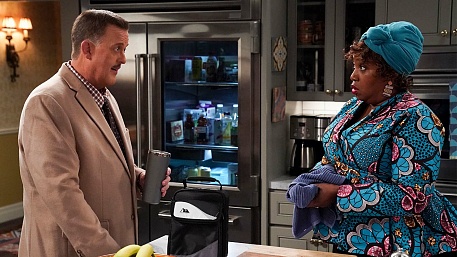 ICYMI: Bob Hearts Abishola Recap for Your Beans Are Flatlining

This week’s episode opens with Ebun shaming Abishola for her low MCAT scores. Bob tries to intervene, but no avail. Abishola feels bad and storms off, but Ebun won’t let up on her.

Bob goes to check on Abishola, who is upset because she thinks she won’t get into Johns Hopkins. He reminds her that there are plenty of other good schools, but she says this is her only choice and that they will be moving to Baltimore, like it or not! This leads to an argument, which is overheard by Ebun and Dottie. They listen in and snark away about the fight and how they are good wives.

The next day, Abishola has lunch with Kemi and Gloria, where they talk about her issue with her mom. She admits she is becoming a doctor to please her mom, but Gloria thinks it should be to help others.

At MaxDot, Kofo, Douglas, Goodwin, Dottie and Bob are all in a meeting. Kofo suggests selling their product in airports. Bob hates the idea and lashes out, but everyone else thinks it is a good idea. As Bob storms out, Douglas wonders what is going on.

That night, Abishola is studying when Ebun comes in, asking if she started dinner for Bob. She admits she was studying, but can just order takeout. Ebun yells at her for this and says she can cook and study at the same time.She adds that if Abishola keeps it up, she will be twice divorced and not a doctor.

Later on, Abishola has a nightmare about balancing it all. When she wakes up, she talks to Bob, only to have Ebun yell at her for dreaming. She wakes up for real and is completely terrified.

The next day, Ebun is in the kitchen cooking when Bob comes in. She says she will be cooking for him and making sure he has three meals a day. However, he thinks she is overstepping and they get into an argument.

Dele goes into Abishola’s room to study because the grandmas are talking about food and gas. The two bond over their hatred of biochemistry and talk about his hopes and dreams. He wants to pursue dance or law if the does not become a doctor, but she is not happy with this idea and says this is why she makes his decisions for him.

Bob talks to Goodwin about his issues with Abishola, leading to a bonding moment.

At home, Abishola talks to Dottie about her issues about becoming a doctor. She stands up and shows her how Abishola helped her grow, saying she can twerk as well.

Abishola shares the news with Bob and they end up talking about their future plans. She decides to retake the MCAT and that they will talk about everything else later. He wants to send Ebun back to Nigeria and she agrees it is a good plan.

The episode ends with Abishola dreaming about making her mom finally be quiet.