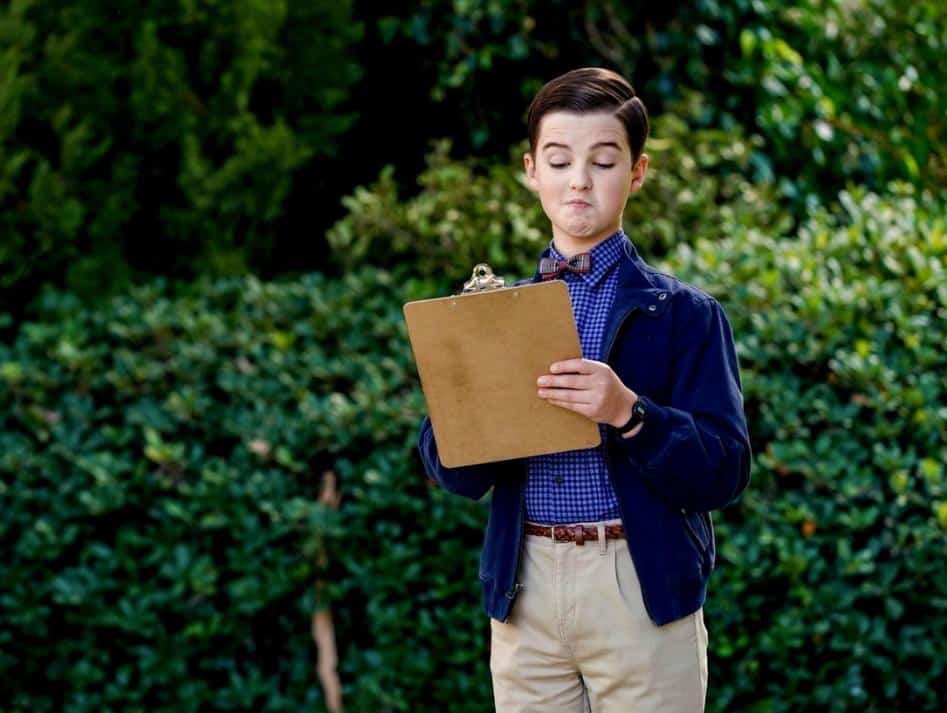 ICYMI: Young Sheldon Recap for The Grand Chancellor and a Den of Sin

This week’s Young Sheldon opens with Sheldon looking back at court cases and trying to spy on Dr. Linkletter to find out what is happening at the university. After a few spying sessions, Dr. Linkletter fills him in, saying that there will be changes in the science department.

Sheldon is upset that non-science majors only need one science elective, but Dr. Linkletter assures him things will be fine.

Georgie goes into the kitchen, where Mary is clipping coupons. She asks him why he isn’t at work and it turns out he is working nights that week. He says the idea came because people work during the day, so she offers to put an ad in the church bulletin advertising for him and MeeMaw.

Sheldon talks to President Hagemeyer about the science change, but she says there is nothing she can do, despite being the school president. However, she is going to keep trying, with his help.

At church, Mary and Peg are working at the church when Peg spills the beans about MeeMaw’s secret gambling room.

This leads to Mary storming over to MeeMaw’s house in order to yell at her and get answers. MeeMaw tells her everything, but Mary only gets even angrier, especially since Georgie is involved.

President Hagemeyer and Sheldon learn their initial plan to get sciences back into the school failed, but are not willing to give up. She suggests Sheldon talk to students about it, but he thinks it could take months to complete.

George is watching Jeopardy when Missy walks in, wanting to know why. He tells her he likes to learn, but it turns out the remote is out of batteries. She offers to get some, and he also requests a beer.

As Missy is getting the requested items, Mary comes home, angry over what she learned from MeeMaw. Missy thinks it is cool, but Mary sends her to her room. George thinks it is all okay and says Georgie is going to to what he wants….and even has girls over. Mary notices Missy listening in and tells her to shut her door….all the way.

Sheldon continues to talk to students, but doesn’t have much luck. He finally gets a girl willing to sign it, but only if he signs her save the jazz band. However, he tells her to pretend they never met.

He finally writes an editorial for the school paper and turns it in to the editor.

Mary tries to get Georgie to quit his job, but he refuses, even when she threatens him with what Jesus thinks. They end up fighting and she storms out.

Sheldon goes to find his article, only to find out it was not published….and that President Hagemeyer lied about having a boss. He goes to confront her. But she says she did it because she knew he would be a pain in the ass about the science thing. He begins to throw a tantrum and mess up her desk, which only leaves her confused.

Pastor Jeff comes in to talk to Mary about why one of the ads is missing, leading to them having a heart to heart.

Later on, Sheldon talks to George about what happened, leading to them having their own heart to heart about lying. Sheldon then finds lies in everything from Star Trek to cereal to wrestling. He goes to talk to Mary, who is praying outside. The two of them have their own talk about lying and she helps him see that not everyone lies and that he should remain honest. They bond and he reveals that she never lied to him….as she cries.

The episode ends with George gambling and President getting a call from Stephen Hawking about the science requirements.