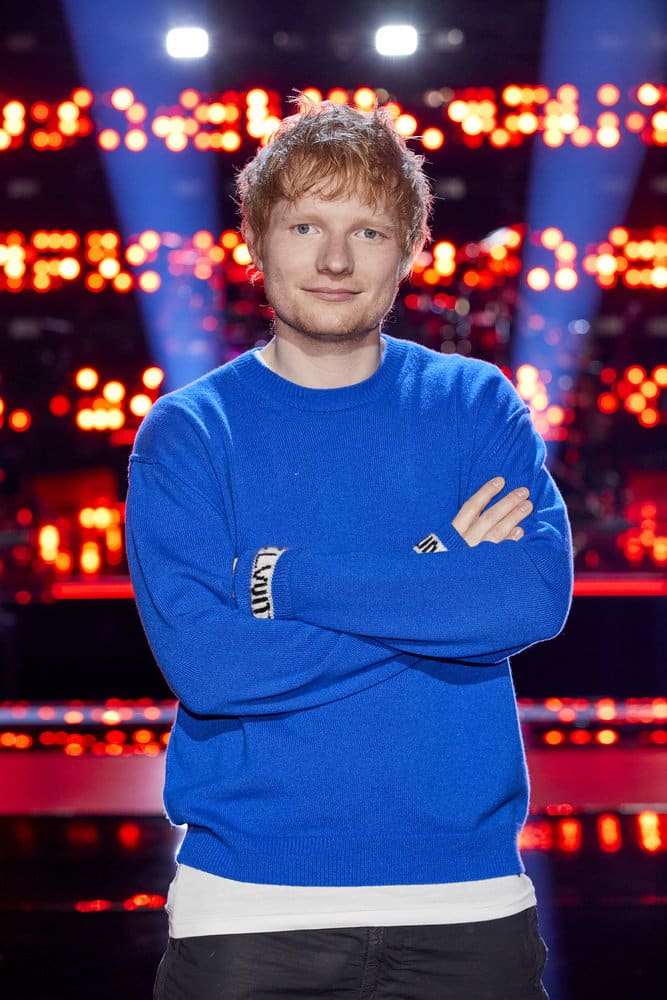 Alongside superstar coaches Kelly Clarkson, Ariana Grande, John Legend and Blake Shelton, Ed Sheeran mentors the remaining artists who have made it through the Battle Rounds, as each team prepares for the Knockouts, beginning Monday, Oct. 25 (8-10 p.m. ET/PT).

During the Knockout Rounds, artists are paired against a teammate once more, but select their own song to perform individually while their direct competitor watches and waits. Utilizing his vast experience in songwriting, musical production and performing to provide multi-faceted mentorship, Sheeran will guide the artists in their vocal and technical choices and tailor the artists’ songs to their strengths to bolster each performance. Coaches alone choose the winner from their team to advance to the Live Playoffs. Each coach has one steal in the Knockouts.

As an era-defining artist, Sheeran has seen record-breaking sales across his recorded music and live performances, garnering a plethora of award wins behind some of the biggest songs in history. A four-time Grammy Award winner, he has resonated with fans across the world for his peerless songcraft and exceptional music palate. With four multi-platinum, critically acclaimed albums under his belt, Sheeran has amassed more than 60 billion streams and sold more than 50 million albums globally to date. He is also one of only six artists to have three songs earn RIAA Diamond-certification and his most recent world tour made history as the most-attended, highest-grossing tour of all time. Sheeran’s latest studio album “=” – featuring the chart-topping lead single “Bad Habits” and its recently released follow-up “Shivers” – is set to arrive everywhere on Oct. 29.

“The Voice” is a presentation of MGM Television, Warner Bros. Unscripted Television in association with Warner Horizon, and ITV Studios The Voice USA, Inc. The series was created by John de Mol, who serves as an executive producer along with Mark Burnett, Audrey Morrissey, Amanda Zucker, Kyra Thompson and Adam H. Sher.