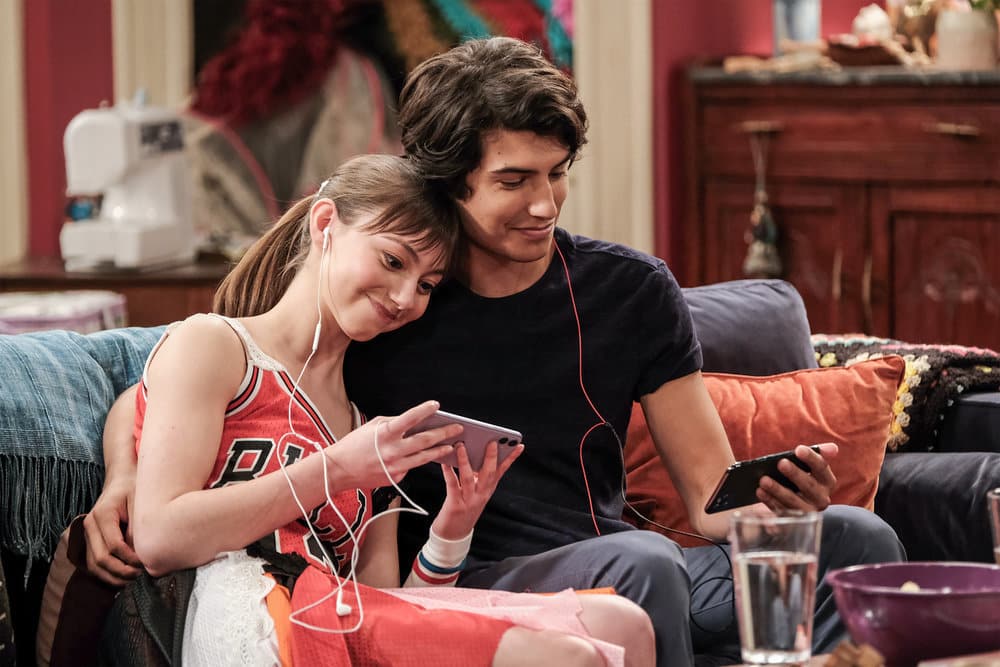 ICYMI: Punky Brewster Recap for Under The Influence

The episode opens with Punky (Soleil Moon Frye) taking pictures of Izzy (Quinn Copeland), Daniel (Oliver De Los Santos) and Diego (Noah Cottrell). The boys are not amused, but Izzy is having fun with it. Punky says she is practicing for taking photos of Chance the Rapper. She begins singing one of his songs, but it annoys the kids.

Punky continues to take pictures of Brandy the dog when Izzy breaks one of the lenses. She asks if it was expensive. Punky tells her to be more careful, leading to her to put herself in a time out. Since she overreacted, Punky also gives herself a time out.

Hannah (Lauren Lindsey Donzis) comes in on a skateboard because it is something her boyfriend Sean likes. Punky asks her about her Fashion Show design, which Hannah thinks is almost done. However, it is far from being done because she is more into her boyfriend and impressing him with skateboarding.

Cherie (Cherie Johnson) comes over with sage sticks for Punky. They discuss how Cherie’s girlfriend Lauren loves them, but she is not into them, but accepts Lauren for her. Hannah comes in with her boyfriend’s jersey, which she says she loves, even though Punky knows she is lying. Punky asks Cherie to talk to her, but Cherie reminds her that Hannah is fifteen and crushing on a boy, so this is normal. Hannah is happy with this, but Punky doesn’t get it and wonders if there is a return policy on kids.

Izzy overhears the last part of the conversation and goes to Diego and Daniel for help. Daniel tells her to do extra chores, while Diego says he just uses his charm. Izzy plans to do this, but is still scared of being sent back to Fenster Hall.

Travis (Freddie Prinze Jr.) is in the kitchen with Diego playing soccer. Punky warns them about playing soccer in the house, but then scores a goal. She tells Diego to shower, but he says Travis doesn’t enforce showers. This leads to the adults debating over their parenting styles. Punky then brings up Hannah, but Travis agrees this is normal for a teenage girl. He then reminds her of his influence on her and how it led to Hannah.

Punky is still not satisfied and joins Hannah and Sean (Conor Husting) in the living room, where they are watching a horror movie. Hannah is uncomfortable with the movie and becomes more embarrassed when Punky begins questioning Sean about his life.

Izzy keeps cleaning the house. Travis asks her what she is doing and gives her a double juice box. She asks why Punky got rid of him and he explains the divorce. She says she is worried about being thrown out , but Travis assures her that things will be fine.

Diego and Daniel think Izzy is going overboard on cleaning, especially since Daniel just told her that so she would clean up after Diego. At that moment, Punky comes in with laundry, which Izzy volunteers to put away. They then begin talking about Hannah, who Punky says is not her little girl anymore. Izzy thinks this means she got rid of her and gets even more agitated. Punky continues to talk about Hannah, showing Izzy the music box she gave Hannah as a kid. She looks in it and finds a joint.

Travis and Punky discuss the joint, however, Travis doesn’t think it is a big deal. He says he did pot as a teen as well. They wonder if they should talk to Hannah about it, bit then agree to interrogate Sean instead.

Sean comes over and he thinks this is about Punky’s crush on him. Punky is horrified, but Travis finds it kind of funny. They bring up the joint, but Sean says that he has severe asthma. Travis says there are edibles. Punky reminds them they are parents.

They tell Sean that Hannah changed for him, which upsets him. He talks to Hannah about it, leading to them breaking up. She is confused and says she did a lot for him, even pretending to like skateboarding. Travis brings up the joint and it comes out that Hannah found it among Travis’s things. He says it was a leftover one from awhile ago and no longer smokes.

The three of them talk things out and Hannah goes to talk to Sean. Travis goes to flush the joint down the toilet.

Izzy walks in with laundry she accidentally shrank and confesses her fear of being sent back. Punky assures her she is not going anywhere and they hug it out.

Travis comes back into the room to say the joint is missing. It turns out Daniel and Diego mistook it for a sage stick to cleanse their room. Punky says to open the windows and not breathe.

The episode ends with Hannah wearing a dress she made out of Sean’s jersey and the two of them watching a movie while on their phones.