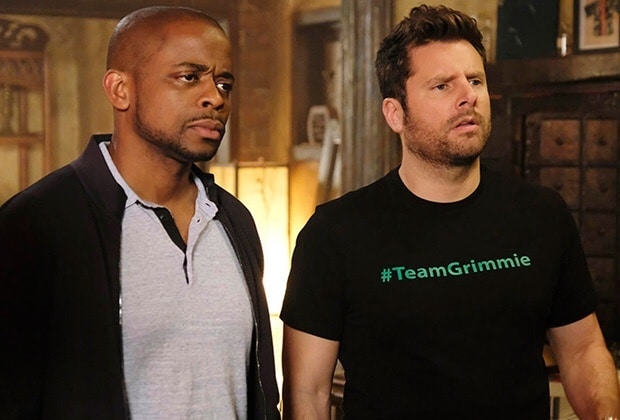 0
Read Time:1 Minute, 10 Second
James Roday and Dulé Hill Announce All Eight Seasons to Air Weekly on USA —
Hey, Psych-o’s! In our greatest time of need, your favorite heroic duo — fake psychic detective Shawn Spencer (James Roday) and his best friend, Burton “Gus” Guster (Dulé Hill) — announced today via Roday and Hill’s Twitter that they’re returning to your airwaves… so get ready for a few PSYCH all-nighters, beginning in just one week!
The biggest PSYCH marathon in USA Network history –a super-sized Psychtacular binge-a-thon of all eight seasons (120 episodes!) – will air weekly this April. Seasons 1 and 2 will air nonstop from Wednesday, April 8 at 10PM ET through Friday, April 10 at 5AM ET; and the following week, we’ll do it all again, with Seasons 3 and 4 airing Thursday, April 16 at 6AM ET through Friday, April 17 at 2PM ET. (See link below for additional season schedules.) In addition, stars Roday, Hill, Maggie Lawson, Kirsten Nelson, Corbin Bernsen and Tim Omundson will be highlighted on-air all month long, as they share their favorite PSYCH moments and memories.
PSYCH aired for eight seasons on USA Network, from 2006 to 2014. During its final season, PSYCHwas cable’s #1 original series in its timeslot among P18-49, P25-54 and P18-34, averaging over 3 million viewers P2+.* Over the series’ full run (2006-2014), PSYCH averaged 4.5 million viewers (P2+).**
Facebook
Twitter
Pinterest
LinkedIn