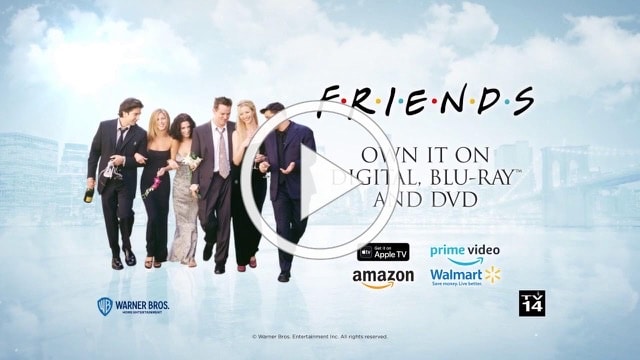 0
Read Time:2 Minute, 0 Second
On September 22, 1994 the first episode of Friends aired on NBC, and since then the series, characters and its infamous taglines have become a global phenomenon. After 236 episodes and its ten season run on-air, the beloved series went into syndication episodes on a number of networks, and in 2015 Netflix acquired the exclusive rights to stream the series; eventually becoming one of most watched shows on the platform, until the close of 2019!
So where have your “Friends” been, now that its 2020? According to Ross, “We Were On A BREAK!” from streaming – but have no fear, you can still get all of your favorite episodes on Digital, Blu-ray and DVD today!
For both fans and newcomers that want to buy the series to digitally stream forever – the complete series, individual seasons and compilation sets are available to purchase here: www.OwnFriendsTV.com. All seasons are also available to own at all major digital retailers; including iTunes, VUDU, Amazon Prime, and Google.
If you feel like splurging – there is something to be said for physically owning a hard copy of your favorite TV show! You can purchase the DVD or Blu-ray sets from all major retailers – including Walmart, Target, and Amazon. If you purchase the digitally remastered Blu-ray Complete Series set – you will get over 110 hours of content – including all 236 original broadcast episodes, plus 20 hours of special features. It’s like a dream come true!
Friends is an American sitcom about six friends struggling to survive on their own in Manhattan. In each episode, they find the companionship, comfort and support from each other to be the perfect solutions to the pressures of everyday life. The series stars ‘The Ones That Were There For You’ for ten seasons strong: Jennifer Aniston as “Rachel Green,” Courteney Cox as “Monica Geller,” Lisa Kudrow as “Phoebe Buffay,” Matt LeBlanc as “Joey Tribbiani,” Matthew Perry as “Chandler Bing,” and David Schwimmer as “Dr. Ross Geller.” Friends has also featured many notable guest stars including Tom Selleck, Aisha Tyler, Jon Favreau, Anna Faris, Hank Azaria, Bruce Willis, Reese Witherspoon, Christina Applegate, Sean Penn, Jon Lovitz, Alec Baldwin, and many more. Friends was created by David Crane and Marta Kauffman and aired on NBC from September 22, 1994 to May 6, 2004. The series was produced by Bright/Kauffman/Crane Productions, in association
Facebook
Twitter
Pinterest
LinkedIn