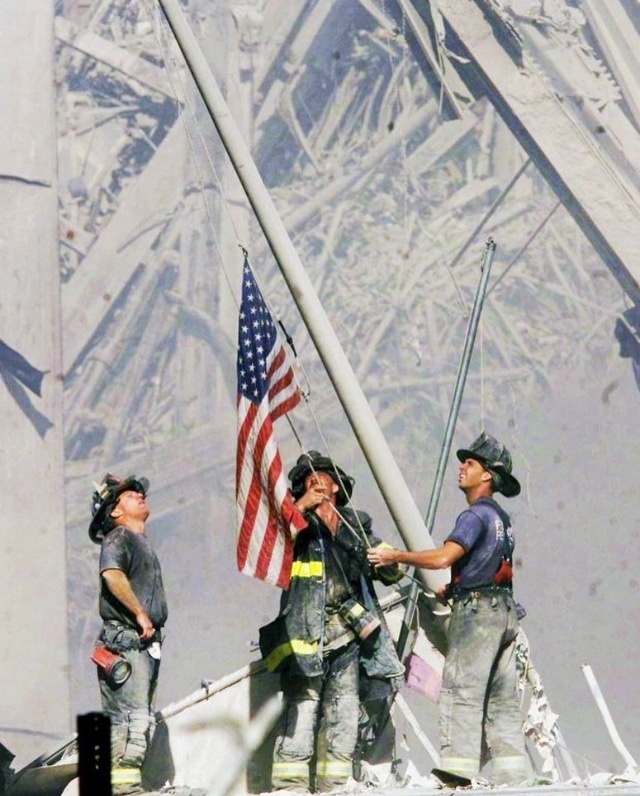 As you are well aware, today is the 18th anniversary of the 9/11 attacks, a day that, like Pearl Harbor, will live in infamy. The day our nation was attacked by the faceless coward called terrorism. I’ll never forget this day America changed, nor will I forget all of those who died too soon in the name of freedom. They all are heroes in my heart and deserved to be remembered as the wonderful people they were.

I still can close my eyes and remember that day: what I was doing, what we were talking about that morning and what I wore when I found out the planes had hit the towers. My friends and I were sitting in the cafeteria, slowly getting ready for class. My roommate had already gone to her own class and a few of us were still sitting, finishing our food and discussing the new TRL video when another friend came running into the cafeteria screaming that the towers were hit, there was smoke by NYU and her brother was missing. We all looked at her wondering what she was talking about, not even thinking of terrorism. We had only thought it was an off course plane or something. Then someone else came over and told us about the second plane. I barely remember throwing out my trash before running upstairs to watch the news coverage. As soon as I got up there, I heard the words that would change a nation: terrorism. I turned to the professor standing next to me and asked her what she meant. She repeated herself and said we were headed to war. I remember still staring at the TV trying to reach my father, who was an NYPD cop at the time and getting no answer. I tried endless times as I ran to my dorm room, this time to attempt calling my mom to see what she knew. She told me the same thing: terrorism. She told me my father was ok, but was going back to the city to help out, as were my cousins and neighbor (also NYPD cops) As we watched the coverage on TV, from the next two planes hitting the Pentagon and in Pennsylvania, to President Bush addressing the nation, me in the dorms hugging my friends, and her in the kitchen, I knew the world would never be the same.

That day America saw the face of evil for the first time, and we knew that our lives were changed forever. We were all scared, all concerned for our loved ones, wondering if they were going to be ok and if we would ever see them again. That day, as we witnessed the tragic events that changed our country,my friends and I realized we no longer lived in an innocent world where we only worried about impressing some cute guy or what video was number one on TRL. Those innocent days were gone, and we were faced with the harsh reality of the real world. I remember sitting in one of the dorms, holding a housekeeper’s hand as she waited for her daughter to call. I remember that night, at the school’s candlelight vigil, crying with people I barely knew and comforting and praying for those who still awaited words on loved ones I remember thanking God my friends and I cancelled plans to go into the city that day for a concert, and that my father decided he was too tired to run that one extra errand that would have stranded him in the city. I recall when my father told me the horror stories of being at Ground Zero, and how 3 of his own lost their lives that day, leaving behind families, friends and loved ones, including young children.

I also remember hearing the names Osama bin Laden and Al Queada for the first time, wondering who exactly they were and why they hated us so much. I mean, I was only seventeen at the time. I just couldn’t understand why these terrorists wanted us dead. I barely even knew terrorism existed. I just wished I could turn back time and have what was left of my childhood innocence back, but I knew it was impossible. These thugs violated our country and there was nothing we could do except unite as one. And we did. Although we still have our issues and in some senses seem divided, that day united us as one, then and forever. No longer did it matter that we had different beliefs, skin color or heritage. We were all Americans, and it was time for us to remember that we were one nation, under God.

Five years later, I went to the ceremony near Ground Zero (where the bells were being rung) before work and it was one of the most surreal experiences of my life. I had walked out of Starbucks at exactly 8:46 and somehow found my way to where the bells were being rung and listened as the names of those who died were being read. I just cried my eyes out, it was one of the most moving moments I ever experienced. Seeing cops, families of victims and former WTC workers gathered made me realize how short life is and how important it is to tell people you love them, tomorrow might not ever come. I also saw the bus called Light A Candle for September, which honors all of the victims of 9-11 and the man told me how his brother made the bus to remember everyone. The bus was the most beautiful piece of art I’ve ever seen. It’s amazing how time went so fast, yet stood still at the same time. I can still close my eyes and remember the towers being hit as if it only happened moments ago. Reading the stories of victim’s families moved me as well, made me happy to see they are moving on and doing well, as if the family members they lost are cheering them on, telling them it’s ok and they are going to be fine. I also continue to thank God for bringing my own dad home instead of keeping him in the city as he had originally planned. He spent several days digging in the city, losing some of his own, but he is still a hero in my eyes.

This is not a day of politics, but a day to remember those who died for us, those who saved many lives for us. It’s a day to remember the values and freedom our country is founded on, to remember, no matter how different we are, we are still Americans, and that bond will stay with us forever. Today is a day we forget protesting the war, hating Bush and whining over gas prices. God bless America, then, now and forever.