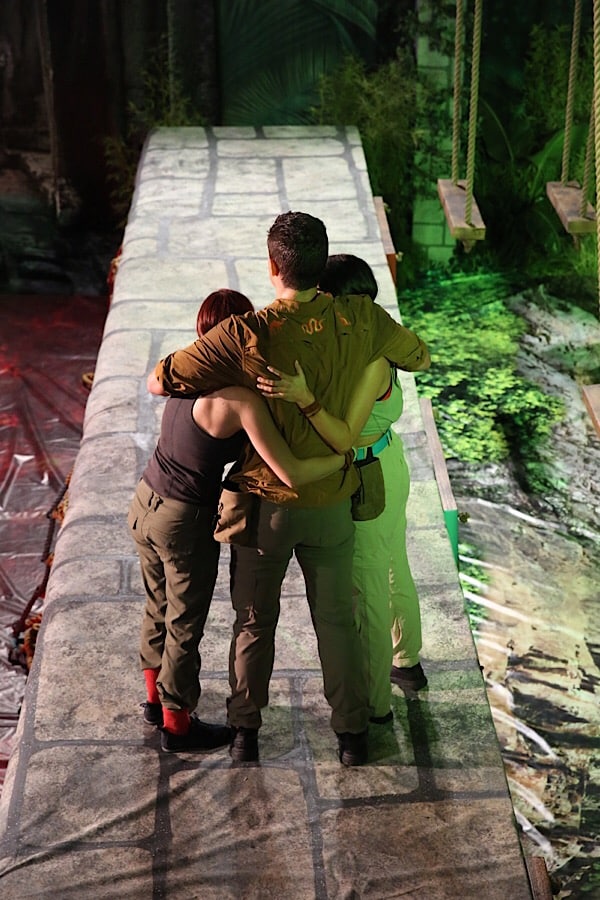 Ninety-nine days in the house. Three players left. One showmance still standing. We are at the finale of the 21st season of Big Brother. Michie, Nicole and Holly are left, with Michie having won the first HOH. We have Dr. Will on hand to talk to the jury.

The jury discovers that Cliff is joining them and are shocked, because they expected him to win. They also tease him about trusting Michie. The rest of the jury debate whether or not Michie is loyal and how he fooled many people in the house. However, they agree he played a good game….although Tommy is none too happy with his behavior.

Tommy thinks very highly of Nicole and Christie agrees she played a good social game. Cliff thinks she really brought it at the end, while Sis and Nick are confused about how she played the game.

HOH Part 2: They need to match dates to events that occurred in the house. Nicole seems to get a good head start, but Holly ends up winning.

HOH Part 3: It’s a showmance faceoff between Michie and Holly. They have to do a set of true or false questions based on videos.

Michie wins and surprising exactly nobody on the planet….evicts Nicole. Holly and Michie are excited to see their parents in the audience.

Nicole is okay with how it all worked out and says she learned a lot about herself while in the house. She is now in the jury.

The jury asks the final two questions. The first is about Michie’s jury management and Michie says it all fell apart on day 44 and everything he did was game related.

Holly says she never had a plan except to fly under the radar and not show her cards unless it was needed.

They want to give Michie a chance to redeem himself for his behavior toward women. Michie denies this and says he is just intense.

Holly is questioned again about her game and she says they played different games.

Michie thinks he deserves to win because he disarmed those around the targets before getting rid of said targets.

Holly thinks she deserves to win because she wasn’t a target and managed her relationships authentically.

The final two give their speeches and the jury votes.

After a talk with the non jury members, we find out the results. Kemi is upset over the comments made about her and Jack apologizes. Christie will apologize once she sees the footage because she doesn’t know what happened, while Michie agrees he is confused and apologizes for offending her in his game play. She thinks they should know why they are apologizing.

Michie is called out on his alleged racism and ageism in choosing the banished guests. He says it was simple gameplay.

Nick says he fell for Kat and Bella says he made her look stupid.

In a 5-2 vote….Michie won season 21 of Big Brother. Nobody is surprised at all.